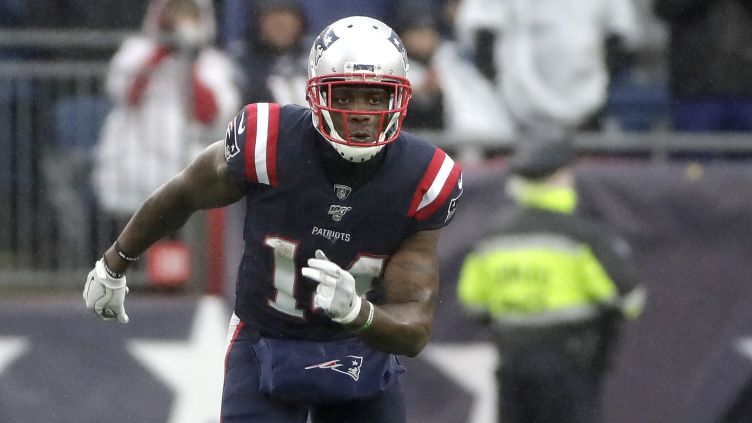 The Patriots debut for wide receiver Mohamed Sanu wasn’t a box-score hit, but we saw glimpses of what the veteran receiver will bring to the offense once he gets more comfortable.

Schematically, one of the bigger advantages that Sanu gives the Patriots are two highly-productive receivers between the numbers with him alongside Julian Edelman.

“We’ve always valued guys that can do more than one thing well, and I think we have a lot of guys that are able to do some different things in our offense,” said offensive coordinator Josh McDaniels. “Julian plays inside, and he plays outside. I think Mo [Sanu] has already done both as well.”

By positioning both Sanu and Edelman in the slot, the Patriots can pick on matchups and create traffic against man coverage while flooding areas of zone coverages.

Against Cleveland, Sanu ran 16 of his 26 routes out of the slot, and both of his receptions came from inside the formation.

Let’s go through an example from the win over the Browns. Brady ended up throwing the ball away, but you see still see the challenges the combination presents to opposing defenses.

The Patriots start in a trips formation to Brady’s left with Edelman (inside slot), Sanu (outside slot), and Phillip Dorsett (boundary) as the three receivers. The Pats have a zone beater called to that side of the formation, and they get quarters coverage from the Browns. The route combination for the Pats involves a clearout vertical from Dorsett to take the outside corner deep, a curl by Edelman to occupy the inside defenders, and an out-and-up by Sanu into the vacated area.

With Edelman holding two defenders in the middle of the field and Dorsett taking the deep coverage, it leaves Sanu uncovered on the left sideline with the zone successfully flooded.

As we roll the play, Brady gets skittish in the pocket and doesn’t allow for the play to develop downfield, but the Patriots will come back to that call in the future.

Here’s another example of both the double-slot look and Sanu’s high football IQ. Sanu is in the inside slot with tight end Ben Watson next to him to the trips side. The Browns bring a zero blitz, and with two slot receivers, the safety on the far hash has to rotate over to Sanu. Sanu quickly gets to the sticks and turns back to the quarterback so that Brady can hit him on the hot read with pressure in his face to convert on fourth down.

As another reminder of Brady’s greatness, Sanu told CLNS Media that his new quarterback warned him of that exact scenario earlier in the week. Sanu listened and was ready.

Along with operating on the same side of the field, having two machines between the numbers also presents exciting opportunities for crossing patterns against man coverage.

On Sanu’s 19-yard reception, Edelman starts on Brady’s right in a reduced split while Sanu is in the left slot. The Pats send Edelman on a shallow crosser with Sanu on an over route off of play-action. With the defense in man coverage, you like the odds of one of those two receivers out-running the defense across the field. This time, it’s Sanu, and Brady threads the needle to his new weapon in between two defenders.

The final piece to the puzzle in Sanu’s game is an under-appreciated skill that flew under the radar with the acquisition, and that’s run blocking.

Although most focused on his receiving skills, head coach Bill Belichick told me on Monday that the Patriots were well aware of Sanu’s abilities as a blocker.

“I think that’s always been a strength of his going back to college. He’s a strong, physical kid and he’s got good playing strength and he’s tough. I think he’s always been willing to go in there and get his hands dirty, be a tough physical blocker. Those guys, it’s kind of an underrated thing for receivers, but it really helps you when those guys do that, and they do a good job of it,” Belichick said.

For the Patriots, the coaches over the years have always said that there are three aspects of playing receiver in this offense: get open, catch the ball, and block.

“You can’t be a good receiver if you can’t do those two things [get open and catch], but that’s [No.] 1-2, and then 2A is blocking and contributing in other ways besides getting open and catching the ball,” Belichick added.

On Sunday, Sanu was on the field as a run blocker for nine snaps and sprung Sony Michel a few times on New England’s crack toss play.

Here, Sanu motions into the picture late on the right side of the screen. His job on the play is to “crack” block Browns defensive end Myles Garrett to seal the edge and allow left tackle Marshall Newhouse to pull in front of Michel. Sanu delivers a solid block on Garrett, which enables Michel to turn the corner and pick up eight yards.

Sanu only caught two of his five targets for 23 yards in his first game with the Patriots, and there were some growing pains as he learns the offense and builds chemistry with Brady.

But in his 37 snaps, we saw flashes of what he brings to the team.

1. Browns, Jets Bring the Heat at Tom Brady and the Patriots Offensive Line

In their last two games, the Patriots played two of the most blitz-happy defenses in the NFL in the New York Jets and the Cleveland Browns. As he has in the past, Brady fared pretty well against those aggressive pass rushes.

Although the numbers were solid, my guess is that teams will continue to throw blitzes and other disguised pressures at the Patriots’ offensive line until they start performing better as a unit.

On the lone sack they allowed against the blitz, the Browns gave the Patriots a taste of their own medicine with a zero blitz. Cleveland disguised it well with the slot corner lining up over Edelman in the right slot and then joining the rush at the snap. The Pats didn’t have enough blockers to engage all of the defenders rushing the quarterback, and Brady goes down on third down.

Upon review, the Patriots allowed a season-high 43.6 pressure rate against the Browns, which led to a very unhappy Dante Scarnecchia on Monday.

With the Browns bringing the heat at Brady, Patriots offensive coordinator Josh McDaniels adjusted in the second half by going down the field in the third quarter on screen passes.

On their third-quarter scoring drive, the Patriots got 68 of their 84 yards on two plays, both screen passes to running backs James White and Rex Burkhead on the same design.

The Patriots watched the Browns bring man pressure in the first half, so they aligned in a three-by-one set with a back to the strong side. Knowing the Browns would play man, they ran the lone receiver across the formation to clear out one side of the field and then dropped the ball off to the back. Both times the player in man coverage on the running back got lost in the chaos.

McDaniels and the Patriots staff are one of the best groups in the NFL at picking out weaknesses in the opponent during the game and adjusting to take advantage.

3. Cause For Concern With Patriots Run Defense?

The Patriots run defense had a difficult time with Cleveland running back Nick Chubb on Sunday, and although it’s not an excuse, the conditions were partially to blame.

Chubb averaged nearly a full yard after contact above his season average as the Patriots slipped off of him in the open field with 82 of his 131 rushing yards coming after contact.

In all, Chubb broke six tackles as a runner, but along with the weather, the root cause of Chubb’s success was the personnel the Patriots had on the field.

On five rushing attempts against New England’s dime defense (six defensive backs), Chubb averaged 11 yards per rush and gained 42 percent of his rushing yards on those carries. When the Patriots went with heavier personnel, Chubb’s rushing average was cut in half, albeit still very high.

The Patriots continued to play lighter fronts as they have all season against the Browns to take away Odell Beckham, Jr. and the passing game, but we could see that strategy flip this week with the Baltimore Ravens and Lamar Jackson.

4. How the Patriots Secondary Plays the Best Team Defense in Football

The Patriots secondary continues to impress with their individual talent and ability to play on a string.

Here’s an audio breakdown of how the Patriots defensive backs play to their help better than any defense in the NFL.

Here are quarterback pressures and run stops from Sunday’s win by the Patriots defense. The Pats pressured Baker Mayfield on 43.2 percent of his drop-backs.