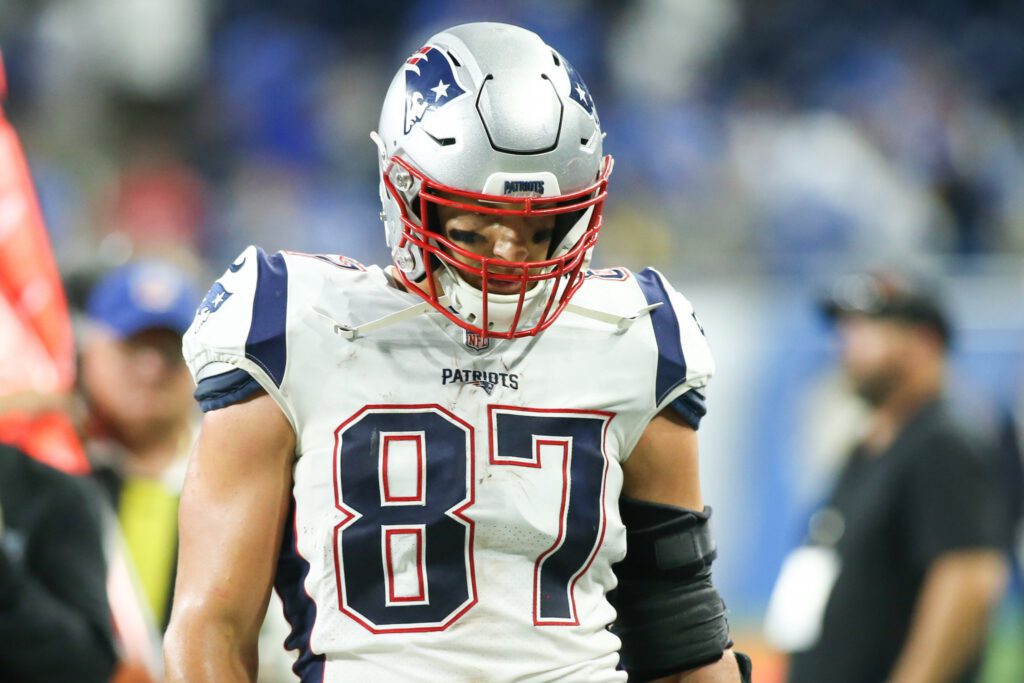 FOXBORO — The hot-button topic of the week in New England isn’t about the Patriots opponent on Sunday, the Miami Dolphins, but rather superstar tight end Rob Gronkowski.

After Sunday’s loss to the Lions, Gronk confirmed reports from Adam Schefter earlier that morning that he was nearly traded to the Lions in the offseason.

The confirmation from Gronkowski was a stunning deviation from the typical Patriot Way of not commenting on the inner workings of personnel decisions and outside reports.

Although Gronk’s comments say a lot about the current state of the relationships inside Gillette Stadium, former Patriots executive Michael Lombardi took aim at Gronk’s on-field production on his podcast this week.

Speaking about Gronkowski Lombardi said, “Gronk doesn’t have the same quickness that he once had…Gronk is more of a builder of speed now. People are playing for that.”

From this perspective, Gronkowski was never incredibly agile, and most of his speed always came from prolonged acceleration down the seam or over the middle.

However, where the former Patriots exec does have a point is on his analysis of how teams are defending Gronkowski this season.

Over the last two weeks, the Jaguars and Lions are aware that Gronkowski is like a freight train; when you give him time to build up speed he’s nearly impossible to stop, so to combat that they’re getting in his face and forcing the big tight end to run through multiple defenders.

And the two teams combined to hold Gronk to only six catches for 66 yards.

After the Patriots’ loss to the Lions, Gronk said, “Got to figure out how to get open no matter what coverage it is, and it’s going to take a little. But I feel like I’ve got to adjust and up my game up.”

But the question is what exactly are those coverage and are teams doubling him more often?

The narrative is that Gronk has seen an increased amount of double teams due to a lacking receiving core around him, and although Gronk has seen some dedicated doubles, he’s seeing bracket coverage or zone coverage far more often than man-to-man double teams.

Gronk is still receiving plenty of extra attention, with multiple defenders focused on him on every play, but it’s important to distinguish between double-teams and other types of loaded coverages.

Below, I will go through some of the tape from the past two weeks to illustrate how the Jaguars and Lions limited Gronk’s production:

The most common scheme the Lions used to check Gronk is an inside-out bracket.

The Patriots defense uses this coverage against top receivers on a regular basis, and they call it “cone” coverage.

On this play, you’ll see the Lions chip Gronk on his release at the line of scrimmage so that he can’t get a head of steam. Then, you’ll see the outside defender take his outside leverage on Gronkowski’s right, and the safety over the top come down to cut Gronkowski off from the inside. Gronk feels the outside defender on his right hip, so he cuts the route across the field as he should. But when he does, he’s met by the safety coming down in this cover-1 look. The coverage forces Brady to hold onto the football, and he’s brought down for a sack.

Former Patriots defensive coordinator Matt Patricia took a page out of Bill Belichick’s book to pull out the bracket schemes on Sunday night.

In a similar vein, one of the most effective ways teams have slowed down Gronk is with high-low bracket coverages.

The basis of this scheme is to put a defender underneath Gronkowski’s route with a safety over the top of Gronk to take away the deep throws.

Brady gets rid of the ball quickly here, so you don’t see the coverage develop, but you can see the strategy that the Lions implemented against Gronk (in-line right). Detroit has the end chip on Gronk on his way out of his stance, which is a strategy designed to slow down his release, and then the linebacker is about to slide underneath the route with safety help taking the deep responsibilities. Gronk is Brady’s first read on the play, but he quickly comes off of him due to the coverage, as he knows that the Lions have multiple defenders taking Gronk away from him. Instead, Brady is forced to dump the ball off to James White in the flat, and he’s immediately tackled for a short gain.

Both the Jaguars and Lions went to high-low brackets on occasion to slow Gronk down.

Against the Jaguars, Jacksonville was able to defend Gronk with excellent team defense in their zone schemes.

There were a few instances were Gronk saw man coverage with safety help, but for the most part, the Jags stuck to their bread and butter to keep the tight end to only two catches for 15 yards.

On this play, the Jags are in a basic cover-4 coverage. But two defenders focus on Gronk, as the underneath linebacker and the safety over the top are all working together to make sure Gronk doesn’t get the ball. This is more or less a high-low bracket, but it comes in the framework of a cover-4 scheme. Brady wants to throw the ball to Gronk, who looks like he’s open at first, but pulls it down when the linebacker slips underneath the route and most likely would’ve intercepted the pass. The safety over the top starts on top of Gronk in the deep part of the field and is there to take away any vertical routes if that’s where #87 ends up.

The Jaguars also did an excellent job of passing off Gronk in zone coverage by backing their linebackers off into intermediate level zones across the middle of the field.

Here, Gronk is going to run a corner or post from an in-line alignment. The Jags drop three defenders across the middle of the field, and as he makes his way down the field, they pass him off one-by-one obstructing Tom Brady’s throwing lanes to his favorite target by sitting underneath Gronkowski essentially making a wall between Brady and his tight end.

The Jaguars also used some dedicated double teams and aggressive man coverage at the line of scrimmage to throw Gronkowski off his game, but these zone schemes were the basis of their gameplan.

Much like Tom Brady, Gronkowski is feeling the effects of a talent-depleted supporting cast.

Opposing defenses are game planning and loading up on Gronkowski, forcing Brady to find other avenues to move the football through the air.

However, despite the extra attention, when asked what will help him get open Gronk said, “Myself. Going out there, adjusting to coverages, running faster, getting open and just working together as a team, as an offense.”

In response to a question about his mindset when he sees multiple defenders in his path, the tight end said, “Just got to go harder or you’ve got to take them away and let the offense execute what the offense has to do.”

The Patriots hope that the additions of wide receiver Josh Gordon and the return of Julian Edelman will open things up for the game’s best tight end.

But Gronkowski feels that he needs to elevate his game to help his team return to the win column.