Film Review: the Game-Plan Patriots Were At It Again in Super Bowl 53 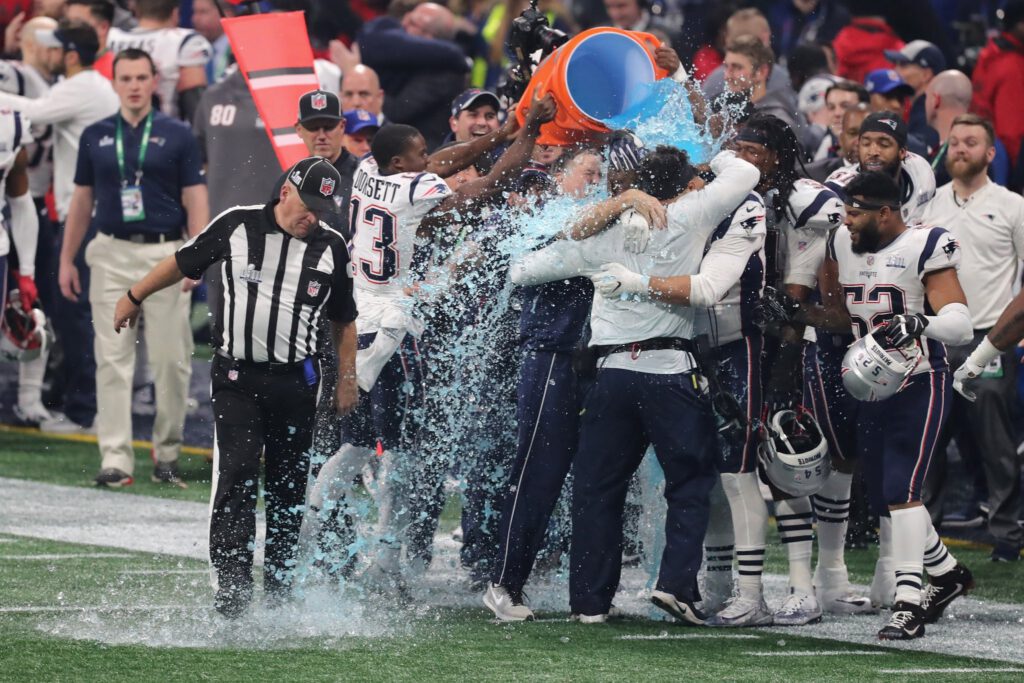 The 33-year-old McVay called the 66-year-old Belichick “the best” and Belichick said to McVay, “you’re taking over buddy.”

However, what McVay said next told us all we needed to know about the coaching matchup on Sunday.

“The way you guys are able to shift your identity and really still be able to figure it out week in and week out is unbelievable,” McVay told Belichick.

In the aftermath of Super Bowl 53, a 13-3 victory for Belichick and the Patriots, McVay’s pregame comments are dripping in irony.

The irony is that to capture his sixth Lombardi Trophy as a head coach, Belichick shifted his identity on defense once again, and a late-game adjustment by coordinator Josh McDaniels woke up the New England offense to break the stalemate.

McVay, on the other hand, stuck to his flawed plan offensively and lost the Super Bowl as a result.

The Rams offense was in their base 11-personnel (3 WR, 1 TE, 1 RB) on 36 of their 42 passing plays, which comes as no surprise since LA ran their offense out of that grouping 96 percent of the time this season.

According to Warren Sharp of SharpFootballAnalysis.com, quarterback Jared Goff averaged 5.6 yards per attempt in Super Bowl 53 on those 36 plays from 11-personnel.

Furthermore, the Patriots came into the Super Bowl allowing only 6.2 yards per attempt against 11-personnel, the third-best mark in the NFL in 2018.

In other words, the Rams and McVay knew they might struggle, and struggled during the game passing out of three wide receiver sets, and stubbornly did it anyway.

As for Belichick, the ultimate game plan coach threw out a successful strategy against league MVP Patrick Mahomes and the Kansas City Chiefs in the AFC Championship Game crafting a new plan that best suited their needs against the Rams offense.

Against the Chiefs, the Patriots played man coverage, either straight cover-1 or cover-1 double (on Tyreek Hill), on 27 of Patrick Mahomes’ 33 drop-backs (81.8 percent).

In the Super Bowl, the Patriots only played man coverage 50 percent of the time.

“Totally different,” Devin McCourty said of the game plan in the Super Bowl compared to two weeks earlier in Kansas City. “We switch every week. We don’t just do something because that’s what we do.”

Although the New England defense played zone plenty during the regular season, the stark contrast between the AFC Championship plan and the Super Bowl formula is staggering and speaks to the point that McVay made to Belichick before kickoff.

The week before the Super Bowl, I sat at a table with de facto defensive coordinator Brian Flores and picked his brain about the Patriots defense and the Rams.

My first question to Flores was why the New England coaching staff gravitated towards man coverage in the postseason?

In hindsight, I should’ve realized that he was telling the truth, but at the time his response felt like he was dodging the question.

To me, the Patriots played more man coverage because it best suited their personnel and allowed them to play aggressively.

“We try to do whatever it takes or whatever the best thing is to thwart our opponent,” Flores told me. “If it’s man coverage, if it’s zone coverage, if it’s blitzing…you can’t be one dimensional in this league. You have to be multiple.”

If I sat back and thought about it, I would’ve realized that Flores subtly hinted at the Super Bowl game plan.

Reading between the lines, he was saying, “yes, we played man against the Chargers and Chiefs, but wait till you see what we have in store for the Rams.”

Under McVay, the Rams offense is a big-play machine and a lethal play-action team.

And Goff averaged an NFL-best 10.0 yards per attempt on play-action passes.

To combat the explosive LA offense, the Patriots mixed in some quarters coverages to prevent the deep ball.

In quarters or cover-4, the defense drops four deep defenders splitting the field evenly across making it difficult to complete any deep passes.

On this play, the Rams ran traditional play-action out of a one-back set, and Goff wants to hit Robert Woods on a deep crosser. The Patriots drop into quarters coverage, taking away Woods with the two defenders in the middle of the field and linebacker Dont’a Hightower dropping underneath Woods’ route. Goff might’ve had a chance on a deep post to Brandin Cooks, but Gilmore isn’t in terrible position, and the pressure gets there forcing Goff into an errant throw.

In all, the Patriots ran quarters or the very similar cover-2 coverage 12 times on Sunday after completely abandoning split-safety calls in the AFC Championship Game.

Along with their split-safety calls, the Patriots played five pass plays in their more standard cover-3 zone.

When the Patriots do play zone, Belichick usually opts for the post-safety schemes rather than split-safety coverages, but they reversed that tendency in the Super Bowl.

Against the Chiefs, Jones shadowed All-Pro wide receiver Tyreek Hill as the Patriots opted to match the speedster with their “track boys” as the player put it after that game.

In the Super Bowl, Jones played 17 snaps at safety going from man coverage against one of the top wide receivers in the game to roaming the middle of the field in two weeks.

The Patriots moved their speedy cornerback to free safety to defend all the intermediate crossing routes that the Rams throw at defenses.

This season, Goff was the highest rated passer in the NFL on designed quarterback rollouts, and crossers were a big part of that success.

Here, the Patriots show a split-safety coverage and then rotate into cover-3 robber with Jones dropping down at the snap. The Rams run one of their rollout play-action schemes off of wide zone, and both Jones and Hightower are there to take away tight end Tyler Higbee’s crossing pattern. Also, peep at linebacker Kyle Van Noy blowing up wide receiver Josh Reynolds on the “slide” route at the line of scrimmage and defensive lineman Lawrence Guy running with Reynolds and Woods to deter Goff from throwing the ball to them later on. There’s nobody open downfield, and the Patriots nearly run the Rams quarterback out of bounds, but he avoids a sack by throwing the ball away.

The Patriots married their man and zone coverages with an aggressive five-man rush on non-play action passes to shut down one of the NFL’s best aerial attacks.

Belichick is seen talking to his defense on the sideline after the Rams tied the game at three apiece in the third quarter.

Among other things, Belichick implores his defense to “get vertical” in the running game.

To slow down the Rams’ wide zone rushing attack, the Patriots went from a two-gapping team that holds at the point of attack to an aggressive unit that gets upfield and makes plays in the backfield — another example of Belichick adapting his approach to his opponent.

All night long, the interior of the Patriots’ defensive front came downhill at the Rams’ potent rushing attack holding Todd Gurley and C.J. Anderson to 62 yards on 18 carries (3.4 average).

The strategy was to play a 4-3 even front with six players across the line of scrimmage. The alignment made it difficult for the Rams to execute combination or double-team blocks, and with sound gap integrity, the Patriots could play aggressively.

Here, nose tackle Danny Shelton feels the left guard try to “reach” him in the wide zone technique. Shelton uses a hand slap move to push left guard Rodger Saffold by him on his way into the backfield. Shelton’s quick penetration shuts down any cutback lanes for Gurley, and Van Noy goes around the tight end into the backfield on the edge. Combine those two upfield moves with Lawrence Guy and Deatrich Wise holding their ground against single blocks on the right side, and Gurley has no place to go on the play.

Step one for the Patriots defense was to shut down the Rams’ third-ranked rushing attack to put the game in Goff’s hands, and they did so with exceptional execution.

THE IN-GAME ADJUSTMENT THAT WON THE SUPER BOWL

McVay and the Rams had a poor game plan on offense, but their biggest mistake was doubling down on it once they realized it wasn’t working.

Although the Patriots offense struggled through the first three quarters as well, coordinator Josh McDaniels made an in-game adjustment that led to ten fourth-quarter points and the win.

“I think the real key breakthrough came when Josh [McDaniels] made a great adjustment,” Belichick said postgame. “We went to a two tight end offense, but we spread them out…not something we, I’d say, anticipated doing a lot in this game.”

On the game-winning touchdown drive, the Patriots ran three-straight plays out of 22-personnel (1 WR, 2 TE, 2 RB) with fullback James Develin and backup tight end Dwayne Allen in the game.

And as Belichick said, they spread out the Rams defense in an empty formation.

If Belichick didn’t anticipate doing that in the game, it was for a good reason, because it marked the first time this season that the Patriots used that personnel grouping with Brady in shotgun.

The Patriots hit three passes in a row tallying 49 yards using one of their favorite play-calls: Hoss Y-Juke.

The biggest of them all and the play that set up the games only touchdown was a 29-yard completion to tight end Rob Gronkowski.

On the play, the Patriots went to an empty formation with Gronk, Edelman and Dwayne Allen inside and running back Rex Burkhead and Develin out wide. Since the Patriots were in such a heavy grouping, the Rams and Wade Phillips matched New England’s personnel in their base nickel defense. The formation took the Rams by surprise, and there was confusion on defense before the snap. Scrambling to get set, LA settles on putting linebacker Cory Littleton on Gronk in man coverage, and Brady works the matchup throwing a beautiful seam pass to his tight end to set up the go-ahead touchdown.

To put the game out of reach, the Patriots stuck with the two tight ends with Brady under center and Sony Michel as the lone back in the backfield. This time, they ran it, and Michel gained 26 yards out of New England’s one-back power scheme.

The Patriots offense struggled to put up points for most of the night, but McDaniels found an answer late in the game when McVay simply couldn’t on the other side of the ball.