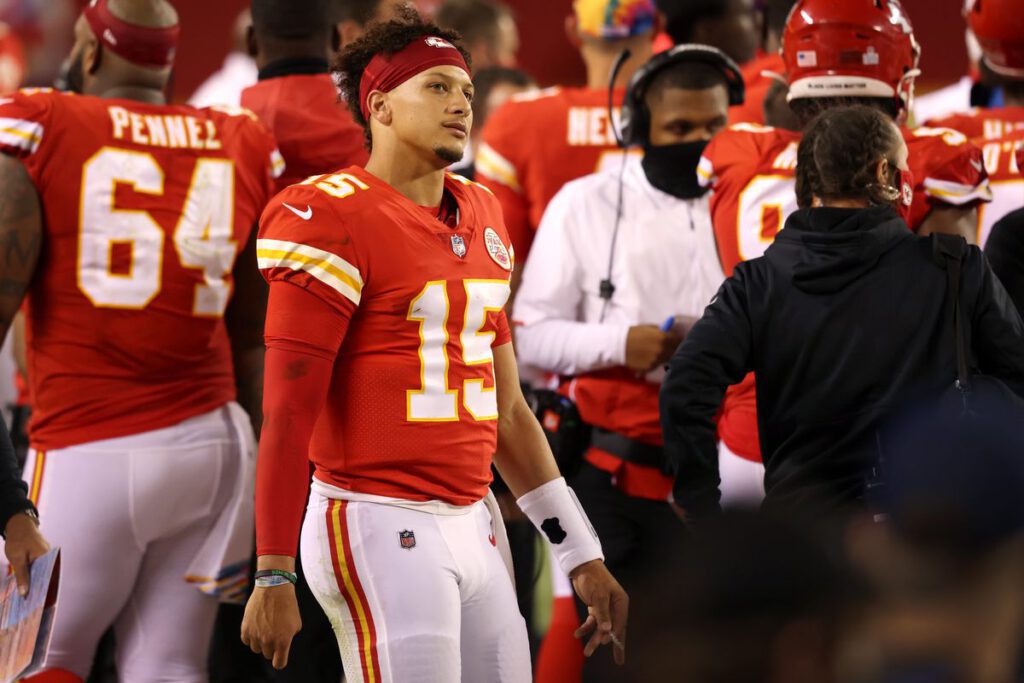 Chiefs quarterback Patrick Mahomes is a force that tore up the league the second he became the starting quarterback for Kansas City back in 2018.

Mahomes has a regular-season MVP award, a Super Bowl MVP and championship, and the most passing yards and passing touchdowns through a quarterback’s first 35 games.

The Kansas City wonder boy has a Pro Football Focus grade of 58.2 in four starts against Belichick, compared to a league-best 95.0 overall grade against all other opponents.

Chiefs head coach Andy Reid figures out ways to move the ball in the second halves of their matchups with New England, but Mahomes’s struggles against Belichick are real.

Belichick has new wrinkles for Mahomes to keep him guessing each time, and the Patriots defense is getting better each time at containing the high-powered Kansas City offense.

2018, Week 6 (the zero blitz game): in Belichick’s first matchup against a young Mahomes, he held the Chiefs to nine first-half points by sending cover-zero blitzes at Kansas City’s inexperienced quarterback. Mahomes, who was still figuring out how to read coverages and set protections, completed only 50 percent of his passes with a 3.9-yard average against the blitz. The Patriots shifted to zone defenses in the second half, and Mahomes rattled off 31 points in the final two quarters, but still finished with a 64.7 grade and two interceptions in the loss.

2018 AFC Championship (the “one double” game): after Mahomes carved up zone coverages, Belichick’s game-plan in the 2018 AFC title game was to play man coverage on nearly 80 percent of the snaps. The Pats doubled Chiefs speedster Tyreek Hill, who had four touchdowns in his first two games against New England, in their “one-double” coverage with speedy slot corner Jon Jones and safety Devin McCourty on half of the plays. Then put corners JC Jackson and Stephon Gilmore on Travis Kelce. Belichick transitioned to five-man pressures, only using the cover-zero blitz once, and it took Reid’s pick plays to open things up in the fourth quarter. Mahomes finished with his best grade against Belichick, 73.2, but lost once again.

2019, Week 14 (the Gilmore shutdown/cover-two game): here’s where Belichick started to find his groove against Mahomes. Last season, the Patriots deployed man and man-match coverages, only blitzing the Chiefs QB five times. New England put Defensive Player of the Year, Stephon Gilmore, on an island with Chiefs wideout Sammy Watkins. Gilmore was in the zone, and his ability to guard Watkins without help allowed the Patriots to put their safeties over the top of Hill and rookie Mecole Hardman. Belichick then began to sprinkle in cover-two structures along with cover-three when they went to zone coverage, something new every time. Cover-two on early downs is a good scheme against the RPO and motion heavy Chiefs, as it puts five defenders in short zones to defend quick-breaking routes and runs and sweeps on the edges. Although the Chiefs won the defensive battle, the Patriots held Kansas City to 23 points, and Mahomes finished with a 50.5 grade with a pick.

Belichick went full-circle with his game plan against Mahomes in their most recent matchup on Monday night after watching the Chiefs shred Baltimore’s blitzes the week before.

Belichick, who started by confusing Mahomes with exotic pressures in 2018, played seven or more defenders in coverage on 33 of Mahomes’s 36 drop-backs. The Patriots only blitzed Mahomes three times and played 17 snaps with a three-man rush and eight in coverage.

Knowing that Mahomes has developed a better understanding of how to defeat blitzes and completed several deep balls against the Ravens, Belichick forced the Chiefs to score on longer drives rather in one big play.

The Chiefs scoring drives consisted of 11 plays, eight plays, seven plays, and nine plays; long drives by their standards made possible by holding them to just one play of over 25 yards.

Kansas City only scored 19 points on offense, and Mahomes had the second-lowest PFF grade of his career (43.6) on Monday night.

Last week, the buzz word in the Patriots facility was leverage, and Belichick hinted that he’d focus on helping his defensive backs leverage routes during his weekly press conferences.

“They can out leverage you in a hurry, and once they get behind you, there’s not too many guys on that offense that you can catch. We’re going to have to do a great job of maintaining our leverage and our discipline and respect them,” he said.

Belichick combined man and man-match principles, sprinkled in cover-three and cover-two zones, and as is the case in all their games against the Chiefs, the Patriots DBs beat up the Chiefs receivers, putting a lid on their explosive passing attack.

The game plan’s foundation was New England’s cover-one man structures, but Belichick made it easier on his secondary to maintain their leverage by passing off Kansas City’s deep over routes.

Instead of chasing receivers across the field in man coverage, the Patriots cut off Tyreek Hill and Mecole Hardman to avoid foot races in space.

Plus, Belichick used extra defenders in coverage as robbers, basically splitting the field in half at the intermediate level to provide inside help at the sticks. The Patriots call this coverage “Bronx,” or cover-one double robber, which worked to perfection.

The Chiefs design this play with Hill’s deep over route as Mahomes’s primary read, stressing Stephon Gilmore’s man coverage by making him track the Cheetah across the field.

However, Gilmore passes Hill off to the post safety (Jason McCourty), replacing McCourty in the deep middle. Mahomes has nowhere to go with the ball when they pass off Hill. Devin McCourty and JC Jackson then bracket his second read, Watkins. Once Mahomes takes off, those robbers become de facto spies and close in plenty of time to stop him short of the sticks.

Here’s another example of “Bronx,” but this time, the two robbers are dropping off the line of scrimmage. The Chiefs ran two vertical routes rather than deep crossing patterns, hoping to get single coverage for one of their skill players, and the Pats played them straight up.

Although the inside vertical from number three holds the post-safety in the middle of the field, Jones has outside leverage against Hill’s slot fade, meaning Hill needs to run through him to get into his route, making it easier on Jones to stay over the top. Add in a walloping jam from Shilique Calhoun on Travis Kelce, and we have another incompletion on third down.

Another man-match coverage the Patriots implemented was a split-safety structure, or cover-two man, which helped them leverage intersecting deep crossing routes.

Kansas City tries to set up a big play on second-down with under-center play-action and Hill and Hardman running deep crossers. The Chiefs are hoping that they’ll catch the Patriots with a single-high safety, meaning only one crosser will have help to the inside.

Instead, the Patriots have two safeties deep, with Devin McCourty taking over Hardman’s deep crosser from Jackson and Jason McCourty forcing Hill to adjust his route as he’s waiting for him in the other direction. Mahomes has nobody open downfield, so he tries to extend a little longer, but eventually, his pass attempt is broken up by Ja’Whaun Bentley.

As we mentioned earlier, the Patriots only blitzed Mahomes three times, but they did run one zero blitz, their initial game-plan against him two years ago.

Leverage was once again the name of the game, as the Patriots passed off running back Clyde Edwards-Halaire’s motion into the flat with Adrian Phillips on the edge. Since Edwards-Helaire releases into the flat, that allows the McCourty twins to join the rush with six rushers against five blockers in pass protection. Jason McCourty gets a free run at Mahomes, who is forced to throw up a prayer for Watkins off his back foot with Gilmore in tight coverage.

The Patriots secondary played with extraordinary discipline, field awareness, and communication throughout the game to pass off motions and deep crossing routes.

We also saw their exceptional versatility on display, as the entire secondary rotated through different spots. For instance, Stephon Gilmore played wide corner, slot corner, and then rotated into the deep-middle on a few occasions. How many All-Pro outside corners play all over the defensive backfield like that? Jon Jones and Jason McCourty, known as cornerbacks, were playing legitimate snaps at free safety. There’s no other secondary in the league with that kind of flexibility, and it makes New England extremely difficult to decipher.

Although the Chiefs outlasted the Cam Newton-less Patriots, Belichick’s defense reminded us all that they can shut down any passing attack in the league when they’re on their game.

New England’s talented secondary is one of the NFL’s best and remains the only defense that has any answers against Mahomes.