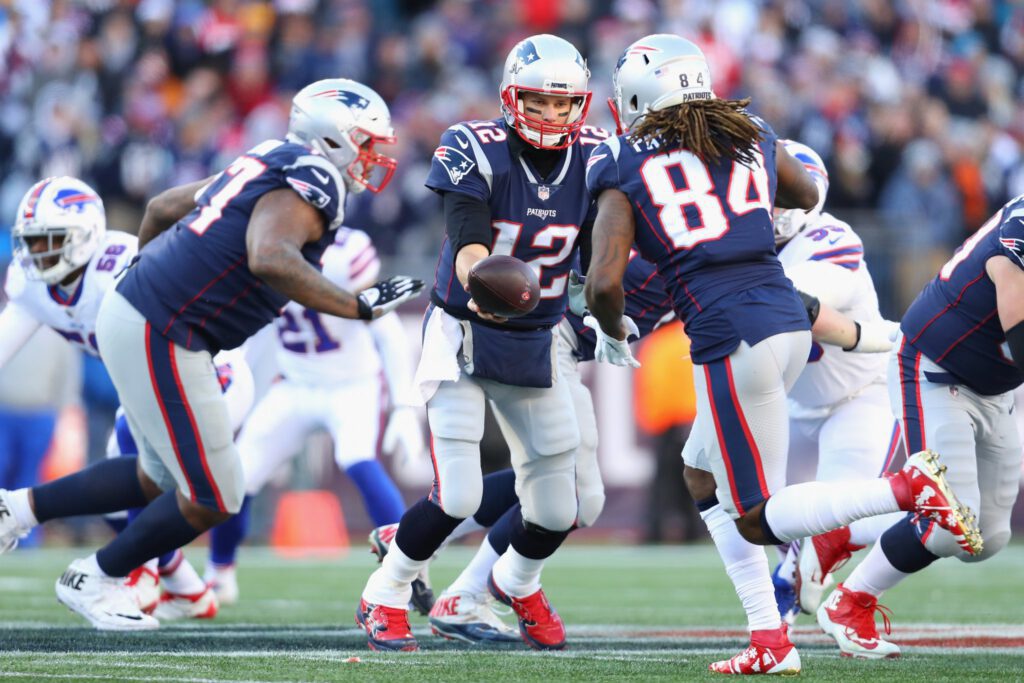 FOXBOROUGH — The New England Patriots with the greatest quarterback of all-time are turning into a run-first football team.

Well, not exactly, as Brady and company still throw the ball more than they run, but the Patriots do rank third in the NFL through 16 weeks in rushing attempts (29.9 per game).

And as apart of this running game renaissance for New England the wide receiver position has joined in on the fun with a heavy dosage of jet or speed sweeps adding another element to the offense.

Led by do-it-all threat Cordarrelle Patterson, the Patriots lead the NFL in rushing attempts (51) and rushing yards (324) from the wide receiver position and rank third in the NFL in jet sweep frequency averaging 8.8 yards per play on sweeps.

In Sunday’s win against the Bills, the Patriots ran five speed sweeps for 67 yards (13.4 yards per rush) against a Buffalo defense that was ill-prepared to handle Patterson (three jet sweeps for 54 yards) and wide receiver Phillip Dorsett’s speed to the edge (two jet sweeps for 13 yards).

“The amazing part about those plays is there’s some hit and miss to them, and some teams play them really well, and they might give up something else,” offensive coordinator Josh McDaniels told me.

“James’s touchdown run we faked one. Does that have any impact on the linebackers? Maybe. Maybe they run out there to the side and give up a crease inside which might’ve happened on that touchdown run a little bit.”

“There’s a lot of different things you can do with them. Some teams try to take them away more than others. Some teams try to adjust and defend them quickly during the game. We were fortunate we had a few different ways to try to do them yesterday, they all weren’t the same. And CP is obviously a good guy to do it with; he’s fast, he’s explosive, he can run and he’s hard to tackle. And Phillip had a heck of a run down there late in the game.”

When the Patriots acquired Patterson in the offseason, many thought it was solely due to his skill as a kick returner, but it’s clear that the Patriots had bigger plans for him on offense, and he has become a big-time factor.

As McDaniels noted, the impact of the jet sweeps goes beyond the yardage the Patriots get when they do hand the ball off to the receiver, usually Patterson, and James White’s touchdown was a perfect example.

On the play, the Patriots had tight ends Rob Gronkowski and Dwayne Allen on the perimeter as blockers. The Pats ran an outside zone scheme to the right, with the offensive line and running back faking a traditional handoff, but Brady handed it to Patterson. As you can see, the Bills were in man coverage, which gave the Patriots an advantage on these runs because the Buffalo defense defended them by chasing the ball carrier with a defensive back instead of bumping down the responsibility to a flat defender on the other side of the formation. Once Patterson gets the ball, all he has to do is out-run the corner lined up over him to the edge with the rest of the defense flowing in the other direction.

Three plays later, the Patriots faked the jet sweep to Patterson, and watch the impact the fake had on the defense. The linebackers at the second level all react to Patterson, remember that action is now in their heads after a few successful sweeps, but this time the Patriots ran a traditional power handoff to running back James White. With the linebackers already out of their gaps, White follows a pulling Shaq Mason through the hole, and all Mason has to do is kick out a linebacker that’s already out-leveraged to spring White for the touchdown.

Although Buffalo defended the passing game well, the Patriots got the Steelers with another complement to their fly sweep package.

On Chris Hogan’s 63-yard touchdown, the Patriots incorporated a play-action fake with an orbit motion from wide receiver Julian Edelman. Brady fakes the handoff to Burkhead and the end around to Edelman which freezes the linebackers and interior defensive line. When the Steelers bust the coverage downfield, there’s nobody underneath Hogan’s route at the second level with the front seven focused on the backfield making the throw that much easier for Brady.

“I think most of the things you try to do in the NFL nowadays is build in complement to what you’re doing,” McDaniels said. “So if you’re running these style of runs then you have to try and complement it with something off of those runs, or if you’re throwing a lot of this pass, then you might have to complement that route with something that gives the defense the same look, but it’s a different route. We always try to be conscious of that.”

“Our guys do a really good job of making sure they bring that information to us during the week and say, ‘hey this is something we’ve shown a lot, what about this?’ Any idea is a good idea. We try to encourage these guys to be imaginative and creative and also protect the things we are really good at because if you never protect them, at some point your going to stop being good at them because they’re just going to defend the heck out of them. We are trying to be mindful of that as long as it’s something we feel we are going to execute well.”

After Sunday’s win, head coach Bill Belichick praised the receivers and the tight ends’ blocking on those jet sweep handoffs.

“The receiver running plays which, again, involve a lot of receiver perimeter blocking which is critical to those plays. I thought Julian, Chris [Hogan], Rob [Gronkowski], Dwayne [Allen] were out there some too…there were a number of plays where the ball was at the edge so fast that it was really all about the perimeter blocking. Those guys did a good job,” Belichick said.

“It’s a fundamental that we definitely take a lot of pride in,” wide receivers coach Chad O’Shea told me. “We talk to the players a lot and emphasize not only the passing game but the run game, and it’s an area we can display our unselfishness and our team-oriented attitude to the team by our effort in the run game.”

“I don’t think there’s a better way to show that you’re a team player than to give great effort and finish in the run game, and I know the guys take a lot of pride in that and know they can be the difference in blocking downfield.”

Although all of the Patriots’ receivers contributed, it’s hard to miss the impact that wide receiver Julian Edelman had in the running game in the win against the Bills.

On Patterson’s first carry, a 12-yard gain, Edelman’s block was essential to the success of the play as he blocked the slot corner on the perimeter nearly seven yards downfield. If Edelman doesn’t seal that block, the slot corner likely cuts off Patterson’s path to the sideline.

As you’d expect, O’Shea said that Edelman’s skill as a blocker stems from his fiery and competitive personality.

“He’s obviously very competitive by nature which allows him to be a good blocker, and I think that’s probably the most important trait you can have is to be competitive and give great effort. That’s something he’s surely done in other areas of his play, and this is just another area that he uses his strengths of being a hard worker and very competitive, and it helps him in the run game,” O’Shea said.

And then there’s the tight ends, Gronkowski and Allen, who both are among the best in the league at their position at blocking in the running game.

On Patterson’s longest rush of the day, a 27-yard gain, it was the two tight ends on the perimeter leading the way.

“It’s team execution and that comes from a lot of reps on the practice field, a lot of time spent in the meeting rooms to get those things right,” Belichick said.

McDaniels told me that the Patriots will incorporate jet sweeps and other complements off of those actions as long as they’re successful but did note that, “you can’t get speed sweep happy. You can’t go to the well too many times because at some point you’re going to have a bad play.”

As the Patriots gear up for the playoffs, their passing offense might not be hitting on all cylinders, but the running game continues to be a strength thanks to an array of play calls that threaten the defense from every angle imaginable.