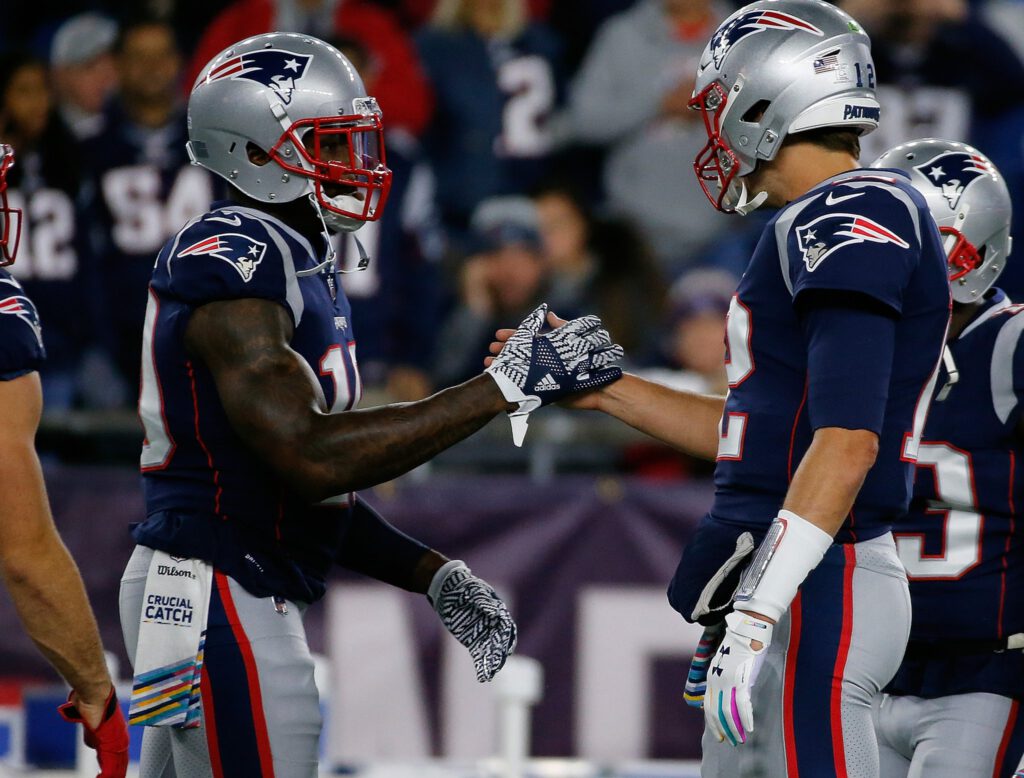 When the Patriots acquired wide receiver Josh Gordon in September, we knew it would take some time for the former Pro Bowler to get up to speed in New England.

Gordon was inactive in the loss to the Lions and played only 18 snaps in consecutive games the following two weeks, but we saw the receiver they call “flash” on full display in Week 6 against the Chiefs.

The former Browns star played in 81 percent of the Patriots’ snaps on Sunday night (63 of 78) and ran 37 routes.

“It was fun, honestly,” Gordon said of his first extended action with the Patriots. “I think we were preparing for that all week at practice. I was expecting a little heavy of a workload, so I was just glad to have the opportunity to go out there and play.”

But it wasn’t just the increased workload that made this week different for 2013 All-Pro; the Patriots also expanded his route tree.

Gordon ran 14 different routes, and by my formula, clearly “won” the matchup with the defender on 12 of his 37 routes (32.4 percent), which isn’t an elite percentage but certainly enough to make an impact.

And as we’ll discuss, Gordon’s presence alone opened up opportunities for other receivers to make plays for quarterback Tom Brady.

Below, we’ll go through the tape to highlight the good and the bad from Gordon’s performance against the Chiefs:

As you’d expect with the nickname “flash,” Gordon’s go-to route is the go ball, or when moved inside to the slot, a seam route.

The Chiefs were aware of Gordon’s ability to get behind the secondary, but he was still able to create separation downfield on Sunday night.

One of those instances was on a drawn defensive pass interference call that set the Patriots up for a touchdown in the second quarter.

On back-to-back plays, the Chiefs had cornerback Steven Nelson in single coverage on Gordon without safety help, and Brady made them pay the second time.

Nelson is in press man coverage against Gordon at the bottom of the screen. The Pats wideout likes to use an exaggerated crow-hop to release into his vertical routes. The crow-hop allows him to create separation to the sideline and causes Nelson to jam him late in Gordon’s route stem. Nelson does a solid job of running and pressing Gordon to the sideline, but Gordon creates late separation when the ball is in the air. Once Nelson feels Gordon stacking, he goes into a diving tackle making contact with Gordon before the ball arrives. The ref throws the flag, and this play is as good as a 37-yard completion for the Patriots.

The Patriots almost got Gordon behind the defense again on a seam route from inside the formation in the second half, but Brady underthrew him.

Gordon runs a terrific route here. He draws the matchup with Chiefs defensive back Jordan Lucas and goes right by Lucas at the top of his route. Gordon stems with a hard vertical push to Lucas’ outside shoulder, which causes the Chiefs corner to hold his outside leverage, and then curves the route across Lucas’ face up the seam. Then, Gordon leans toward the sideline to stack (get on top of) Lucas, and creates plenty of separation with his speed and route running. If Brady throws this ball ahead of Gordon, it’s a long completion, but Gordon deserves credit for tracking back to the football in the air to prevent an interception.

Tom Brady didn’t complete a pass on a go route to Gordon on Sunday night, but you can see that the opportunities to do so are there.

The one route that the Patriots are clearly trying to establish with Gordon is a slant.

The former Brown is terrific at running slants, and the Patriots can use that to their advantage in multiple ways.

Although we haven’t seen Gordon run a double-move (slant-and-go) yet, it’s fair to assume that those are coming in a situation where the Pats need a big play.

For years, the Patriots have thrown slants to in-breaking perimeter receivers off of play-action, and that has quickly become easy pickings for Brady and Gordon.

Thanks to a great angle from the NBC broadcast, we can see the nuance in Gordon’s route running on slants. He starts by taking a hard jab step toward the sideline with his outside foot. Gordon then breaks inside to attack the cornerbacks inside shoulder and makes another cut to break the route off on a 45-degree angle over the middle leaving Orlando Scandrick in the dust. And for good measure, Gordon shows off his tremendous hands snatching the throw out of the air away from his body. Put that one on the teaching tape.

So far we’ve gone through plays where Brady targeted Gordon, but he’s also making an impact when he’s not targeted in the passing game.

On Chris Hogan’s huge third-down conversion in the fourth quarter, Gordon’s presence on the field created the one-on-one matchup for his teammate.

Gordon is in the slot next to the motioning Julian Edelman at the bottom of the screen. He’s going to run a corner route from a slot alignment, and the safety in the middle of the field immediately runs toward Gordon to provide help over the top. That leaves Hogan in single coverage with no safety help on the other side of the field, and Brady goes to that matchup for a critical 42-yard gain and a first down.

Similarly, Gordon also attracted extra attention on the Patriots’ game-winning drive as you see the safety come up to provide support in the middle of the field where both Gordon and Gronk release into the route pattern. That leaves the sideline wide open for running back James White who then picks up some extra yards by making it tough on the linebacker to bring him down after the catch.

There are numerous instances of Gordon creating space for others both by demanding safety help and by the Patriots utilizing him on clear-out routes to throw into the vacated areas.

Gordon’s performance against the Chiefs was a step in the right direction, but there were still a few signs of growing pains as he continues to build chemistry with Tom Brady.

On the Patriots’ opening drive, Brady threw two incomplete passes intended for Gordon, but one of them was a clear miscommunication between quarterback and receiver.

Here, Gordon is level with the corner, so Brady throws the back shoulder. With Brady, if cornerback is level, or on top of you, the receiver always has to be aware of the possibility that Brady could throw the back shoulder. Gordon has only been here a few weeks, and those types of timing and silent communication routes could take a while to get down pat. On a positive note, having that type of miscommunication in a game is a good learning experience for Gordon.

Another teachable moment for Gordon came later on in the game on a red zone target. The Chiefs double Gronk at the top of the screen and defend the bunch set at the bottom of the screen with an inside-out zone. That leaves two-high zone defenders that bracket Gordon in the back of the end zone. Brady throws the ball into the soft spot between the two defenders, and instead of stopping his out route, Gordon continues toward the back pylon. Gordon runs right into coverage by continuing toward the sideline. If he sits down in that pocket, he has an opportunity to make this catch for a touchdown.

When properly executed, these types of wide receiver screens are perfect for players with game-breaking acceleration as they create a lane for the receiver to break into the secondary.

The Patriots haven’t had flawless execution when targeting Gordon on tunnel screens yet, but you can see how they could be useful.

On this play, you see Gordon fake an outside release before swinging back around toward the quarterback, which is by design to give the offensive lineman a few extra seconds to get out to their blocks. However, when Gordon catches the ball, right tackle Marcus Cannon sets his block to the outside, and Gordon runs straight ahead. There’s no way of knowing who’s to blame here, but one of the two players makes the wrong decision (h/t @chatham58).

Some will also ask about the failed fourth down conversion on the opening drive, but as you can see here, Gordon is held at the top of the route which threw the timing off.

And last week against the Colts, Gordon carried his route too far downfield before cutting back to Brady, and it threw off the timing of the route once again.

Later on, in the game against Kansas City, the Patriots came back to a similar route to the opposite side and Brady hit Gordon for a nine-yard completion. Progress.

In the box score, Gordon led the team with nine targets but only managed five catches for 42 yards (8.4 average).

However, when you account for the 37-yard defensive pass interference penalty, the space he created for others, and some missed opportunities; you can see the makings of a dynamic receiving threat for the Patriots.

The Pats gave us a heavy dose of what Gordon’s role in the offense will look like moving forward as he gives them a legitimate perimeter threat that can run every route on the route tree.

As they continue to integrate him into the offense, the Patriots have asked Gordon to beat coverage on vertical routes without much help from the scheme.

Over the next few months, it will be interesting to see how offensive coordinator Josh McDaniels designs ways to get Gordon some easier shot plays in the offense.

We knew it when the Patriots acquired Gordon last month; the sky’s the limit for him in this offense.