Film Review: Julian Edelman is Picking Up Where He Left Off Before ACL Injury 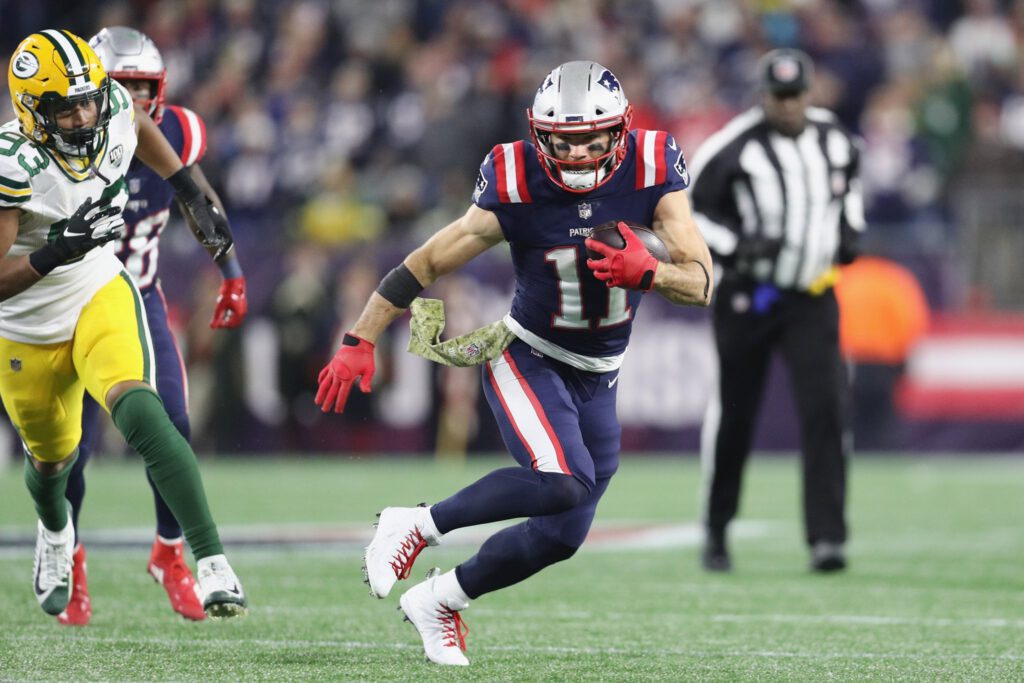 FOXBOROUGH — Amidst an offensive drought by their standards, not many people are discussing the good things about the Patriots offense.

However, 14 months removed from a tear of his right ACL, wide receiver Julian Edelman has been as productive as ever in six games this season.

Plus, Edelman has quickly regained his form in the slot, averaging 1.69 yards per route run out of the slot this season (ninth among 25 qualified wide receivers).

“Julian works really hard and loves football, he loves to compete,” said Patriots offensive coordinator Josh McDaniels. “He comes in every day and wants to try to get better at his profession, at his job. We ask him to block, we ask him to catch passes, we ask him to do a lot of different things here, and he’s always willing to take on whatever role we give him.”

Since Edelman’s return, the Patriots offense has improved dramatically in many key areas.

As you’d expect, Edelman’s presence has done wonders for Patriots quarterback Tom Brady, and Brady explained what makes Edelman one of his favorite targets back in October.

“I know his body language. I know his ability to get open, and my confidence in him. He gets open so quickly,” Brady said. “I think that’s the thing about Julian, his explosiveness in his routes and in and out of his breaks; it’s really comforting for a quarterback to see a receiver get open really early in a route.”

The 32-year-old Edelman is one of the league’s best route runners, and his ability to create separation both against man and zone coverage is still top-notch.

On average, Edelman creates 3.6 yards of separation per target according to Next Gen Stats, which leads the Patriots.

Below, we’ll go through Edelman’s six games of tape to highlight what makes him such a lethal threat for the Patriots offense:

Throughout his career, Edelman’s calling card has been his route running, and his understanding of how to beat defensive backs based on the type of coverage and leverage is outstanding.

Here’s an excellent example from the Patriots’ matchup with the Bills in Week 8. Buffalo cornerback Phillip Gaines is in man coverage against Edelman working out of the slot. Gaines wants to be physical with Edelman at the line of scrimmage, so the Pats wideout fights power with footwork, which is always the key to getting off press coverage. Edelman gains ground off the line of scrimmage then gets on Gaines’ toes while stemming vertically into Gaines’ outside leverage. Then, Edelman breaks at the top of the route after leaning into Gaines’ body with a hard in-cut while staying even on the angle across the field and hauls in the pass for a first down.

The Patriots wideout has also developed into a big-time weapon off of play action, and his route running shows up there as well.

On this play from Tennessee, Edelman is matched up against old friend Logan Ryan. Edelman goes with an inside release here which gets Ryan to slide to his inside shoulder. Once Ryan commits, Edelman quickly jumps outside of Ryan’s frame to get the Titans cornerback off-balance and deceptively cuts inside on the dig at the top of the route. After he beats Ryan in his stem, you can see Edelman’s explosiveness to separate away from the defender.

In terms of route running, Edelman is the very best the Patriots have to offer, and he’s among the best in the league.

Along with his ability to separate against man coverage, Edelman also has a tremendous feel for finding openings against zone schemes.

The Pats wideout is terrific at adjusting post-snap to different types of coverages and often finds space by moving around the secondary into vacated areas.

In Buffalo, Edelman had multiple catches of 20 or more yards, and this one demonstrated his abilities against zone coverage perfectly. Edelman runs an option route out of the slot. He’s likely thinking of sitting between the hook/curl defenders over the middle of the field, but the Bills are in a two-deep coverage (looks like cover-4), and as a result, Edelman knows the middle of the field is open. The Pats wideout diagnosis all of this in a matter of seconds, and breaks his route off into the wide open space behind the hook/curl defenders and in front of the safeties for a massive gain.

Edelman also finds space against the underneath zones, and here, he shows off his ability to scoop passes off the ground.

Whether it’s zone or man, Edelman consistently creates separation for Tom Brady and the Patriots offense.

Although Edelman’s yards after catch rate is slightly down this season, he’s still effective in this regard averaging 4.3 yards after the catch per reception, and his tenacious attitude shows as he fights for extra yardage on a regular basis.

Here, the Patriots call a screen to Edelman on third and one that’s one of their favorite goal line or two-point plays. However, Edelman takes the pass from Brady and runs through multiple defenders into the end zone. As you can see, Edelman is first contacted at the six-yard line by the Bears defense.

As his offensive coordinator stated above, Edelman competes in every situation and often wants it more than the players around him.

Finally, Edelman, as much as any Patriots receiver, makes his presence felt even when he doesn’t get the ball.

With Rob Gronkowski in and out of the lineup, Edelman has attracted extra attention on multiple occasions, especially in the red zone.

On this play, the Colts are in a cover-2 zone inside the ten with multiple defenders dropping across the goal line in hook/curl or curl/flat zones. Edelman runs a curl at the right hash, and three Colts defenders zero in on number 11, including the weak side linebacker. That leaves running back James White uncovered on the backside of the formation. With Edelman on the field, the deep safety has to break his assignment to try and keep White out of the end zone. Brady holds the defense by staring down Edelman before coming back to White for the touchdown.

Edelman’s play both with and without the ball has led to an uptick in production for the New England passing offense.

The Patriots offense as a whole hasn’t performed up to expectations over its last three games, and Tom Brady has been under fire for his play of late.

However, Julian Edelman’s productivity has remained constant, as the Pats receiver has eclipsed 70 receiving yards in three-straight games and has two 100-yard performances over that span.

This season, Brady has a 105.2 passer rating when targeting Edelman and has yet to throw an interception on a pass intended for arguably his most reliable target.

On the one hand, the eye test would tell you that Edelman still has another gear as he continues to distance himself from a torn ACL last August, especially when it comes to his quickness in and out of breaks.

But on the other hand, Edelman’s numbers are as good as ever, and his 2018 season is beginning to rival his career-best 2015 campaign from a production standpoint.

When the Patriots offense returns to full health, Edelman will be joined by tight end Rob Gronkowski and a Pats running game firing at all cylinders.

With all the pieces in place, and the potential that Edelman could find that sixth gear, opposing defenses will have their hands full with the Patriots offense down the stretch.