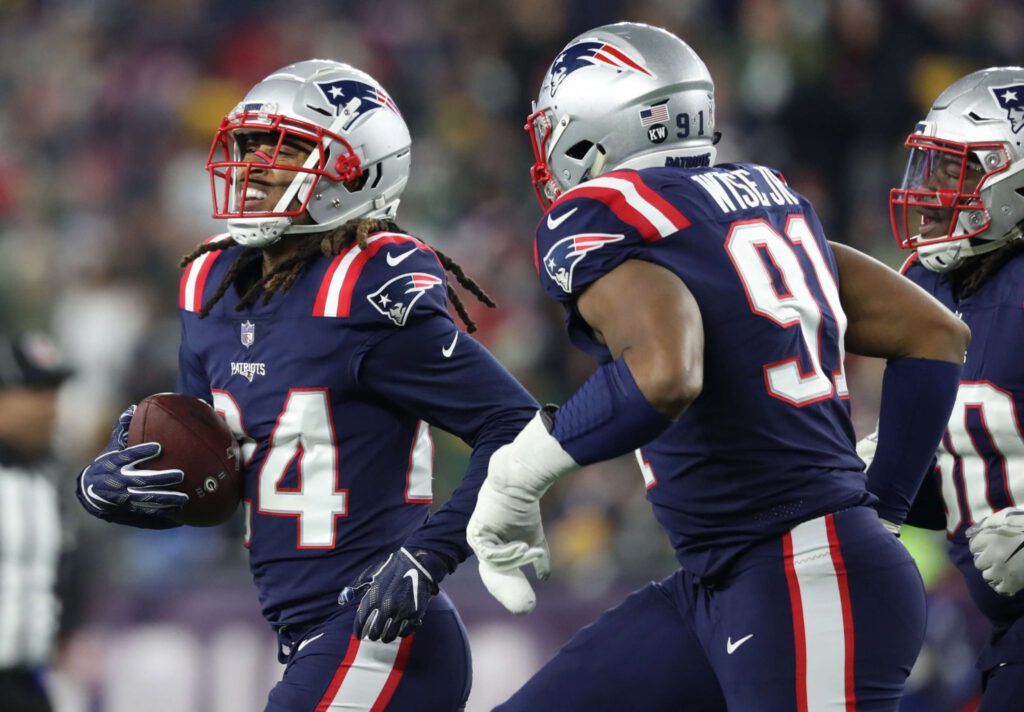 FOXBOROUGH — The first four games of Stephon Gilmore’s Patriots career were a disaster.

The Pats cornerback was lost, unable to grasp the defensive schemes of his new team that inked him to a five-year, $65 million deal in free agency that took everyone by surprise.

However, since Week 5 of last season, Gilmore has been worth every penny to the Patriots and is playing like a bonafide number one corner this season.

The Patriots’ coaching staff saw a budding star in Gilmore even when he was struggling in September of last year, and this season, he has taken his game to another level.

Through nine games in 2018, Gilmore’s 86.4 overall grade from Pro Football Focus ranks fifth among cornerbacks (min. 60 snaps). The seven-year pro is tied for the league lead with 12 pass breakups, and over the last month, he has dominated his matchup mostly against the opposing team’s number one receiver.

On Sunday night, Gilmore tracked Adams on 33 of his 48 pass routes, and the receiver that said nobody could cover him earlier in the week had a season-low 40 receiving yards with only 15 of those yards coming against Gilmore in coverage.

“He was pretty good,” Gilmore said after the game. “But I play my game regardless of who I’m going against. I didn’t like what he said earlier in the week. I kinda took it personal a little bit. But he’s a good receiver.”

“Yeah, I thought Stephon did a real good job on him. It’s tough. He’s an excellent receiver. He does a lot of things well,” said Patriots head coach Bill Belichick. “I thought Gilmore played him very well, played him with good technique.”

Below, we’ll go through some of the film from Sunday night’s win over the Packers to illustrate how dominant Stephon Gilmore was for the Patriots:

At six-foot-one, Gilmore has the necessary height to match up with bigger receivers like Adams, but he’s also a burner with 4.38-speed, and Gilmore uses that speed in multiple ways.

Gilmore’s elite acceleration allows him to recover or make up ground when he’s trailing his opponent in coverage.

On his first quarter pass breakup, Gilmore is matched up in man coverage with Adams in the inside slot at the top of the screen. Adams runs a corner route to the back pylon, a tough route to cover from inside the formation, and Gilmore loses ground when he collides with teammate Duron Harmon downfield. Instead of giving up on the play, Gilmore fights through the contact, turns on the jets to close the gap, and dives in front of Adams to save a touchdown making a terrific play on the ball.

The Pats cornerback also uses his speed to carry receivers on vertical routes and often forces the ball elsewhere when teams try to take shots downfield.

Here he is again on Adams at the bottom of the screen in the fourth quarter. At this stage of the game, the Packers are down two scores, and Aaron Rodgers wants to cut the deficit in half with one play. However, Gilmore reads the vertical release, he probably was protecting against the deep ball, and quickly flips his hips out of his backpedal to stay in-phase with Adams up the sideline. Rodgers has to pull the ball down with pressure in his face and ends up throwing an incomplete pass to his tight end.

Gilmore’s physical tools (speed, body control, hip fluidity) are what made him a first-round pick in the 2012 draft and a big-money free agent in the 2017 offseason.

Along with his speed, Gilmore’s fluid hips allow him to change directions in coverage efficiently.

This time, Gilmore is matched up with Green Bay wide receiver Marquez Valdes-Scantling at the bottom of the screen. The Packers rookie tries to beat Gilmore with a stutter-and-go double-move to no avail. Gilmore stops down in his backpedal to match the route and then transitions his hips upfield to stay over the top of Valdes-Scantling’s route. Rodgers looked to tight end Jimmy Graham over the middle, but Gilmore’s coverage was still superb.

Now Gilmore is back on Adams at the top of the screen in a stack alignment. Adams runs a dig route over the middle, and you see Gilmore match him every step of the way. Gilmore sits on Adams’ outside shoulder to the top of his stem, changes directions easily to head over the middle, and recovers to get underneath the route. Rodgers made an impossible throw to Valdes-Scantling along the sideline, but this was good coverage by the Pats secondary.

Gilmore’s understanding of how receivers release into specific routes helps, but his hip fluidity is also an elite trait that every top corner at this level needs.

As Gilmore’s play has continued to improve, the man himself said some of his success comes from an extra effort in the film room.

“Once they tell me our assignments, I just try to put myself in a position to watch it on film and see what I would do in a certain formation and just play the game in my head,” Gilmore told the Providence Journal’s Mark Daniels. “I watch every game. Sometimes if I don’t have enough film on this year, I even go back to last year. I see how they release off the ball, it’s the little things you have to look at, at corner, to try and get a certain step on guys.”

“He does his due diligence with his film study. He’s been very consistent since he’s been here. He’s put in a lot of good work for us. I think he studies schemes and opponents to the best of his ability. He does it week in and week out,” Boyer told me.

On the tape, you can find multiple examples of Adams using double-moves to beat corners for big plays as he did above against Rams Pro Bowler Marcus Peters.

Here, Adams runs an out-and-up at the bottom of the screen. Gilmore anticipates the route and nearly intercepts the pass. Although Adams prevents the interception, it’s clear that Gilmore sat on the double-move from the Packers wideout after seeing him run the route multiple times on film.

Gilmore has embraced the Patriot Way when it comes to dedicating himself to studying the game, and it’s paying huge dividends this season.

Although Gilmore hasn’t allowed many completions into his coverage this season (20), when opposing quarterbacks do manage to complete passes on him he’s spectacular at limiting yards after the catch.

On those 20 catches this season, Gilmore has only allowed a stellar 46 yards after the catch.

“A couple of the catches that he [Adams] made we tackled him pretty quickly after the catch out in the flat there,” said Belichick.

Gilmore allowed only nine yards after the catch to Adams, seven of which came on a screen pass.

On the screen, Gilmore does an excellent job of keeping his outside leverage, forcing Adams inside to his help, and then fights around the blocker to make the tackle himself. Adams has taken screen passes for long gains all year, but Gilmore was all over this one.

On this play, Gilmore is playing off-coverage in a pattern match technique in cover-3. Adams catches the pass in front of Gilmore, but the Pats corner closes quickly, whiffs on the first tackle attempt, but immediately regathers to bring down the Packers wideout on the second attempt.

Gilmore abilities as a tackler came into question at times last season, but he’s been terrific at getting receivers on the ground this year.

Finally, where Gilmore has shown the most improvement this season is in zone coverage.

Gilmore struggled in zone early on in his Patriots career, but with a better understanding of the scheme, he has turned into a solid zone player as well.

Let’s go back to the Patriots win over the Colts in Week 5 for this one.

The Patriots are in a cover-3 shell here with Gilmore at the bottom of the screen. He carries the vertical route in his zone with his eyes on the quarterback and his body positioned over the top of the receiver. Then, Gilmore reads Colts quarterback Andrew Luck’s eyes and jumps the underneath route for another near-interception.

Although Gilmore doesn’t finish the play, his feel in zone coverage has improved dramatically.

The Patriots defense made a statement on Sunday night against Aaron Rodgers and the Green Bay Packers.

The Pats held Rodgers to a season-low 259 passing yards, and New England’s coverage on Packers top wideout Davante Adams, led by Gilmore, was a significant reason for their success.

As a unit, the Patriots defense currently ranks 13th in Football Outsiders’ DVOA (Defense-Adjusted Value Over Average) metric, a far cry from where they were a season ago when they were second-to-last in the NFL in the stat.

Although there’s a long list of people that deserve credit for the turnaround, the advantages of having a shutdown cornerback on the perimeter cannot be overstated.

Gilmore is slowly starting to get the national attention he deserves, but to his coaches and teammates, he’s been everything they could’ve hoped for when the Patriots signed him in free agency.