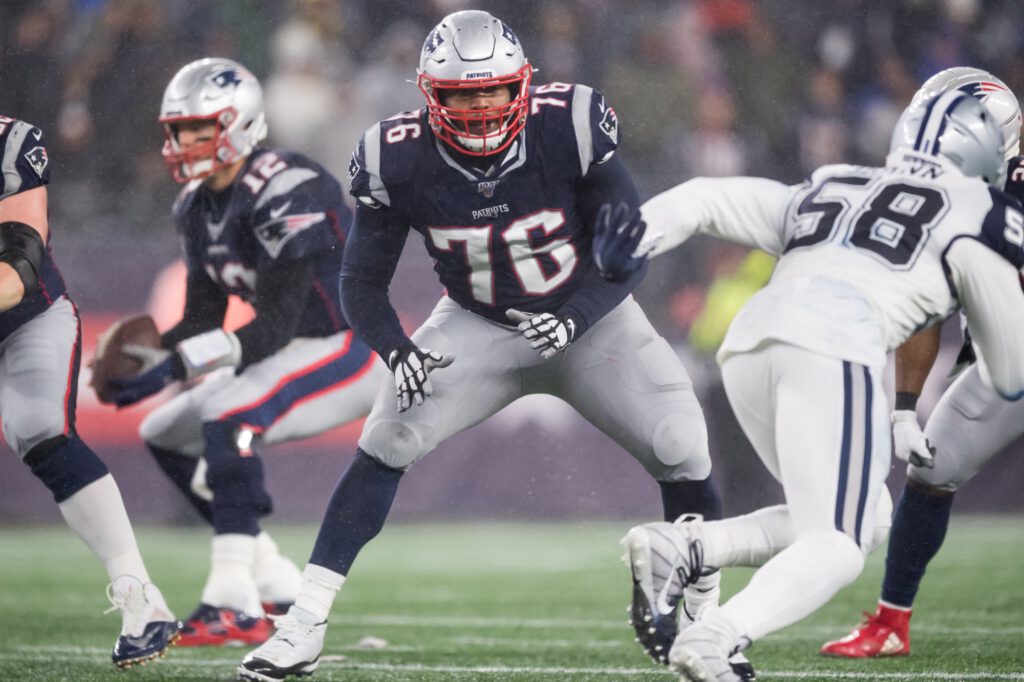 The Patriots only managed 13 points and 282 yards of offense in monsoon-like conditions at Gillette Stadium on Sunday.

Although it wasn’t a breakout performance filled with points and yards, the Pats planted a few seeds in the victory over Dallas that offer plenty of optimism about the future.

The most significant source of optimism came in the form of starting left tackle Isaiah Wynn.

Wynn returned to the lineup to play his first snaps since Week 2, and he brought with him a significant upgrade at left tackle that elevated the play of the entire offensive line.

Patriots quarterback Tom Brady was under pressure on only 28.2 percent of his drop-backs (best since Week 6), and the Pats rattled off a season-high five runs of ten or more yards.

And Wynn was at the center of it all, paving the way for fellow Bulldog Sony Michel on a few key runs and protecting Brady’s blindside well after finding his rhythm.

In the first quarter, Wynn struggled to stay in front of Cowboys pass rusher Robert Quinn, allowing three quarterback pressures on his first four pass-blocking snaps of the game.

After that, the Pats left tackle only allowed two hurries in his final 36 reps in pass protection.

The second-year pro explained to CLNS Media after Sunday’s victory that it took him a few tries to figure out Quinn’s pass-rush style, and the tape backs that up.

“Not the speed of the game, but just getting used to his type of rush. Every rusher is different, so just being able to get used to his rush, that was it,” Wynn said of his slow start on Sunday.

With Wynn being slightly undersized for the position, he takes an aggressive approach to pass protection so that his limited length doesn’t hurt him.

Unlike someone as large as Trent Brown or long as Nate Solder, Wynn wants to engage physically with rushers sooner rather than later.

However, against a speed rusher like Quinn, who is having a solid season for the Cowboys, that aggressive approach can get you into trouble when you don’t land that initial punch.

On Brady’s first drop-back of the game, Wynn gets caught lunging forward at Quinn, trying to get his hands on the veteran defensive end. Knowing Wynn would be aggressive, Quinn comes with a violent cross-chop move to keep the Pats left tackles’ hands off his chest. With his hands off Quinn’s body, the Cowboys defensive end turns the corner and lands a hit on Brady as he releases the ball. The hit didn’t cause Jakobi Meyers to drop the ball, but it was a lost rep for Wynn.

A few plays later, something similar happens to Wynn where he gets caught lunging against Quinn’s speed rush and cross chop. In pass protection, the goal for the tackles is to get the rusher ten yards past the quarterback. Then, it’s on the QB to step up into the pocket. Wynn almost recovers after whiffing on the punch again, but Quinn comes back around for the strip-sack. Wynn did okay pushing Quinn around the arc, but he couldn’t finish the block.

Once Wynn timed up Quinn’s speed, the Pats left tackle sat back a little more and used his feet to cut off the angle to the QB.

Here, Wynn is more aggressive with his footwork out of his set to slide over to Quinn to keep him from turning the corner, and he comes with his hands at the same time that Quinn tries to make his move. The better start for Wynn causes an initial stalemate, and Quinn can’t shake him laterally either because of Wynn’s terrific agility. Wynn delivers a dominant rep, and Brady has plenty of time in the pocket. Unfortunately, the result is the same as the first example, drop.

As the game progressed, Wynn’s adjustments to Quinn’s go-to moves started to creep into the Dallas pass rushers’ mind, so Wynn switched it up again. All good pass protectors keep the opponent off-balance by changing their approach down-to-down, and vice versa.

This time, the Pats go with a play-action pass, so Wynn uses an aggressive vertical set with a quick punch to get his hands locked on to Quinn instantly. Before his injury, Wynn’s hand placement and strength were one of his strongest attributes, and that’s on display again here. He grabs on to Quinn legally, and once he does, the Cowboys DE isn’t going anywhere.

Another impressive aspect of Wynn’s game as a pass protector is his ability to drop his anchor despite being on the smaller side for an offensive lineman in the NFL.

Wynn got a few reps against former Patriot Michael Bennett as well, and on this play, Bennett tries to bull rush him. As Bennett tries to run through his chest, Wynn holds against the initial burst, and then resets his hands and uses upper-body torque to turn Bennett away. In the trenches, leverage, and therefore power, is always created by hand placement and pad level. Wynn put on a clinic on how to turn the tables on a bull-rusher.

In this first example, the Cowboys ran a simple T/E stunt with Bennett and Quinn. As Bennett wraps around Quinn, Wynn has the lateral quickness to take over Bennett and slide to his left to keep Brady clean.

Later on, Wynn quickly sniffs out another stunt to stop the defensive tackle in his tracks. Wynn sees Quinn slant inside at the snap, and immediately knows it’s another T/E stunt and gets his hands on Cowboys nose tackle Maliek Collins.

Due to his struggles in the first quarter, Wynn received a 56.9 out of 100 pass-blocking grade on Sunday. But if you remove the opening frame, Wynn’s grade increases to 79.7.

And where Wynn really shined was as a run blocker, where his game-grade was a much better 78.1 out of 100.

The Pats ran behind their left tackle eight times with Michel averaging 4.9 yards per rush on those attempts.

Let’s start with a few shorter runs and make our way up to the big highlight of the day for Wynn.

On this six-yard gain, the Pats ran an outside zone scheme to Wynn’s side. You can tell it’s outside zone because the linemen step towards the sideline rather than coming off the ball at a 45-degree angle on inside zone. Wynn’s block is a simple kick-out of the end, but he gets such great explosiveness out of his stance and has a fantastic approach to the block, creating leverage and driving Quinn out of the hole. There’s no way that Marshall Newhouse makes that block look so easy.

Here, on another positive run, the Pats ran their outside zone lead scheme, which will come back up again shortly. Wynn executes a combination block perfectly with Joe Thuney, bumping the end and then climbing to the linebacker at the second level. Michel follows right behind him for another five yards.

Finally, the block on Michel’s 12-yard run that essentially iced the game was a beauty. The Pats have the same lead zone play on, which they call “boss” in their terminology. This time, the defensive end stays outside, so Wynn combo blocks with Watson rather than Thuney. As he rides the double team, Wynn sees Cowboys linebacker Sean Lee unblocked at the second level, slipping through the line to blow up the play. Wynn comes off the double and gets enough of Lee to keep Michel rolling. That’s both terrific awareness to see Lee and foot speed to fit on to the block.

Wynn’s struggles early on didn’t go unnoticed by him or his coaches, but he rounded into form after a long layoff to close the game strong, and it’s a night-and-day difference between him and Newhouse.

“I thought he did some really good things and then did some things where we’ll look forward to improving this week,” Patriots offensive coordinator Josh McDaniels said on Tuesday. “He knew it right away – we talked since the game and there’s an eagerness now to try to improve on the things that he saw and felt that he didn’t do as well as he wanted to.”

In all due respect to Newhouse, who gave the Pats everything he had, Wynn is a far superior talent that’s working with athleticism that is far beyond anything Newhouse possesses.

Wynn gives the Patriots speed and foot quickness at left tackle, a premier position, allowing them to run to his side with urgency while he also protects Brady’s blindside at a high level.

Plus, for a second-year player that hasn’t seen the field much, Wynn’s footwork and hand technique are as good as any young tackle in the league. He’s an absolute technician, which, along with his athleticism, makes up for any disadvantages he has due to his size.

Based on two full regular-season games, two training camps, and playing college ball in the SEC, I can confidently conclude that Isaiah Wynn is the real deal.

The question now for him is the only question that matters, can he stay on the field?

OTHER FILM NOTES FROM SUNDAY

After watching the coaches film, there were a couple of more opportunities to target Harry, but none of them were egregious misses by Brady. The rookie dropped two passes in inclement weather, which hurt his stat line, and the Pats coaching staff is still figuring out ways to get him the ball in space where he can use his YAC skills.

One of the non-egregious decisions by Brady came on a sack in the third quarter. Harry is running a drag route against man coverage, and he’s certainly not running away from the defender. However, there’s enough room there to get him the ball, and with his size and shiftiness, it’s not out of the question that he could throw a stiff arm and take off running. Harry’s college tape is littered with plays where he creates after the catch by out-muscling tackle attempts, so it would be nice to see the Pats and Brady give him a chance to do that.

On a positive note, Harry is going to be a factor in the red zone, moving forward. His approach to the back-shoulder TD was what you want to see. He pointed his hips up the field and got on to the toes of Byron Jones, rather than shuffling sideways as some receivers do. By squaring up Jones, he creates that box-out positioning to shield the Cowboys cornerback from the ball at the catch point.

Now that the back-shoulder fade in the red zone is on tape, Harry can set up an inside counter like a slant or go straight over the top on a go ball.

Although his receptions and yards might not be off the charts, if Harry can help the Pats finish drives, like Gronk in his rookie season, that’ll go a long way for this offense.

This season, and even more so over the last two games, the Patriots are playing a noticeably higher rate of two-deep coverages, rather than single-high or post safety structures.

In 2019, the Pats are in either cover-2 zone or two-man on 21 percent of their defensive passing plays, which is more than double their output a year ago (nine percent). Now it’s heavy on situations, as the Pats continuously get teams into second and third and long where the coverage makes more sense, but that’s still a drastic increase.

Here they are playing two-man on third and long. They usually rotate into it late. pic.twitter.com/ixmqw2G0k7

Here’s a twitter thread that breaks down the two most common types of split-safety looks.

Turn the sound on and listen to my explanation on how the Patriots are shutting down pass-catching running backs over the last two weeks.