Film Review: Patriots New-Look Pass Rush is Getting After the Quarterback 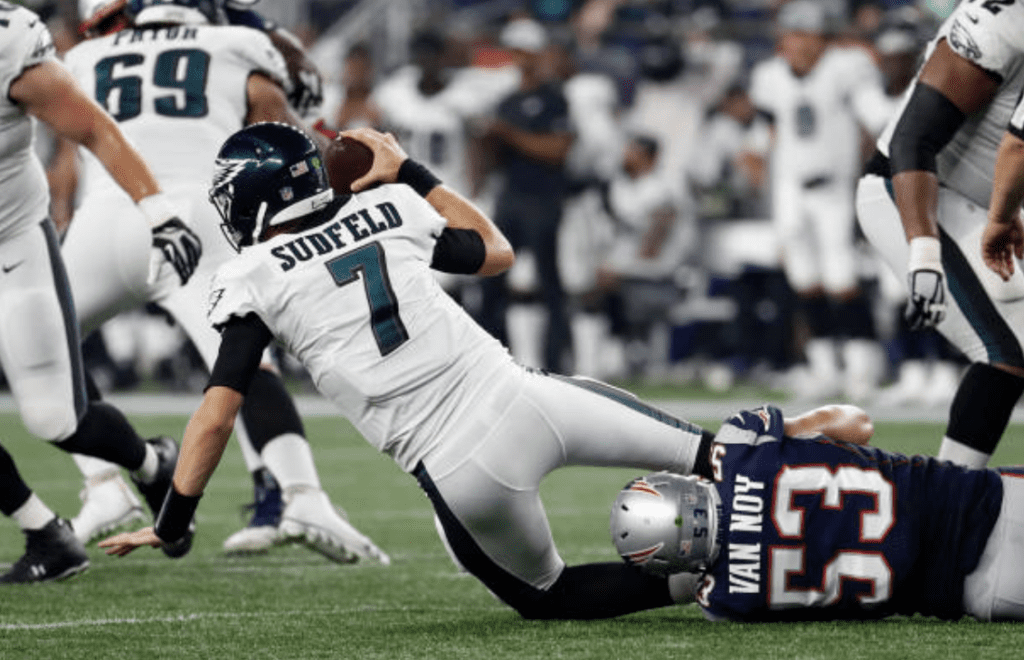 As the Patriots continue to prepare for the 2018 regular season, there are some noticeable differences with their approach on defense.

New play-caller Brian Flores has the Patriots defense playing fast and aggressive, and although it’s only the preseason, its working.

Last season, the Patriots were one of the worst teams in the NFL when it came to pressuring the quarterback. They ranked 25th in the NFL in overall pressure percentage (32 percent) and 31st in Pro Football Focus’ “quick” pressure stat (17 percent, pressure in 2.5 secs or less).

However, through two preseason games, the Patriots have pressured the opposing quarterback 50 percent of the time and have generated “quick” pressure on 38 percent of opposing teams drop-backs, both tops in the league during the preseason.

Furthermore, the Patriots have turned up the heat on opposing quarterbacks in August.

Although we have to remain cautious of overreacting before the games start to count, a combination of added talent in the front seven and more aggressive play calling has led to a much better Patriots pass rush in the early going.

Below, I’ll take you through the film to explain how the Patriots and Brian Flores harrassed the Eagles quarterbacks last Thursday night.

The Patriots selected Derek Rivers 83rd overall in the 2017 NFL Draft after the Youngstown State star lit up the NFL Combine in Indianapolis.

Unfortunately, Rivers missed his entire rookie season after tearing his ACL in a drill at training camp, an unlucky break for the young pass rusher.

Fast forward a year, and Rivers is now healthy, and after struggling a bit in his first game action since the injury against Washington, Rivers racked a team-high eight pressures with a sack and seven quarterback hurries against the Eagles.

On his second-quarter sack on Thursday night, Rivers flashed the physical traits that we already knew existed and added some nuance that we haven’t seen at the NFL level, albeit in limited action.

Rivers’ go-to pass rush move is the bull rush. He has exceptional burst off the ball and good enough power to finish. Rivers spent most of the first quarter using speed to power moves rushing the quarterback on the edge. But on the sack, Rivers is going to use all those prior reps to his advantage against Eagles backup right tackle Taylor Hart.

Rivers comes off the ball and immediately engages Hart with a strong two-hand punch, the same setup he uses for his bull rush. But instead of continuing with the power move, Rivers pulls Hart towards him, a counter to his speed to power rush, and finishes by bending around the tackle before bringing down the quarterback. Rivers’ ability to bend and shrink the distance between himself and the quarterback as he comes off the edge is an elite trait that most great pass rushers have, and a sack like this one should make Patriots fans very excited about Rivers’ future.

The other new contributor to the Patriots’ pass rush is 2011 first-round pick, Adrian Clayborn.

Clayborn signed a two-year, $12 million deal with the Pats in free agency after a career-high 9.5 sacks with Atlanta last season.

Clayborn was advertised as a bull rusher that would come in and push the pocket, but with the Patriots he has flashed a deep arsenal of pass rush moves, and his strip-sack against the Eagles is a great example.

Knowing Clayborn is a powerful man, Eagles starting left tackle Halapoulivaati Vaitai is going to aggressively jump forward on his pass set looking to surprise Clayborn. But the Pats’ new defensive end goes to a stutter-step move instead of his bull rush, which gets him on the toes of Vaitai, limiting the big tackles’ ability to punch and extend his arms on his block. That gives Clayborn the leverage win, and then he swipes down on Vaitai’s hands to disengage before bending around the edge and delivering a blow to Nick Foles’ throwing arm causing him to fumble the football.

Clayborn’s bull rush may be his best pass rush move, but he has plenty of counters that build off of his speed and power.

New defensive play-caller Brian Flores has experimented with a number of different blitz packages, and so far, they’ve been highly successful.

Many of the blitz designs from the Pats on Thursday night involved safety Patrick Chung, but the defensive line has been key to their success as well.

For example, Kyle Van Noy’s second-quarter sack on third down was one of the better blitz designs we’ve seen from Flores.

For starters, the Patriots have a great set up pre-snap. They’re in their base nickel defense and a 3-3 front that operates nowadays like a 3-4, with Derek Rivers and Chung serving as outside linebackers on the play. And the threat of Rivers and Adrian Clayborn on the same side of the formation (at the top of the screen) is going to be a nightmare to block for opposing offenses.

However, the key on this play is going to be Deatrich Wise playing as a four-technique defensive end over the right tackle.

Wise is going to immediately jump inside on the guard on the snap, which puts the whole play in motion. Wise’s rush leaves the right tackle in a position where he has to look for work without a rusher immediately engaging him. The Eagles right tackle should know he has help from the running back to pick up Chung, but he gets caught in no man’s land. Wise’s rush also creates a lane for Van Noy to squeak through the middle of the line on the inside blitz. With the right guard occupied with Wise and Hart’s indecisiveness, Van Noy has a free run to the quarterback for the sack.

This is an aggressive play call with a lot of pass-rush talent along the defensive front, and the whole Eagles offensive line caves in with multiple Patriots beating their man.

Safety Patrick Chung was involved in the last sack adding an extra body to the pass rush, but here he’s going to get a sack of his own.

Chung lines up at cornerback on the weak side of the formation but ends up coming after the quarterback on a corner blitz. The Patriots also send Kyle Van Noy on a blitz, but Van Noy executes a twist with Deatrich Wise, which occupies the right side of the Eagles’ offensive line. That leaves Chung to rush on running back Jay Ajayi, a matchup the Patriots will take every time. Chung bowls over Ajayi and takes down Foles.

Last season, the Patriots blitz schemes typically sent their middle linebackers from off the line of scrimmage and rushed them directly into the interior of the offensive line.

The wrinkle of Van Noy blitzing from on the line of scrimmage and twisting around Wise isn’t necessarily something they haven’t done in the past, but if they do it with more frequency this season, it could be a massive development for the pass rush.

Also, at the bottom of the screen, Clayborn and Rivers once again rush from the same side of the formation, and their penetration causes Foles to step up into Chung.

Although it’s important not to overreact to the preseason, the influx of talent in the Patriots’ front seven combined with Brian Flores’ play calling has led to some intriguing developments for the Patriots’ pass rush.

Opposing teams will be ready come the regular season with schemes and game-planning of their own to match what the Patriots are doing up front.

But the Patriots haven’t reinvented the wheel here.

There’s just more talent in the front seven compared to last season, and Flores has gotten off to a hot start with his play calling in the preseason.

We’ve seen how well the Patriots have faired in the preseason with the additions of Adrian Clayborn and Derek Rivers, and they’ve done it without stalwarts Trey Flowers and Dont’a Hightower.

Flores’ hot start will have to continue into the regular season for the Patriots to keep this up, and they’ll need to stay healthy of course, but there’s reason to be excited about what we’re seeing from the defense.