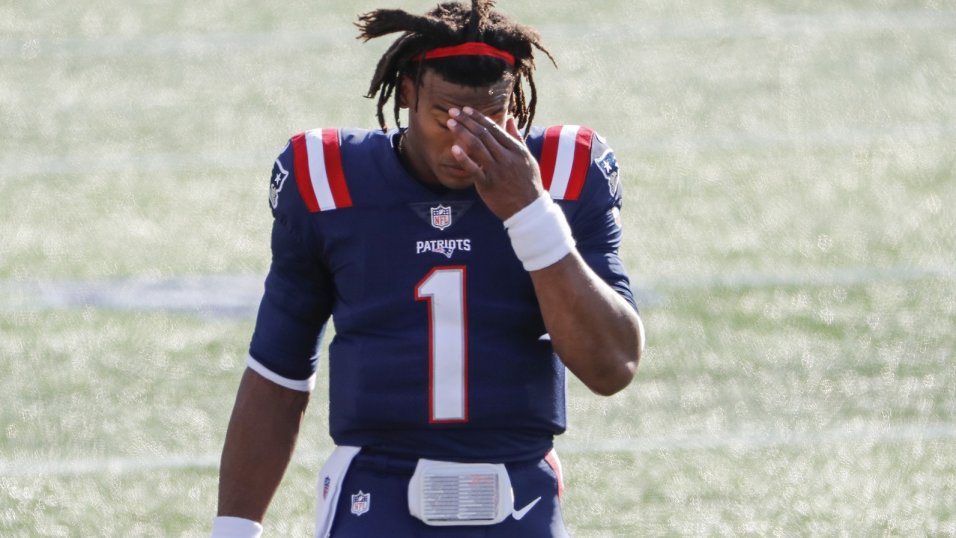 The knee-jerk reaction for those that watched the Patriots’ offensive performance in Sunday’s loss to the Broncos was to blame New England’s lackluster receiving corps.

On paper, the Patriots have one of the most underwhelming groups of wide receivers and tight ends; if we were power-ranking the league’s weapons, the Pats would be towards the bottom.

The numbers also suggest that Cam Newton’s pass-catchers aren’t bringing much to the table.

According to Pro Football Focus, the Pats are 23rd in contested catch rate, and 16th in forced missed tackle rate after the catch.

Furthermore, Newton’s splits by coverage (man or zone) type are also glaring. Based on the metrics, the Pats don’t have any receivers that can win consistently against man coverage.

However, New England’s struggles offensively against Denver had nothing to do with talent amongst their skill players. Sure, they could definitely upgrade there, but it wasn’t the driving force.

Instead, it had more to do with Newton’s struggles and a battered offensive line that allowed a season-high 43.8 pressure rate in the loss to the Broncos on Sunday.

There’s no doubt that Newton was impacted on several occasions by pressure. Either throwing with defenders in his face, reacting to hands in passing lanes or just uncertainty behind his line.

After the loss, Newton also spoke of a lack of “anticipation” and “timing” with his receivers due to almost non-existent practice time for the quarterback over the last three weeks.

Although practicing would undoubtedly improve execution, the reality is, because they aren’t creating tons of opportunities with their receivers, Newton needs to be better, much better.

There are a handful of plays in last week’s game where there were open receivers, and Newton either made a poor throw or was too late to pull the trigger (practice would help, we know).

Plus, after the long layoff, Newton’s throwing mechanics were an absolute mess, and we saw him revert to old bad habits that the Patriots coaches have worked diligently to correct.

New England cannot afford to miss as many open throws as Newton did; when the opportunities are there, they need to cash in because who knows how many chances they’ll have?

The Patriots roster is talent deficient at wide receiver and tight end. There’s no denying that, so Cam needs to be Superman for the offense to produce, fair or not.

The difference in any NFL game could come down to 4-5 misses by the QB, as it did this week.

Let’s start with a throw towards the end of the game and then work our way backward.

The Broncos played a majority of the game defensively in off-coverage, off-man, cover-three, or cover-six. The Pats responded by running their outside receivers on deep curls and comebacks.

After setting it up all game, Josh McDaniels dialed up something he doesn’t normally do, calling a stutter-and-go double-move at the bottom of the screen to Byrd with 2:36 remaining in the game. In fact, it was only the second time all season that the Pats targeted one of their receivers on a double move. Yes, Edelman is open for an easier completion over the middle, but again, the Pats were setting up a deep shot to Byrd the entire game; time to take a shot.

As the all-22 angle shows, Byrd sells the route nicely and is beating Broncos corner Michael Ojemudia over the top. If Newton leads Byrd into the end zone, it’s six. However, as the audio breakdown explains, Newton “breaks the mechanical chain,” causing the ball to land well short. If Cam steps towards his target, transfers his weight from back foot to front foot, and allows his hips to open naturally, he’ll get the ball where it needs to go.

Imagine the frustration on the Pats’ sideline after waiting all game to take a shot, and getting a wide-open receiver, just to see Newton’s bad habits reappear after not practicing for weeks.

The good news is that a return to practice should correct some of his footwork issues, but it’s also who Newton is as a thrower, and that’s tough to fix after all these years.

Hopefully, quarterbacks coach Jedd Fisch can improve Newton’s footwork as he did earlier in the season to allow the Pats quarterback to generate some velocity from his lower half.

Along with poor footwork on several throws, Newton, who is usually one of the most aggressive passers in the league, was gun-shy against the Broncos.

As is the case with all quarterbacks, if the timing with your receivers is off, the offense misses its window of opportunity to hit certain openings even if they’re off by half a second.

Here, the Patriots are running a “sail” concept out of a 3×1 formation. The idea is for the offense to high-low the flat defender with a corner route (Edelman) and flat release (Asiasi), creating a two-on-one in the boundary for the offense.

The Broncos drop into a cover-three zone, and the flat defender over the slot plays a poor “sail” technique. With Damiere Byrd clearing out the sideline, it’s on the flat defender to squeeze Edelman’s corner route and force a throw underneath the defense. However, the flat defender locks onto Asiasi’s route, while Byrd occupies the deep defenders, leaving Edelman wide open. Cam should hit that no problem as Edelman comes out of his break. Instead, he holds it and ends up scrambling for a two-yard gain after it’s too late to pull the trigger.

That’s a passing window that a fully-functioning Cam Newton hits in his sleep.

Next, McDaniels created another opportunity for Byrd by using a stack alignment to get the speedster advantageous leverage.

A glance route, or a skinny post, breaks after five steps while a slant is a three-step route.

As Edelman motions into the stack, the Broncos anticipate he’ll cross over the middle as he usually does, but he runs a speed out instead to open the middle of the field for Byrd. It’s a nice tendency breaker by McDaniels. Denver locks the point-man in the stack onto Edelman to cut off the inside, which puts the outside corner in a bad position to cover Byrd; he’s out-leveraged immediately with Byrd’s inside positioning. The deep safety on that side of the field opens to the boundary, and Byrd might score if Newton hits him in-stride as he’s coming out of his break. Unfortunately, by the time Newton loads up, there’s a defender in the passing lane at the line of scrimmage and Justin Simmons, who’s there to cut crossing routes, reads Cam’s eyes to fall underneath Byrd.

Another example of Newton holding the ball too long instead of throwing to an open receiver costing the Patriots a chance at points.

Here’s a miss that speaks to multiple issues that we saw with Newton last week, and even in his tape against the Raiders back on Sept. 27.

The Pats run their “knife” concept, sending Edelman on a middle-read route with a deep dig pattern filling underneath as Cam’s second read in the progression. As New England always does, they then give Cam a check-down in the right flat if neither downfield target is open.

Edelman is reading the safeties. If it’s single-high, he’ll run a crosser. If it’s two-high, as it is in this example, Edelman splits the deep safeties down the middle.

The defense is in a cover-six structure, with the right side of the field in cover-two and the left side in cover-four. I discussed cover-six in my weekly game plan column, a Fangio favorite, and a coverage that shouldn’t surprise Newton after watching Fangio all week.

But the Broncos threw a wrinkle at Cam. Instead of cover-four to the passing strength and cover-two to the weak side, they flipped it. Asiasi’s release into the flat should give Cam the check-down he wants against cover-four, but the boundary corner plays a cover-two technique, and I think that screwed up Cam’s progression.

Edelman splits the two-high safeties correctly, and he’s open for a shot if Cam wants it, but he’s reluctant to pull the trigger once again. Although there’s space for Asias in the right flat, Cam works the cover-four side on a comeback to Byrd because of the squatting corner, which is well covered, and then takes off and is tackled short of the sticks. Who knows? Maybe Edelman makes a big play, or Asiasi makes a defender miss in the flat to pick up the first down. Fangio got him on that one.

There are a few more examples of Newton choosing to ignore open check-downs in the flats, but this should give you an idea of his processing struggles on Sunday.

The Pats don’t have the luxury of skill position players who can consistently create big plays, but their current group of wideouts execute the scheme and get open within the structure.

New England needs Newton, who is capable, to also keep the offense on time and function well in the system so that the scheme can work properly. It won’t work if the QB is late to his throws.

The Patriots run a timing offense that will naturally create opportunities for completions with alignment and route combinations, but the quarterback’s rhythm makes the whole thing tick.

Hopefully, a full week of practice will get everyone back in-sync. But for now, stop falling for the low-hanging fruit by blaming the receivers; Newton needs to be better.