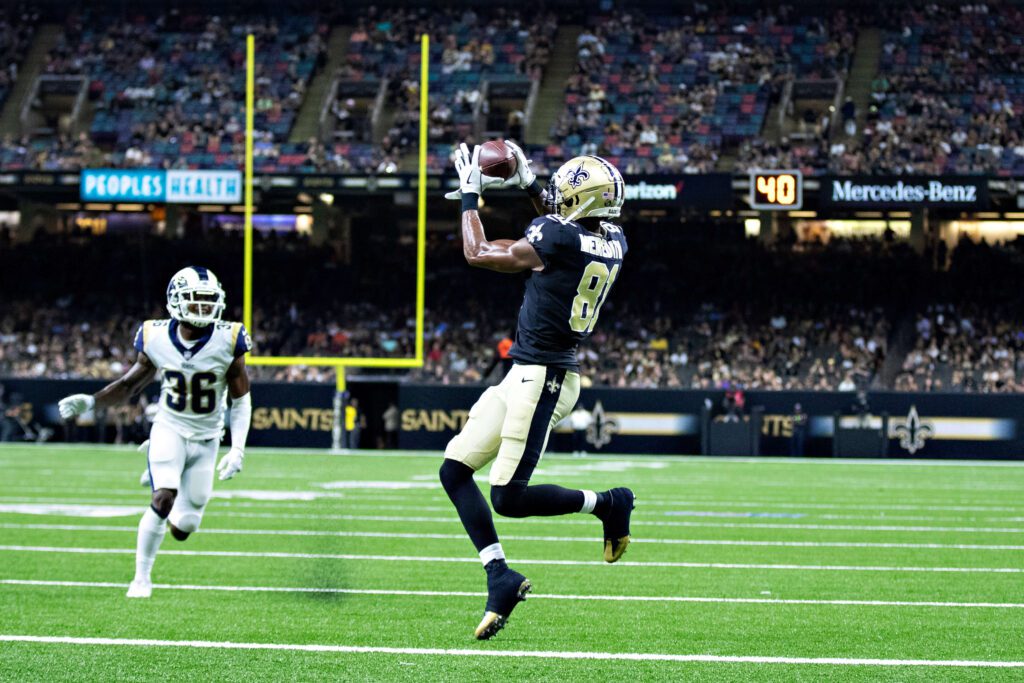 FOXBOROUGH — the Patriots made another low-risk addition to their wide receiver corps signing former Bears and Saints wideout Cameron Meredith on Friday.

The Saints released Meredith last week after he played in six games for New Orleans in 2018.

Meredith broke out with 66 catches for 888 yards and four touchdowns for the Bears in 2016. But a severe ACL tear that occurred during the 2017 preseason derailed his career.

And that ailing knee will cause Meredith to stay back for treatment while the Patriots are in Detroit next week.

The six-foot-three Meredith continues a trend towards bigger wide receiver for the Patriots and has some versatility to play inside or outside.

In 2016, Meredith ran 52.1 percent of his routes out of the slot with nearly 50 percent of his production coming from inside, according to Pro Football Focus (33 catches, 409 yards).

If Meredith is healthy, and that’s a big if, he has the skill set to stick with the Patriots.

Here’s a quick film-based primer on what Meredith brings to the Pats:

Here, Meredith is matched up with Lions Pro Bowler Darius Slay. Meredith starts by faking an inside release eventually attacking Slay’s outside shoulder. Once he gets to the top of his route, Meredith peaks back inside which gets Slay thinking its an in-breaking route. Slay commits inside, and Meredith gets vertical and uses an arm over move to clear his body to run away from Slay for the touchdown.

In the 2018 preseason, Meredith hauled in a 50-yard bomb with a terrific double move.

The corner is in off-coverage against Meredith, so he takes three hard strides to close down the space between him and his man. Then, he fires his feet and peaks to the inside like he’s about to break off his route. The corner bites and Meredith is wide open down the sideline.

Lastly, as mentioned above, Meredith can effectively run routes out of the slot as well.

On this reception, Meredith runs a filthy route against veteran defensive back Captain Munnerlyn. Meredith runs an inside stem to get Munnerlyn to open his hips to the field. Once Munnerlyn opens his gate, Meredith sneaks into his blind spot, causing Munnerlyn to lose sight of him at the top of the route. Meredith adds a rocker step to fake an inside break then breaks outside creating tons of separation. To cap it off, he shows off his catch radius by leaving his feet and extending above his head to grab a high throw. That’s clinical route running.

The odds are that Meredith’s knee won’t allow him to return to his peak form in 2016.

But he’s worth a flier as the Patriots search for playmakers on the perimeter.