Film Review: Regardless of Where You Have Him Ranked, Julian Edelman is Damn Good 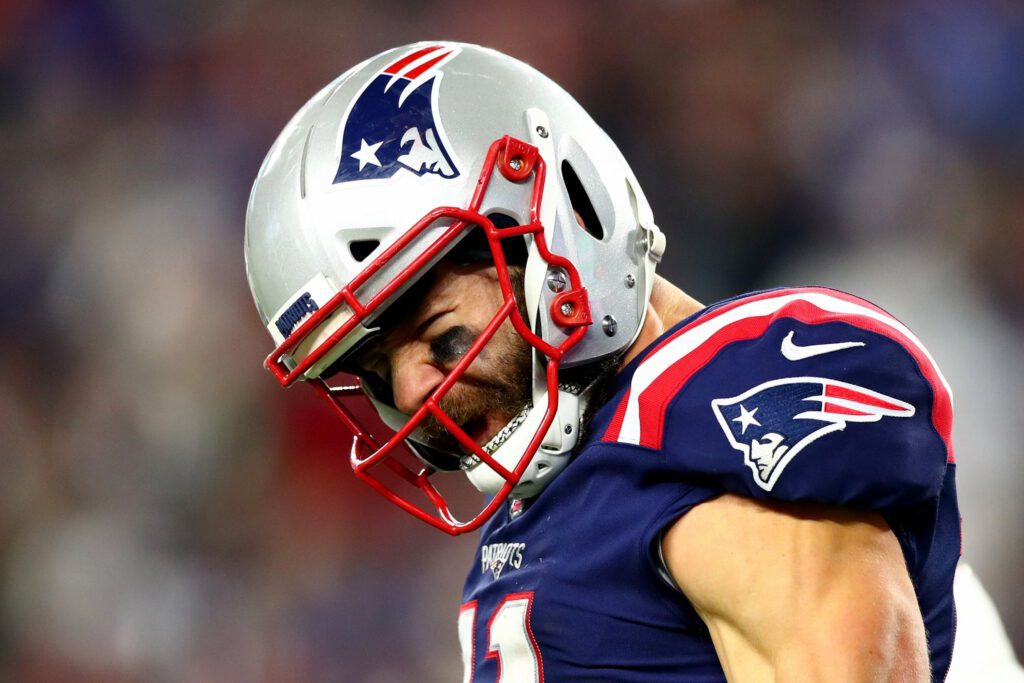 Where does Patriots wide receiver Julian Edelman rank among players at his position?

The conversation began on twitter last week and prompted a question to Tom Brady on his weekly appearance on WEEI about his favorite wideouts place in the NFL wide receiver hierarchy.

No disrespect to people that do them, but rankings aren’t my thing. I also think rankings are tough, particularly receivers since there are so many skill sets. There are outside guys, inside guys, vertical threats, jitterbugs, guys that are great after the catch, and so on. It’s a difficult position to rank.

But I agree with the quarterback who called the criticism “bogus” in his defense of the reigning Super Bowl MVP.

Over the last two games, during a period where the Patriots offense has struggled, Edelman’s level of play hasn’t dipped despite seeing extra attention.

In those two games, Brady has completed nearly 71 percent of his passes to Edelman, and if you take out a bad pick by the QB, his passer rating on those throws was 113.7. Edelman is also responsible for a third of New England’s first downs through the air.

Yes, it was against the Redskins and Giants, but Edelman is helping carry an offense that’s still averaging nearly 26 points per game, and his value to the team has never been higher.

Here are a few recent Edelman’s catches that show what makes him so difficult to defend:

Let’s start with the longest play from scrimmage for the Patriots last Thursday night. Edelman is in tight to the formation. He charges hard off the line and positions himself to split a double team by the Giants secondary, keeping his pads down to sell a vertical release. At the top of the route, he sinks his hips and fires his feet to sell a break. The fake causes both Giants defensive backs to freeze, and Edelman converts it into a stutter-and-go to get behind the defense.

Although Edelman can get over the top, his strength will always be on routes over the middle. He’s a complete route runner out of the slot with great releases, setups into his breaks, moves at the top of the route, and physicality.

First, we’ll highlight Edelman’s releases. On this play, Edelman wants to attack inside leverage, so he takes an outside hesitation step to get Norman leaning that direction and then releases upfield to the inside. Before he cuts the route off, Edelman takes the extra steps to stack Norman at the top, which prevents the Redskins CB to undercut the route. Edelman breaks it off, draws a hold, and makes a diving catch.

Here’s another catch on a route that put Norman in a blender. Norman is in off coverage, giving Edelman a free release, and opening to the sideline. Edelman angles his route to the outside and then sneaks into Norman’s blindspot underneath him. At this point, Norman’s eyes are no longer on the receiver, and Edelman cuts back outside to make the toe-tapping grab.

Finally, what might stand out the most about Edelman as a route runner is his physicality. He’ll be the aggressor, get his hands on cornerbacks, and is fearless over the middle.

This time, Edelman comes in short motion to get an easier release at the line of scrimmage. He knows that Redskins cornerback Quinton Dunbar is going to try to jam him as he tries to cut across on the angle route. Edelman fights fire with fire, shoving Dunbar off of him before running away from him for a 31-yard gain.

As Brady said, the Patriots put Edelman in difficult positions and run a lot of their passing offense through him.

Where is he among the lexicon of NFL wide receivers? Some people will never allow themselves to be convinced. He’s darn good, that’s for sure.

Here are a few other quick-hit thoughts after reviewing the coaches film:

1. Why Do Quarterbacks Keep Throwing at Stephon Gilmore?

Over the last two seasons, you’d think Stephon Gilmore’s reputation would keep opposing quarterbacks from throwing his direction. Giants rookie Daniel Jones didn’t read the scouting report and targeted Gilmore a team-high eight times. On those eight attempts, he threw six incompletions, two interceptions, and Gilmore broke up four passes. Jones’s passer rating on throws into Gilmore’s coverage was 1.6. Below is an audio breakdown of how Gilmore baited Jones into his third interception of the game. Later this week, I’ll have an extensive feature on Gilmore as well.

2. Michael Bennett is No Longer a Scheme Fit

Bennett’s disagreement over his role with defensive line coach Brett Bielema that led to a one-week suspension for the veteran was not surprising. Bennett, a three-time Pro Bowler, was understandably frustrated with his lack of playing time after he played 11 total snaps, eight in garbage time, on Thursday night. Unfortunately for Bennett, an influx of talent at linebacker led the Patriots away from his expected role in the defense.

The Patriots play two primary fronts. The first, shown here, is a standard 3-4 defense. Sometimes, the Patriots will put a linebacker as a standup five-technique, and often they’re in nickel with a Chung or Terrence Brooks as money-backers. Bennett isn’t a two-gapping defensive end. He’s a 4-3 end that likes to shoot gaps. In a 3-4 front, the Patriots are going with stouter options that can two-gap against the run inside.

The other front they’ll use is a four-man EX front that features only two down linemen, typically run-stuffing defensive tackles. Similarly to the 3-4, Bennett isn’t going to hold up inside and isn’t a standup outside linebacker.

Bennett’s ideal role is as a 4-3 defensive end or inside pass rusher. But the Patriots are rolling with the linebackers on the edge, leaving the need for more size on the interior.

Over the weekend, I had my friend Louie Benjamin at Pro Football Focus help me put Marshall Newhouses’s play in context, mainly as a pass rusher. There’s no doubt that he has athletic limitations that lead to some ugly losses, but just how bad has it been? Since Week 2, Newhouse’s loss rate in pass protection is 11.2 percent. For comparison, Cowboys All-Pro left tackle Tyronn Smith loses on 7.5 percent of his pass blocks. So Newhouse isn’t doing well, but I also don’t think he’s getting beat as often as people think. Typically, it’s been a few really bad plays. In fairness to Newhouse, he’s in a difficult situation. The team is asking a lot of him playing him on the left side.

The sack he allowed on Thursday night was a great example of where his issues are in pass protection. He got caught leaning the wrong way with the outside rusher slanting inside at the snap. Once he loses leverage, Newhouse doesn’t have the change of direction or foot quickness to recover, so it’s over quickly.

Like several Patriots, Newhouse’s struggles as a run blocker is a far bigger issue. He has a respectable 69.3 pass-blocking grade but a 48.4 run-blocking grade (out of 100). He is quite a steep dropoff from Isaiah Wynn.

Over the last two weeks, Meyers, mostly out of necessity, played 91 snaps finishing out the win on Thursday night alongside Julian Edelman and fellow rookie Gunner Olszewski. After reviewing the coaches film, I can confidently say that Brady isn’t ignoring Meyers. Meyers is getting the targets he should when he’s in the primary read of the progression or creates separation, and he’s making some plays.

On his second 23-yard reception, Meyers is Brady’s second option off of play-action. Brady’s first read is to Edelman on an out pattern along the right sideline. Edelman isn’t open, so Brady works to Meyers on the crosser.

On the route itself, Meyers squares up the cornerback in his stem and gives a little shoulder shake to get inside of the defender. Once he has positioning, he gets past the defender and holds the angle across the field. At the catch point, Meyers attacks the ball and lifts it up and away from the defender to finish the catch. That’s a professional play by the rookie.

We’ll see if Meyers can continue to build on Thursday night’s success.