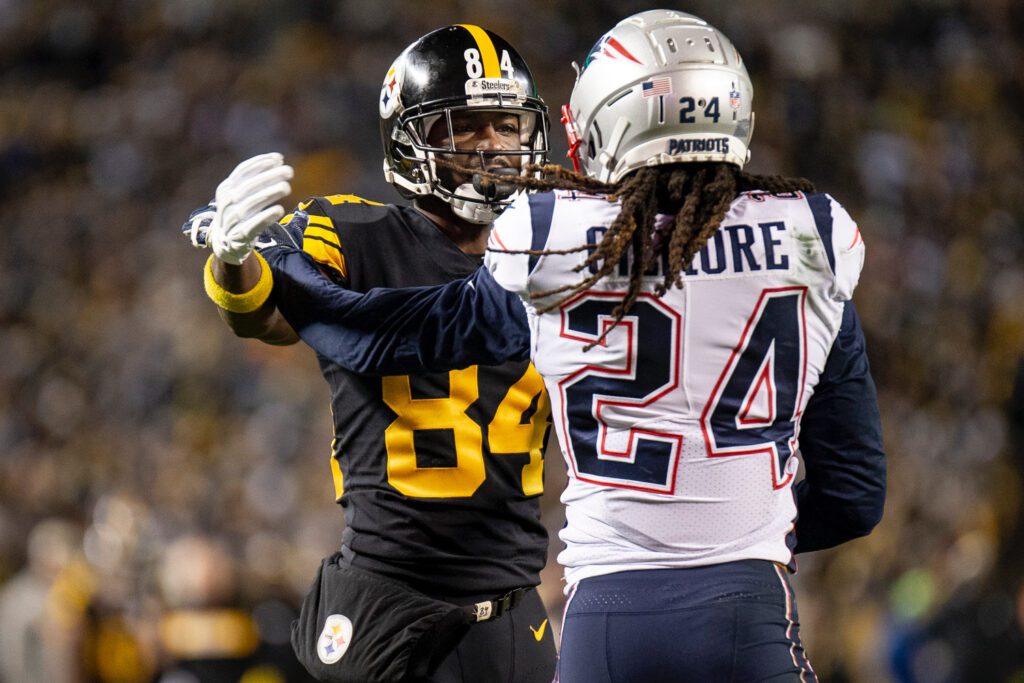 FOXBOROUGH — There weren’t a lot of positive takeaways from the Patriots’ uncharacteristic defeat to the Pittsburgh Steelers on Sunday.

The Patriots hadn’t lost a game to Big Ben and company since 2011, and the New England offense looked lost against a defense that Tom Brady notoriously dominates.

However, if you want a silver lining, the Pats defense, led by their secondary, only allowed 17 points and 235 yards through the air (6.9 YPA) to a Pittsburgh passing attack that’s seventh in Football Outsiders’ DVOA rankings.

Furthermore, the Patriots leaned on top cornerback Stephon Gilmore and rookie JC Jackson to play man coverage against one of the best wide receiver duos in the NFL in Antonio Brown and JuJu Smith-Schuster, and the pairing combined for only 89 yards on 17 targets.

For Gilmore, his performance against Brown solidifies his standing as one of the league’s best corners deserving of All-Pro consideration.

And for Jackson, the rookies’ ascension from undrafted free agent to a top three cornerback tasked with covering one of the league’s premier wideouts is a welcomed sight for a team that lacks young talent on the defensive side of the ball.

As head coach Bill Belichick told me, Jackson continues to get better each week, and that’s apparent when you turn on the tape.

“I’d say it’s been steady. It wasn’t like it all happened in one day or one week,” Belichick said. “He’s just played a little better each time he goes out on the field, takes advantage of his opportunities and just continues to get a little bit better.”

Below, we’ll go through the film from Sunday to explain why Patriots fans can take some solace in the performance of the secondary in what was a painful loss:

Early on in the game, the Patriots defense forced a punt with two sacks in a three-play sequence.

On the second sack, which came on third down, they had terrific coverage in the secondary. Gilmore has Brown in man coverage at the top of the screen while Jackson is tracking Smith-Schuster in the left slot. What makes this coverage great is how the Patriots’ corners use their safety help to make things easier on themselves. The Pats have a post safety in the middle of the field and rotate Devin McCourty down into a “robber” position at the snap. Knowing this, Gilmore plays Brown with outside leverage opening his hips toward the field and carrying Brown vertically on his outside hip. If Brown runs a post, Gilmore knows the post safety will provide inside help. In the slot, Jackson plays underneath Smith-Schuster knowing he has the safety over the top and on his outside hip funneling him towards the safeties in the middle of the field. Chung and McCourty pass of tight end Vance McDonald, and Chung works back to Smith-Schuster to provide support to Jackson. Roethlisberger’s first read takes him to Smith-Schuster, but he’s covered tightly by Jackson, and the pass rush closes to sack the Steelers quarterback.

Both of Roethlisberger’s interceptions came on great plays from Jackson and Gilmore.

On Duron Harmon’s first interception, Jackson is in coverage against Smith-Schuster out of the right slot. Once again, Jackson knows he has Harmon behind him, so he plays a hi-low coverage by running underneath Smith-Schuster’s route taking away any underneath patterns while Harmon will provide help on throws over Jackson’s head. As a result, Roethlisberger tries to drop a throw in the bucket between Jackson and Harmon but puts too much air under it allowing Harmon to intercept the pass. The Patriots got a gift here from Big Ben as he forces this throw into coverage, but Jackson’s understanding of where his help is and how he can play the receiver based on Harmon’s positioning is excellent.

Gilmore and Jackson made a habit of making plays on third down to get the Steelers’ offense off the field.

Pittsburgh spread the Pats out in an empty formation on this play, and the coverage allowed the rush to close in on Roethlisberger to force a throwaway. Jackson has Smith-Schuster in the left slot with Gilmore on Brown in the right slot. Roethlisberger’s first read in the progression is to Smith-Schuster’s side, and Jackson perfectly carries an out-and-up move by the USC product. For a rookie corner, double moves can often be the bain of your existence, but Jackson wasn’t fooled by the route and stays with Smith-Schuster the whole way.

As he has all season, Gilmore got his hands on two more passes to add to his league-leading total of 14 on the year.

Here, Gilmore is matched up with Brown in man coverage at the bottom of the screen. Brown beats Gilmore with a rocker step to get an inside release, but the Pats cornerback drives on the slant and undercuts the route to break up the pass. When Gilmore loses at the line of scrimmage, you’d expect this to be an easy completion for Roethlisberger and Brown, but Gilmore’s ability to click (recognize the slant) and close allows him to make a play on the ball from out of phase. The pass is a little bit behind Brown, but a lesser corner would have no chance there, and Gilmore doesn’t get enough credit for his recovery speed.

On Gilmore’s second pass breakup, he made a tremendous play to force an interception.

The Steelers set up a rub route on a slant to Brown to pick up the first down. Gilmore is in coverage on rookie James Washington in the slot who’s the point man on this pick concept. Washington releases downfield to create the pocket for Brown, but Gilmore fights through the pick and somehow pops the ball out of Brown’s hands and into the hands of Duron Harmon.

Although the Patriots did play some bracket coverage, they also trusted Gilmore and Jackson in man coverage with a safety rolled to one side of the field as help.

On this critical play late in the game, Gilmore has Brown at the bottom of the screen while Jackson is in man coverage on JuJu at the top of the screen. Devin McCourty plays over the top of Jackson, and Jackson stays with Smith-Schuster on a sideline out that was Roethlisberger’s first read on the play. Since Jackson has JuJu covered, Roethlisberger comes back to Brown on a go ball away from the safety. Big Ben underthrows the ball, but Gilmore is stride for stride with Brown, and the pass falls incomplete. It looks like Brown began to stack Gilmore late in the route, but it would’ve taken a good throw by Roethlisberger 50 yards downfield to beat the Pats corner.

Finally, if the Patriots pulled this one out, Jackson’s pass breakup late in the fourth quarter would’ve been the turning point in the game.

This time, the safety help is given to Gilmore at the top of the screen as the Pats bracket Antonio Brown. That leaves Jackson on an island with Smith-Schuster, and the rookie is all over the Steelers wideout. The pressure from Clayborn and Hightower forces an underthrow by Roethlisberger, and Smith-Schuster initially makes an acrobatic catch, but Jackson pries the ball loose by lodging his hand in between Smith-Schuster’s hands and body to rip the ball out.

Jackson has flashed terrific ball skills all season, and this play exemplifies his ability to track the ball in the air, adjust to the throw at the catch point, and his hand strength to get the ball out.

Following their second-straight loss, the Patriots have to prove to everyone that the dynasty isn’t crumbling before our eyes.

Offensively, they have to take the good things they did from the first half of Miami and focus on those while throwing out the last six quarters of football.

And defensively, the run defense is an absolute mess as players are losing at the point of attack and the gap integrity at the second level hasn’t been there in weeks.

But on the whole, what has been working for New England is the play in the secondary led by Gilmore and another undrafted gem in Jackson.

This season, the Patriots defense ranks ninth in passer rating allowed (88.5) and second in Pro Football Focus’ team coverage grades only behind the Chicago Bears (91.9).

They’ve had their ups and downs like any team, but the play of the secondary is one thing the Patriots can rely on moving forward.