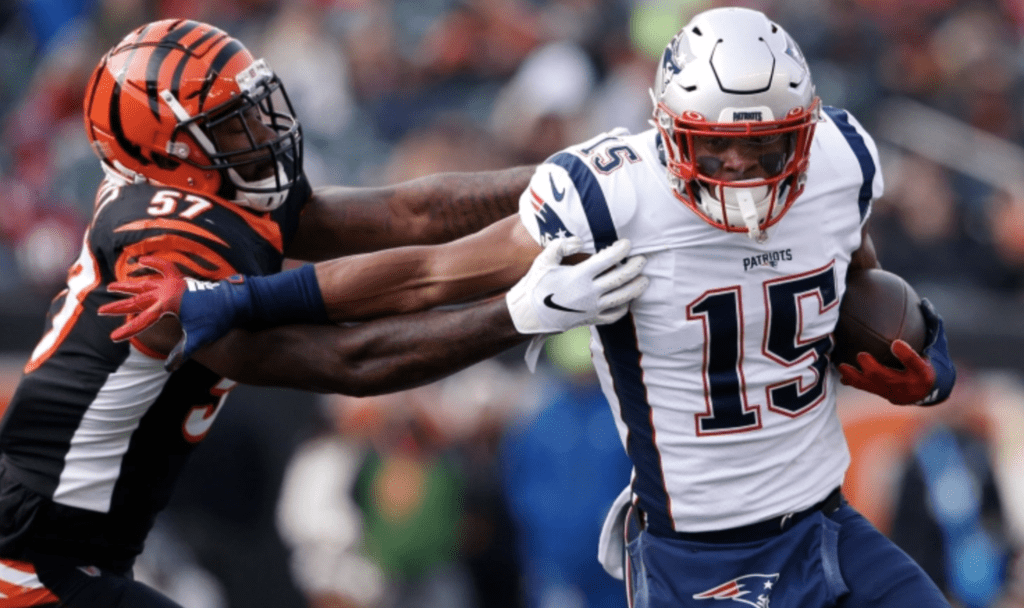 The Patriots beat the Cincinnati Bengals when they got off the bus on Sunday at Paul Brown Stadium.

Although the outcome was never in doubt, we needed to see some growth from the New England offense, and reminders of the dominant Patriots defense are always welcomed.

The development we saw offensively came in the form of rookie N’Keal Harry.

The Pats’ first-round pick had a pedestrian stat line with four touches, 37 yards, and a seven-yard touchdown reception, but the seeds are growing, and his talent is undeniable.

On his touchdown, Harry kept himself alive, and in bounds, to get open for Brady in the back of the end zone. The play showed fantastic awareness, chemistry with the quarterback, hands and catch radius to scoop the ball off the turf on a bullet from the GOAT.

The touchdown grab was great, but we knew he could make those kinds of contested plays; it was Harry’s progress in other areas that made Sunday’s performance so encouraging.

As offensive coordinator Josh McDaniels said this week, the rookie played several different spots and ran routes from various alignments. Plus, they got him involved as a ball carrier.

“N’Keal played a lot of different roles for us yesterday, aligned in a lot of different places in the formation which was a little bit of a change for him, but it was good so that he could do some things that suit him and that fit what we do on offense,” McDaniels said.

According to Pro Football Focus, Harry played 27 of his 39 snaps, 15 left and 12 right, on the boundary, and 12 snaps in the slot, with various slot alignments within those plays.

Here’s a chart with all the routes that Harry ran on Sunday, 15 different types of patterns on passing plays while adding two carries and other motions to the mix as well.

Before we get into some of his plays that counted, turn up the volume, and listen to a breakdown of Harry’s would-be 36-yard grab that was wiped out by a false start on Julian Edelman.

After the refs took the long reception off the board, Harry came right back to pick up the first down on third and eight. The defense is in a three-deep shell with the corners playing off-coverage. If the corner presses him, Harry will run another fade, but with the corner playing off, he converts the route to sit down at the sticks. Harry charges off the line forcing BW Webb into a backpedal, gets to the first down marker, and turns outside away from the linebacker/hook defender closing in on him. That’s a precise route and solid timing with the quarterback.

Later on, Brady came back to Harry on the same “under” route that the rookie ran poorly against the Texans, leading to an interception.

In Houston, Harry slowed up at the top of the pattern and got knocked off the ball at the point of attack.

Fast-forward to Sunday, and Harry’s effort was much better. This time, he explodes off the ball, bodies the corner at the top of the route, and comes back inside. The throw is behind him, but since the route was better, the pass falls incomplete rather than an interception.

Along with Harry’s development, we are starting to see McDaniels’ understanding of his skill set grow, leading to more opportunities for the rookie to make plays.

McDaniels started scheming ways to get the ball in Harry’s hands in the loss to the Chiefs. The Pats bring Harry in motion and run a misdirection screen with him sliding out of the backside of the formation. Once the ball is in his hands, his natural gifts take over, breaking three tackles in space en route to the end zone (we all know it was a touchdown).

Against the Bengals, McDaniels began giving the ball to Harry on end arounds and jet sweeps, and also brought him in motion to get him free releases and run after the catch chances.

Here, Harry comes in short motion to form a stack with Edelman to Brady’s left. The Pats quarterback goes to an open Edelman on a speed out, but the alignment creates a matchup for Harry against a linebacker over the middle with plenty of space to run. We’ll certainly see that motion again, and hopefully a full-speed Harry with the ball on the shallow crosser.

Along with schemed crossers and dump-offs, the Pats added sweeps and end arounds to Harry’s repertoire against Cincinnati.

On his first of two carries, Harry gets the ball on a jet sweep and gets the edge with some help from tight end Matt LaCosse. Once he has the edge, we see the danger of a six-foot-three, 225-pound receiver running at full speed in space. Harry runs through a tackle attempt by Bengals linebacker Germaine Pratt, gaining ten yards and a first down.

The Patriots then came back to Harry on an end around in the second quarter. The play design gets the edge this time, with the defense falling for the fake to the running back. But once Harry gets up the sideline, he shows natural vision to set up his blocks downfield. Harry presses inside, following LaCrosse’s block, and then bounces outside where there are more yards, leading to another first down.

From there, McDaniels built off of the successful Harry carries, and began using him as a decoy in motion to alter the defense.

Here, the Pats hand it off to Sony Michel on an inside zone scheme with a “sift” block from Harry. The Bengals are in man coverage, so when Harry comes across, his defender has to follow. By pulling the defender with him, the defense doesn’t have a force player to fill the backside. Michel sees the gaping hole and cuts upfield for a 12-yard gain.

When the Patriots drafted Harry in April, his potential in the New England offense was obvious, but he’s got a unique skill set as a contested-catch artist and pseudo-gadget player.

For those reasons, Harry’s early-career success hinges on how the Pats coaching staff uses him, and like any player, builds his role around his strengths.

Harry’s performance on Sunday, and his play against the Chiefs, show that everyone, QB, OC, and Harry, are growing more comfortable with each other, which is excellent news for the Patriots.

Throughout the season, Gilmore has shared with me different details about his approach as he dominates receivers every week.

In summary, Gilmore’s success comes down to three things: study habits, trusting his technique, and a game of chicken.

The Pats cornerback studies everything about his opponent and his matchup. Like most man-coverage corners, Gilmore will study his assignment’s route tree, go-to releases, tendencies based on down and distance and alignment, and other nuances.

However, he doesn’t stop there, taking the next step to studying the opposing offensive coordinator and passing game system. He knows what kind of offense they’re running (vertical or quick attack), situational tendencies, favorite route combinations, and so on.

Gilmore approaches every rep like a game of chicken, and he never wants to make the first move. He’ll keep his shoulders square to the receiver, knowing the receiver needs to make a move eventually, forcing the receiver to declare the route, then he pounces.

Save your fancy releases and fakes for another cornerback, because Gilmore isn’t falling for it.

The soon-to-be two-time All-Pro’s two interceptions on Sunday were fantastic examples of Gilmore’s preparation and technique, resulting in big plays on the field.

Here are audio breakdowns of the picks with insight from Gilmore himself in my analysis: