Film Review: the Current Pats Defense Has a Different Blueprint For Success Than Years Past

The Patriots defense has a blueprint for future success. 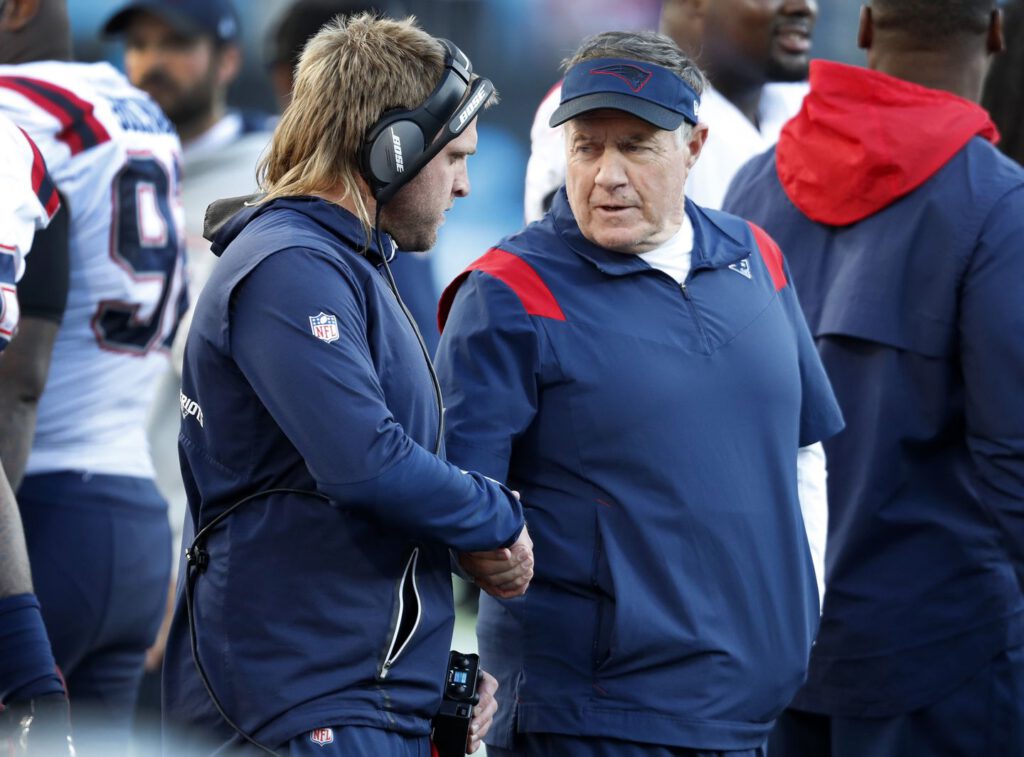 One of Patriots head coach Bill Belichick’s most famous lines is that real football begins after Thanksgiving.

Belichick’s teams typically improve steadily as the season progresses, with September being the worst month for the Patriots in terms of winning percentage and December being the best.

Although Thanksgiving is still a few weeks away, the Pats defense is on-target to peak when Belichick wants his team playing its best football.

Roster turnover is a regularity in the NFL these days. But the Patriots switched out key contributors to their defense in the offseason and lost a few long-time Pats in-season, causing the coaching staff to adjust.

After shutting down the Chargers and Panthers offenses over the last two weeks, Belichick is discovering a formula that their current group can execute at a high level.

Since then, Belichick has shifted his defensive philosophy to more zone coverage. Over the last four games, the Pats are playing zone coverage on 66% of their snaps, a noticeable change from only 40.4% zone in their first five games in 2021.

New England’s defense went from middle-of-the-pack to fifth in expected points added per play (-0.04) and fourth in points allowed (18.9) through the first nine weeks of the season.

Belichick downplayed the shift chalking it up to different game plans, telling CLNS Media, “those decisions are game plan-based, and, sometimes, as the game declares there, they go one direction or another based on what the offense is doing, how they are trying to attack us.”

“Steve [Belichick] does a good job of mixing things up on the calls with man, zone, pressure. I think our players are comfortable playing in all three types of calls. The variety is good.”

As Belichick alluded to, the Patriots’ coaching staff might decide to play more man coverage again in certain matchups. But it’s easy to see that zone coverage works with their current group.

Defensive play-caller Steve Belichick is mixing in some blitzes. However, New England is mostly winning in the trenches with four-man rushes since they’ve been successful this season.

The Patriots’ defense currently ranks sixth in pressure rate on four-man rushes (37.4%) thanks to a two-headed monster in their pass rush led by Matthew Judon and rookie Christian Barmore.

In the secondary, the Patriots might not have the cover talent they did in years past to play most of the game in man coverage. But they’re versatile and instinctive in the backend.

The Patriots are marrying a more potent pass-rush and run defense with a better coverage system for their personnel in the secondary, and now it’s all coming together for them.

A trend that began earlier in the season for the Patriots that’s now turning an even more dominant corner is their first and second down defense.

Last season, the Patriots struggled to create negative plays and prevent chunk gains on early downs, allowing offenses to stay ahead of the chains and avoid third and long. In fact, Pats’ opponents averaged yards to go on third down was fourth-worst in the league last season (4.5 yards).

This season, the Patriots are making it difficult on teams with a run defense that’s allowing a 37.2% success rate on early-downs and play-action defense that’s fourth-best in the NFL.

As a result, opposing offenses now have 5.6 yards to go on average on third down (15th).

In their win over the Panthers, the Patriots knew Carolina runs the ball over 42% of the time and would try to test them with star running back Christian McCaffrey back in the lineup.

New England opened the game in a 3-4 base defense with three defensive tackles along the defensive line, eventually holding the Panthers to 3.4 yards per rush on 23 carries.

The cutup above shows a Pats defense that’s disciplined in their run fits, physical on the edge to keep ball carriers from turning the corner, and swarming to the football to make negative plays.

More importantly, the Patriots were again stellar against play-action, where Panthers quarterback Sam Darnold averaged 4.0 yards with an interception on eight play-action attempts.

The approach for the Pats on early downs is to play either cover-three or cover-two in the backend, allowing them to take away the big plays off play-action.

Carolina’s offense features bootleg action plays designed to get Darnold on the move and create big plays through the air with easily defined reads.

On J.C. Jackson’s pick-six, Barmore closes down on Darnold in a hurry to prevent him from looking upfield, and Judon applies late pressure when the tight end releases into the flat. The two Pats’ pass-rushers hurry Darnold into an errant throw, the initial downfield coverage is good too, and Jackson takes the overthrown pass back to the house.

The Pats did an excellent job of containing Darnold on the bootleg actions all afternoon. Above, defensive tackle Lawrence Guy keeps his contain on Darnold as he rolls out of the pocket, hurrying him into a throw. The linebacker level falls underneath the two crossers while Jalen Mills (bottom of screen) plays to his inside help and leverages D.J. Moore’s route, and there’s nowhere for Darnold to go with the ball.

Here’s another example on a more traditional play-action drop-back. The Panthers run a two-man route combination known as a Yankee Concept (post-crosser). The second level of the defense falls underneath the crosser while Devin McCourty jumps the crosser from his post-safety position, knowing that Joejuan Williams will replace him in the middle of the field to help Jackson on the vertical route with no threat into Williams’s zone. The initial coverage holds up, and Deatrich Wise wins a one-on-one on the backside to pressure Darnold into a throwaway.

New England had their early-down defense rolling, putting the clamps on McCaffrey on the ground and eliminating big plays off play-action.

From there, the Pats’ new coverage plan came to fruition in longer down-and-distances.

As we mentioned earlier, the Patriots are playing more zone coverage recently in the backend, but many of those zone calls may look like man coverage in certain ways.

The reason for that is that Belichick typically installs match zones defensively, something he helped create alongside former assistant Nick Saban back in their Cleveland days back in the 90s.

“I came from primarily a zone system at the Giants. Nick came from, I’d say, a man and a blitz system in Houston with Coach [Jerry] Glanville. And then a lot of zone principles from Coach [George] Perles at Michigan State — we merged a lot of those things together,” Belichick told me during the 2018 season.

Belichick’s Browns had a similar schematic issue as the current Patriots: they didn’t have the talent to match up in man, but teams were flooding their deep zones in cover-three with four verticals.

The adjustment was to create rip/liz match, where defensive backs match vertical stems (usually after 8-12 yards) like it’s man-to-man and pass off “under” routes like its zone.

At the top of the screen, the outside receiver runs a shallow drag, which triggers an “under” call for Mills and Bryant. However, the outside receiver on the bottom of the screen runs a go up the right sideline, so Joejuan Williams matches it. Knowing Mills is working back towards the middle of the field on the deep-third, and Bryant is taking the shallow cross, McCourty (middle-read/third) and Dugger (weak hook) are responsible for squeezing the deep crosser from number three inside the slot. Panthers offensive coordinator Joe Brady makes a good play-call here, but the coverage is simply better from the Pats, who execute perfectly.

Mills and Bryant make a similarly impressive exchange out of cover-three in this play. The Panthers try to clear out Bryant with a vertical route from the slot and hit the deep out against off-coverage on the outside. However, Mills and Bryant read it out flawlessly, with Bryant staying underneath the deep out in his hook zone and Mills working over the top of the seam.

The Pats disguise a match-zone by having J.C. Jackson travel into the slot, making it look like man coverage here. Instead, when Moore runs a shallow cross, Jackson passes him off and rallies back into the middle of the field in zone. On the other side, Bryant plays a perfect technique by staying over the top of the vertical route as he reads the quarterback. Once Darnold’s eyes tell him he’s throwing to Moore, Bryant breaks on the route and lays the wood.

New England only called cover-one man, their bread-and-butter over the last four seasons, on eight coverage snaps in Sunday’s win.

When they did dial-up man coverage, they had something ready for the Panthers. This time, the call is “cover-one double #22,” with McCaffrey getting the double-team in the red zone. That forces Darnold to work the three-receiver side, and when he gets man coverage, he makes the correct read to go to Moore. Unfortunately for Carolina, Judon hurries Darnold out of the pocket with an inside move, the ball is underthrown as a result, and J.C. Jackson plays his press-man technique perfectly to come up with the interception.

New England’s defense played two quarterbacks in Justin Herbert and Sam Darnold that Belichick has figured out over the last two weeks. And Herbert is still only in his second season.

The question now for the Patriots is can they replicate their current blueprint against better competition this week against Cleveland and in their two matchups with Buffalo?

Belichick has laid the foundation, and the formula exists; now it’s time to play your best football after Thanksgiving.