Film Review: What Went Wrong For the Patriots Offense and Where They Go From Here 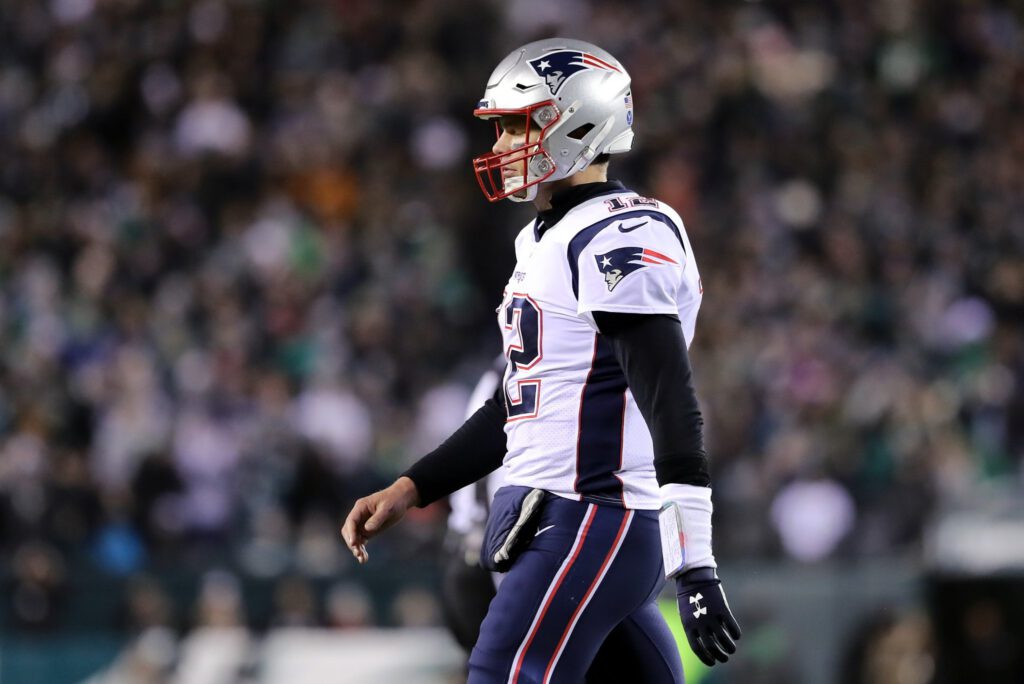 The Patriots offense is statistically having one of its worst seasons in over a decade.

After the win over the Eagles, quarterback Tom Brady’s displeasure with another lackluster performance by his offense was apparent at his post-game press conference.

Brady had one of his worst games of the season, receiving a 58.5 game-grade from Pro Football Focus, making Sunday his worst performance outside of the Buffalo game. But the Pats quarterback isn’t the only one to blame.

Let’s start with the first piece of the game plan against Philadelphia designed to slow down a potent Eagles pass rush.

“Philly had an aggressive rush style and an aggressive unit up front that tries to get to the quarterback,” offensive coordinator Josh McDaniels said. “There’s some potential unseen benefit from utilizing them periodically during the course of the game to maybe slow down a rush.”

The Patriots ran eight screen passes in Philly, completing six of them for 60 yards. However, two of those eight accounted for 42 of the 60 yards, and the other six were sloppy.

On New England’s first third down of the game, they had a well-designed screen to Julian Edelman called against man coverage. The idea was to create some misdirection with Edelman motioning into the backfield and releasing in the opposite direction as the back. The lone receiver on the left side crossed over the middle to pick Edelman’s man.

As the play develops, the Patriots get what they want, as Philip Dorsett gets in the way of the defender in man coverage on Edelman while he and the offensive line get downfield.

When Brady releases the ball, Edelman has two blockers accounting for the two closest defenders and the entire sideline to operate.

Edelman trips on left guard Joe Thuney on his way out while Eagles pass rusher Brandon Graham splits Thuney and left tackle Marshall Newhouse to put pressure on Brady. A big play was there, but poor timing and execution caused an incomplete pass and a punt.

A few series later, the Patriots faced another third down, this time in the red zone, where they had to settle for a field goal after a Brady throw away. The Pats have to clearout routes to open things up underneath for an out route by James White and a shallow crosser by N’Keal Harry.

At this point, the pressure in the first quarter started to affect Brady’s feel for the pocket. The Pats have a matchup with White on a linebacker. Brady feels the pocket collapse slightly, moves off his spot, and resets. In doing so, he misses White, who is open along the sideline for the first down. Brady pulls the ball down, eventually leaving the pocket, and throws it into the stands. Brady might’ve had Harry too on the crosser.

Here’s another example where there were open receivers, but the timing and blocking let the Patriots down, and Brady didn’t make the best read either. The Pats have a flood concept with three receivers to Brady’s right and an angle route from Rex Burkhead out of the backfield.

When Brady gets to the top of his drop, he likely knows its man coverage, and he has two receivers opening up downfield, Meyers on the corner route and Burkhead on the angle route.

As we roll the play, Meyers runs into a bubble of space, and Burkhead gets inside of Malcolm Jenkins over the middle. But right tackle Marcus Cannon gets beat, forcing a bad throw. Although pressure impacted Brady, that’s a play you’d like to see him make.

Here’s one last example of Brady failing to see things at his usually elite level.

The Patriots have their infamous “HOSS Z Juke” concept called against a delayed blitz by the Eagles. The fact that Brady didn’t make the right decision on a core concept is surprising.

With HOSS, if the defense sends a blitz at the quarterback, Brady’s “hot” read is to Edelman on the option route. You’ll see the right side has two open receivers as well, but the by the book decision would be to hit Edelman, who sits down quickly, giving Brady that outlet. Brady doesn’t see the blitz coming and gets stuck looking left at the HOSS combination. He doesn’t throw hot to Edelman and is sacked.

In many of these instances, Brady was a part of the problem rather than the solution. But it’s a combination of factors that are leading to the struggles of the offense.

To get back to playing at a Super Bowl level, the Patriots skill players need to improve the little things about their route running and work at the catch point. There were too many instances on Sunday where receivers were rounding off routes, running the wrong routes, or cutting corners. Plus, Brady’s pass-catchers also dropped four passes, including a big one in the end zone by Julian Edelman. Those little things add up quickly in an NFL game.

And along the offensive line, although Brady was only pressured on a modest 33 percent of his drop-backs, they’re still getting held back by a weak link at left tackle and inconsistent blocking across the board. Hopefully, Isaiah Wynn’s return will offer some stability and improve the entire unit. He’s no savior, but OL play is all about having a five-man unit that can perform at a high level, and one or two weak links certainly brings the entire group down.

The talking heads will harp on a lack of talent and flash around Brady, but the Patriots need to clean up the details as an offense.

We also tend to lose sight of the fact that the Patriots still have six regular-season games to figure things out. Teams practice, play and get better. That’s how all of this works.

OTHER FILM NOTES FROM SUNDAY

1. Thoughts on N’Keal Harry’s Debut After Reviewing the Tape

After reviewing the film, rookie N’Keal Harry was as good as you could expect in his debut. He competed as a blocker and flashed the receiving skills that made him a first-round pick.

As Brady grows more comfortable with Harry, and the rookie becomes more of a focal point of the offense, he’ll see more deep targets, which will most likely be 50-50 balls that take trust between receiver and quarterback.

Here, Harry is single covered at the top of the screen. He shows good build-up speed to get over the top of the corner, but it’s a long throw, and Brady never looks his way. In the future, Brady will hopefully give Harry a chance to make plays down the field in those types of situations.

On Harry’s first career reception, he ran a nice slant route against off-coverage to pick up the first down. He charges off the line to close down the space between himself and the corner, plants and drives out of his break as he should. With his big body, he can box out corners, meaning if he gets leverage as he did there, it’ll be nearly impossible to defend.

Harry’s three catches for 18 yards weren’t much to write home about, but the flashes were there.

2. Patriots Defense Shuts Down Miles Sanders in the Passing Game

Along with an expansive plan for tight end Zach Ertz, the Pats also focused on Miles Sanders in the passing game, knowing that Philly would call shot plays to the speedy running back.

The Eagles love to send Sanders on vertical routes out of the backfield, wheel routes, in particular. On the play above, the Patriots show a double-A gap “mug” front with two linebackers standing on the line of scrimmage. Based on the look, Carson Wentz thinks one of those linebackers will be in man coverage on Sanders and checks to the wheel route. Instead, the Pats drop Kyle Van Noy off the edge to track Sanders. He stays over the top of the Eagles running back, and Wentz’s pass sails out of bounds.

Here’s another example where Simon drops off the edge to stay over the top of Sanders, allowing the Pats to blitz Hightower and drop Bentley in an underneath zone, leading to a strip-sack by Danny Shelton.

Sanders came in averaging 42 receiving yards in his last seven games. The Patriots held him to two catches for nine yards on four targets, despite Philadelphia’s efforts to get him the ball.

On his Monday morning conference call, Patriots head coach Bill Belichick sung the praises of defensive tackles Danny Shelton and Lawrence Guy after their performances in the win.

“I thought they did a good job for us for all four quarters. They really played well and they played hard, controlled the line of scrimmage, did a really good job of defeating blockers and got off and had production, tacklers as well – which is hard for a defensive linemen,” Belichick said.

Let’s start with Shelton, who led the team with five run stops in the victory over the Eagles.

Here, the Eagles are running a counter scheme with the tight end and backside guard pulling in front of the back. Shelton takes on right guard Brandon Brooks, one of the best interior lineman in football, and tosses him to the side. Shelton’s pad level, upward momentum to create leverage, and hand usage to disengage are phenomenal. He whiffs on the first tackle attempt but makes a high-motor play to come back and finish the job. Also, notice Kyle Van Noy taking on the pulling guard. Those are the little things that keep everyone singled to make plays.

Shelton’s partner in crime, Guy, added three stops of his own to stifle Philly’s rushing attack.

On this play, the Eagles put an extra offensive lineman and two tight ends on the field in the shadow of their goalposts. Philly ran a weak zone scheme, meaning the play goes away from the tight ends. Guy is in the C-gap between the right tackle and sixth offensive lineman, and splits a combination block, knifing into the backfield to bring down Sanders.

Early on against the Eagles and before the bye in Baltimore, the Pats defensive line got pushed around. But they flipped a switch on Sunday after Philadelphia’s hot start.