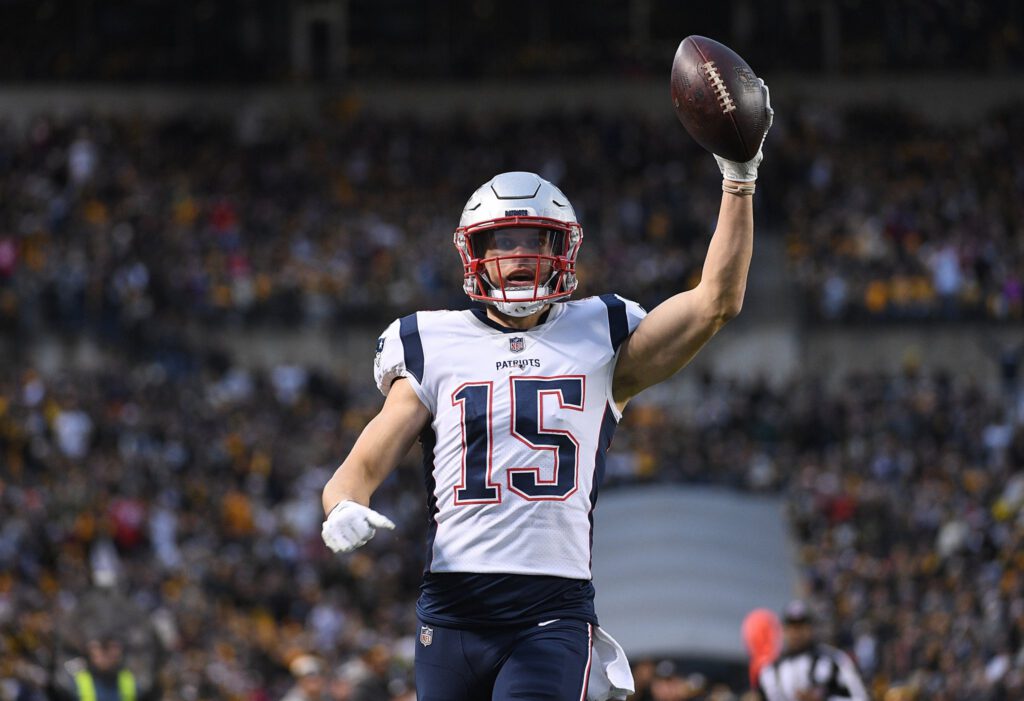 Hogan spoke about a one-game playoff for the Patriots this week to earn a first-round bye, the identity of the offense moving forward, and how the offense as a whole could improve in the passing game.

However, there was an elephant in the room regarding Hogan’s lack of targets in Sunday’s win over the Bills as we all try to get to the bottom of what’s preventing him from catching more passes.

After last week’s news of Josh Gordon’s indefinite suspension, all head coach Bill Belichick had to say about Hogan was, “he’s been healthy all year, so that’s a good thing.”

And then there’s Sunday’s win over Buffalo, where Hogan led all Patriot wide receivers with 62 snaps (23 pass routes) but wasn’t targeted in the game by quarterback Tom Brady.

“You’re just a competitor,” Hogan said when asked if he’s frustrated about his lack of targets. “You want to go out there and do what’s best for the team and help your team move the ball downfield, make plays, help your team win football games. It’s all about opportunity in this league, and when you get the opportunity, you have to make the most of them.”

In Hogan’s first two seasons with the Patriots, he averaged nearly five targets and 46.6 receiving yards, and in nine regular-season games last season he saw over 6.5 targets per game.

This season, Hogan is averaging a shade under three targets and 31.2 receiving yards per game.

And among the 39 receivers that have played at least 700 snaps this season, Hogan has the fewest targets (44).

Hogan was then asked if the trust and chemistry are still there with Brady and responded with two words: “yeah, absolutely.”

There’s a lot to unpack here on the tape when it comes to Hogan’s drop off in production.

First, Brady hasn’t looked his way at times in situations where Hogan does find openings in the coverage for reasons outside of his control.

On this play from Sunday, it’s third down and six for the Patriots in the third quarter. Hogan is lined up as the “X” receiver to Brady’s right in a reduced split. He then runs a “stick” route where he sits down at the first down marker. The Bills blitz and Brady immediately throws the ball to running back James White in the flat who does his best to elude multiple tacklers but comes up short of the line to gain. As you can see, Hogan is wide open clearly in Brady’s view, but the ball is out of his hands immediately on the pass into the flat. From this perspective, that speaks to Brady’s struggles with hanging in the pocket and has nothing to do with Hogan.

Then, there are a few instances where Hogan is open on the play, but Brady’s progression takes him to another receiver; that was the case on the failed game-tying drive attempt at the end of the loss in Pittsburgh.

On Julian Edelman’s 34-yard reception, Hogan is open down the right sideline if Brady wants to go to him. However, Brady would later say in an interview that he was locked onto Edelman on the play, who’s also open with the Patriots running a cover-2 beater. They have Hogan, and Josh Gordon running “go” routes down the sideline to widen the safeties, and Edelman runs a seam route into the middle of the field. The Steelers invert the coverage with one safety dropping into a deep zone in the middle of the field while the other rotates back into a split safety coverage, and nobody runs with Edelman down the seam. In this play design, Edelman is Brady’s first option, and if he’s as open as he is here, he’s going to get the football.

Next, there are instances where Hogan might create separation, but the pre and post-snap read take Brady away from him in the progression.

Here, Hogan (right slot) is going to beat his man with a nifty release, but Brady reads the safety shading over Hogan’s route pre-snap. The safety drops into a deeper zone than maybe Brady anticipated, but Hogan’s seam route is still taking him right into the post safety in the middle of the field. Brady works the other side of his progression and throws an inaccurate pass to an open James White over the middle.

And finally, a large part of Hogan’s role in the Patriots offense is to clear out space for other receivers, something he told me that every receiver on the team embraces.

“There’s going to be games where you asked to do things that people aren’t always going to see,” Hogan said. “As a receiver, whoever that is that’s asked to take on those roles, I think everyone embraces that and does whatever is best for the team to try to get wins.”

“I love celebrating my teammates’ success. Any time I can take a couple of guys out of there or get someone open, whatever the play is called, someone’s able to have success because of something you were able to do, I’m pretty pumped about that.”

On this first-quarter catch by Julian Edelman, Hogan’s role on the play is to push vertically downfield to take the coverage away from the sideline so that Edelman has space to run an out route. Hogan takes the boundary corner with him and maybe holds the safety for an extra second, and Edelman hauls in the pass.

Later, Hogan had a similar assignment on a clear out route on a failed screen pass to James Develin. Once again, Hogan takes his man downfield away from the play leaving space for the screen to develop. Unfortunately, Brady gives up too early on the screen, but Hogan did his job on the play.

Hogan remained steadfast in his support for his quarterback and insisted that their on-field relationship is as good as ever.

Asked what gives them confidence after a few off games Hogan said, “what we’ve done in the past. How hard we’ve worked on the passing game, and obviously the guy who’s leading us with the ball. We have all the faith in the world in him, and I have all the faith in the world in the guys in our locker room. A lot of guys are capable of making a lot of plays in the passing game, and when our offense is required, I think everyone will step up to the challenge.”

From the outside looking in, it appears that Brady and Hogan aren’t on the same page.

But at least publicly, the two continue to say the right things about each other.

And in some instances, legitimate football decisions are being made by Brady that take him away from Hogan.