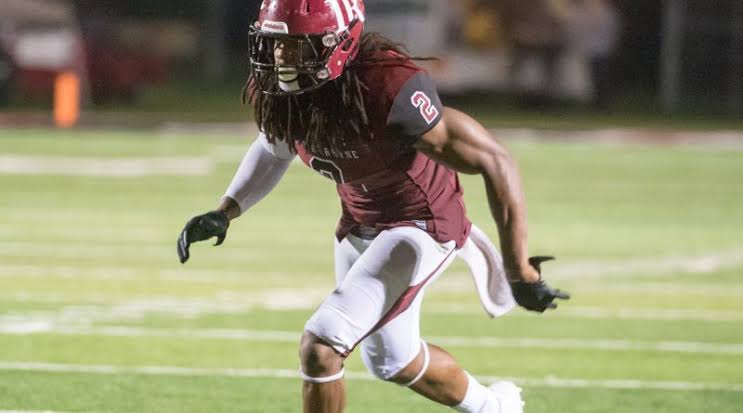 The Patriots and second-round defensive backs go together like Boston and championships.

Bill Belichick surprised some by selecting Lenoir-Rhyne safety Kyle Dugger with the Patriots’ top selection in the 2020 NFL Draft.

But before you write Dugger off as a bust due to the Pats’ draft history or that he’s the highest selection ever from DII Lenoir-Rhyne, he’s a deserving selection for several reasons.

First, the new Pats safety tested in the 99th percentile with a relative athletic score of 9.57 out of ten, trailing only Southern Illinois’s Jeremy Chinn as the most athletic safety in this class.

Dugger ran a 4.49 40-yard dash with a 42-inch vertical while broad jumping over 11 feet, giving him an elite combination of size (6-1, 217), speed, and explosiveness that are obvious on tape.

Due to his athleticism, Dugger can play all over the defense, including free safety, guarding tight ends and playing the run in the box, and contributing on special teams on multiple units and as a successful punt returner.

Patriots fans might scratch their heads over taking a division two prospect in the top 50, and Dugger himself admits that the level of competition in college was below him.

“The competition isn’t all that great for me. I do feel like I’m way ahead of the competition here,” Dugger told Justin Melo of USA Today last fall.

However, Dugger gave us a very Patriot-like answer when asked what he can take away from his days at Lenoir-Rhyne, explaining how he began preparing and learning the game like a pro.

“For me, it was definitely the exterior part of the game, or basically the stuff you see that doesn’t go into game day, that you don’t see on the game day – the film study, how you prepare, things like that is the biggest takeaway for me, how to practice and things like that. So, there was definitely a lot of positive I could take away from playing at that level outside of the actual game play and preparation,” Dugger told CLNS Media.

Dugger is on the older side as a fifth-year senior (24) and will need to prove doubters wrong that he can dominate at the NFL level as he did in college.

But we’ll explain the pick in a comprehensive film breakdown of the versatile and athletic Dugger, who New England pegged as their future at the safety position:

Back in January, there was a lot of buzz at the Senior Bowl about Dugger. The only DII invite shut down every tight end in Mobile all week, a list that includes fellow draftees Adam Trautman, Josiah Deguara, Brycen Hopkins, and Harrison Bryant.

With Bill Belichick and Nick Caserio in attendance, Dugger put on a show during one-on-one periods flashing loose hips to stick with receivers through their breaks and impressive closing speed to break up passes in man coverage.

“I think the Senior Bowl really helped Kyle,” Belichick said during his post-draft video conference. “There he’s running a pro defense against a pro offense with soon-to-be pro players. Whether it was one-on-one drills, catching punts, tackling, I think you could really see he was able to compete very favorably at that level of competition and his scheme represents something close to what we’d be doing.”

“It was a short window, but it was a full week of practice, a game. I think I saw a lot of improvement during the week and feel like this is a kid that’s smart, that works hard, that has a lot of ability. We’ll see how much time it takes. I’m sure it will take some time to make those adjustments. I’m confident he’ll work hard and be able to handle the things we give him. In time he’ll be able to do them. Exactly how long that takes or will take, I don’t know.”

In his final season at Lenoir-Rhyne, Dugger allowed a completion rate of under 35 percent into his coverage, according to Pro Football Focus.

Here, Dugger shows smooth transition to stay with the slot receiver in off-man coverage. He gets a little grabby at the top of the route, but quickly takes his hands off once he’s in phase, and takes away the quarterback’s first read, leading to a sack.

Along with man coverage skills, Dugger can also ball-hawk in intermediate zones. He’s a little raw anticipating and reading routes, but he breaks on the ball quickly when he sees things.

On this play, Dugger is in a robber role rotating down from high zone. He reads the quarterback’s eyes and jumps the stick route for an interception.

Dugger’s primary role will likely be as a strong safety or sub-linebacker, where he’ll be a matchup player in man coverage and a physical presence against the run.

With a 32-year-old Devin McCourty and Duron Harmon in Detroit, the Pats need a deep safety in their big dime and nickel packages, while also looking for McCourty’s successor.

Although most peg Dugger as a box safety and nickel backer, he played mostly deep safety in college, and has the range and ball skills to patrol the deep part of the field with playmaking qualities.

Here, Dugger is playing a post safety role in centerfield. The offense causes him to false step initially with a stretch play-action concept, but Dugger has the hip fluidity to flip-and-recover to the post route and times his jump perfectly to high-point the ball for an interception.

Along with flip-and-run skills, Dugger also has the range to go sideline-to-sideline in high zone.

On this play, the offense attempts a double pass with the quarterback tossing the ball out to his wide receiver in motion. The boundary corner at the bottom of the screen takes the cheese, leaving his man wide open behind the defense, or so they thought. Dugger comes flying from the middle of the field to break up the pass along the sideline to avoid a big play.

Dugger might have a bigger impact playing closer to the line of scrimmage, but he has 4.49 range, decent instincts, ball skills, and solid open-field tackling to play deep safety as well.

The most pro-ready aspect of Dugger’s game is run defense, where he’s a heat-seeking missile that makes tackles all over the field, finishing with an 81.7 run defense grade last season.

At 217 pounds, Dugger has excellent size for a safety to take on blocks and then drop ball carriers with a huge hit stick that makes for highlight-reel plays.

My goodness. Here's a taste of Safety Kyle Dugger's athleticism. Look at his balance and footwork as he braces for contact and spins out of it…INCREDIBLE pic.twitter.com/Wb2kDG2XLZ

Here, Dugger shows off his tremendous athleticism by spinning out of a block to find the ball and save a touchdown after the outside corner misses the tackle.

Along with impacting running plays aligned closer to the line of scrimmage, Dugger has a ridiculous downhill trigger to come from high zone and blow up ball carriers.

Dugger has insane range to prowl as a run defender, isn’t afraid to mix it up with blockers, and will punish ball carriers once he arrives at the ball.

Lastly, Dugger was a running back for most of his youth, along with playing defensive back.

Due to his natural abilities as a ball carrier, Dugger is an extremely effective punt returner with six career punt return touchdowns at Lenoir-Rhyne. At the division two level, Dugger made kick coverage players look silly with the ball in his hands.

The Patriots didn’t draft Dugger only to return punts, but they rotated through a few different returners last season and could use a permanent option back there outside of Julian Edelman.

For many that don’t know Kyle Dugger or Lenoir-Rhyne University, taking him with the 37th overall selection might be seen as a reach.

According to a league source, Dugger was a second-rounder on most teams’ boards and would’ve heard his name shortly after New England made him their top choice in the 2020 draft.

The Patriots explored trade back scenarios, but either didn’t love the return or didn’t want to risk losing Dugger, which makes sense after two safeties went at 44 (Delpit) and 45 (Winfield).

As Belichick said, it will take Dugger some time to adjust to the speed of the NFL game and a more complex defensive system.

He also needs to improve his anticipation and eye discipline from high zone, as he gets run out of areas by dummy routes following receivers rather than the eyes of the quarterback.

But his elite athleticism, four-down value, positional flexibility, and tackling ability are hard to pass up for a team that needs a young safety.