Film Session, Defensive Execution: The Making of a Celtics Blowout Win Over Lakers 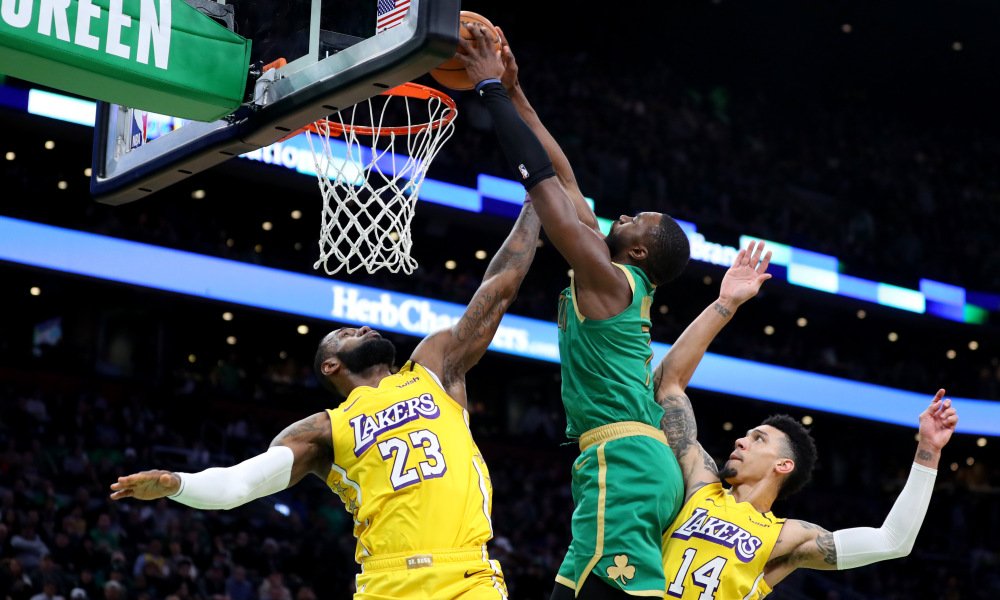 In the midst of injuries, a pair of losing streaks and poor defensive performances, the Celtics met their biggest challenge of the regular season.

The Lakers, winners of nine of their last 10 games, entered TD Garden as the clear-cut favorites. While the Celtics, a team searching for their first win in over a week, were practically limping into Monday’s primetime Martin Luther King Day showdown.

Kemba Walker and Jaylen Brown woke up the morning of unsure if they would be cleared to play, the same thing could be said about Lakers All-Star center Anthony Davis. However, the basketball Gods granted our wishes — both starting fives were intact and ready to go by tip-off but it was the Celtics that raised everyone’s eyebrows when they blew the Lakers off their parquet floor and in the process, restored faith.

A 139-107 Celtics victory isn’t exactly what most had it mind ahead of Monday night. However, behind a well-balanced scoring attack and gritty defense, Stevens’ group erased an early 8-0 deficit and then put on a clinic.

“Yeah, I mean, we needed to play well,” Stevens said Monday night. “You know, that doesn’t guarantee results but we had a — like I said this morning — we had a great film session yesterday that was very much like there’s a lot of things that we can control and control better than we have. That doesn’t guarantee you’re going to make shots and things are going to go your way like this. We were fortunate to put the ball in the basket quite a bit but we really competed on both ends.”

The Celtics took a 24-point lead (104-80) into the final frame as fans at TD Garden — in a playoff-like atmosphere — could already smell Boston’s biggest win of the year.

“We needed it,” Walker said. “This was a really important game for us and we treat it like it, we executed. This is one of those games to help us realize how talented we are, how good we can be. We know how bad we’ve been playing so hopefully we can get back on track.”

Walker and Brown (20 points) were two of five Celtics players that finished with 16 or more points. Jayson Tatum’s 27 points on 10-of-18 from the floor led the charge, Enes Kanter (18 points, 11 rebounds), who checked in and made an immediate impact, scored all of his points in the first half while anchoring the defense and Hayward finished with 16 points, six rebounds, and five assists.

The fact that JaVale McGee’s 18 points in 18 minutes led the Lakers in scoring speaks to just how rattled the Lakers looked on the offensive end of the floor. LeBron James (13 assists) finished with 15 points on 5-of-12 from the floor — the third-lowest point total of his career against the Celtics — while Davis, who was on a minute-restriction, added nine points, four rebounds and two blocks in 22:33.

The Lakers offense struggled to find its momentum and when Walker was asked what resonated with him most following Saturday’s film session, it was no coincidence that his answer was related to the Celtics’ defense.

“For us, it was probably our ball pressure — where we allow teams to kind of operate their offense. When we’re good and when we’re bad” Walker said. “When we’re really good we’re up on the basketball, teams are starting far out but when we’re bad, obviously, it’s the opposite. Tonight we really did that. We pressured the basketball.

“Those guys were operating (Lakers) from far out and we were just scrambling, helping each other, talking, running all over the gym, you know. Just making a lot of hustle plays. Just playing the way we know we can play.”

Boston will finish its homestand against rookie standout Ja Morant and the Grizzlies Wednesday night before its three-game road trip.