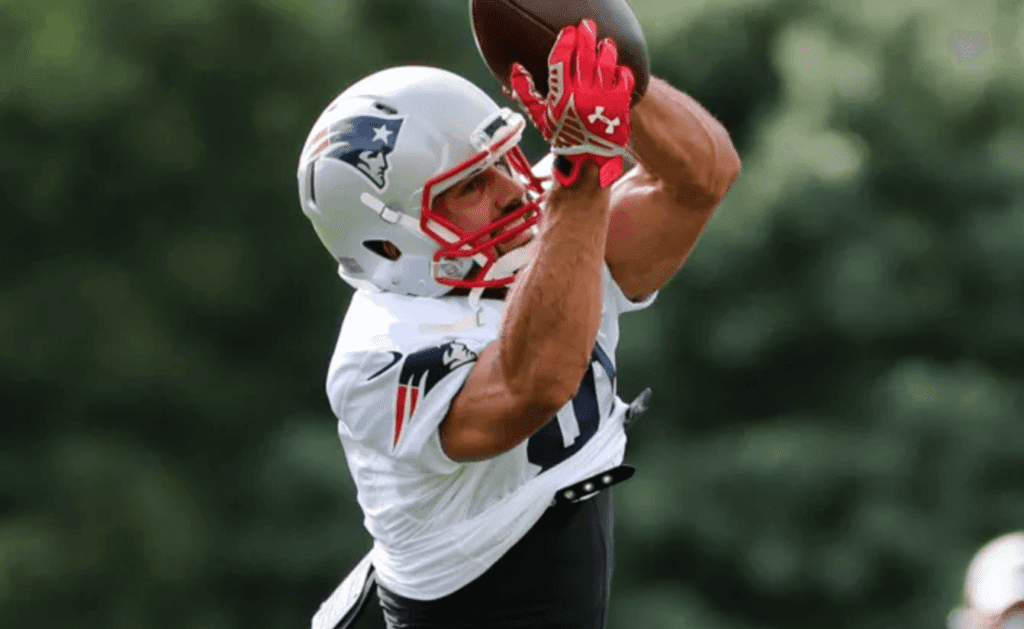 FOXBORO, MA– My first trip to Patriots training camp this season was a Bill Belichick special.

The team went through a light contact workout behind Gillette Stadium with a heavy emphasis on special teams, situational football and conditioning as the rainy elements didn’t stop the head coach from wrapping practice with sprints on the daunting hills behind the Patriots’ practice facility.

The kicking game, including a look at the team’s strategy with the new kickoff rules and the punter battle between Ryan Allen and Corey Bojorquez, took center stage.

Although the primary focus was on special teams, there were some notable Patriots in attendance, including the newest Patriot Eric Decker, and some other noteworthy tidbits that are worth monitoring as we move forward:

Decker didn’t do much in his first practice with his new team, but the former Broncos, Jets and Titans receiver did go through a light practice after the team inked the 31-year-old to a one-year deal on Friday. In one session, Decker worked with Tom Brady and a small group of Patriots receivers running routes in a positional drill, which means the Pats are trying to incorporate Decker into the offense as quickly as possible. Decker will wear no. 81 as a member of the Patriots, the same number as now Hall of Famer Randy Moss rocked in New England, but Decker’s role will likely be much different than Moss’s with the Patriots. Decker lined up in the slot 51% of the time as a member of the Titans last season, and that number jumped to 68.3% with the Jets in 2015, according to PFF (Decker only played three games with New York in 2016 due to a torn rotator cuff). The Patriots released wideout Jordan Matthews and immediately signed Decker, signaling that the 6-foot-3 wideout is their new option to play a role as a jumbo-slot receiver this season.

2. Braxton Berrios Shines as a Returner

I came away very impressed with my first look at the Patriots’ sixth-round pick from the 2018 draft. Berrios saw a lot of work in the special teams-heavy practice as a returner, both on punts and kickoffs, and wowed fans with a few long returns albeit in non-contact situations. We didn’t see Berrios in a live situation as a  returner, but the former University of Miami star showed off a lightning-quick first step and the same explosiveness that was evident on his college tape. With Julian Edelman sidelined for the first four weeks, and Danny Amendola now in Miami, Berrios has a terrific opportunity to make the 53-man roster as a returner that can eventually develop into a slot receiver down the road. Remember, it took Julian Edelman four seasons to surpass Wes Welker as a primary target in the Patriots’ offense, and Edelman made the team from 2009 to 2012 as a returner.

During Saturday’s session, both Rowe and McCourty ran with the first-team defense alongside Stephon Gilmore. However, today it was Rowe that spent most of the morning in the slot while McCourty practiced as the boundary corner opposite of Gilmore. There wasn’t a lot of live action or 11-on-11’s in today’s session, but it appears that the two veterans are still in the lead for the second and third cornerback spots, at least for now. Rookie Duke Dawson also saw time in the slot with the first-team defense matching up with Julian Edelman a few times.

After practice, we got a chance to talk to Trey Flowers, and he had some interesting thoughts on new pass rushing consultant Joe Kim. Kim, a martial arts specialist, was brought in by the Patriots’ coaching staff to work with the Patriots’ offensive and defensive lineman on hand usage in the trenches. Flowers mentioned that Kim has a great understanding of technique and fundamentals when it comes to pass rushing, and said Kim provides “valuable information” to help improve Flowers’ game. The Patriots have always put a heavy emphasis on hand usage and playing with leverage along the line of scrimmage, and it appears that Kim is making an impact in his first season with the team.

The darling of Pats camp has undoubtedly been second-year tight end Jacob Hollister, and Hollister once again was apart of a small contingent of receivers that worked with Tom Brady on Saturday. Hollister’s role as a “move” tight end that can play both in-line, out wide and in the slot was on full display as he ran routes from different alignments in his side-session with Brady. We’ve seen other training camp stars flame out in the past at the tight end position in New England, but in his second year with the Pats, it appears that Hollister is well within Tom Brady’s circle of trust.