New England has a lot work to do before they head to Miami to face the Dolphins in two weeks. 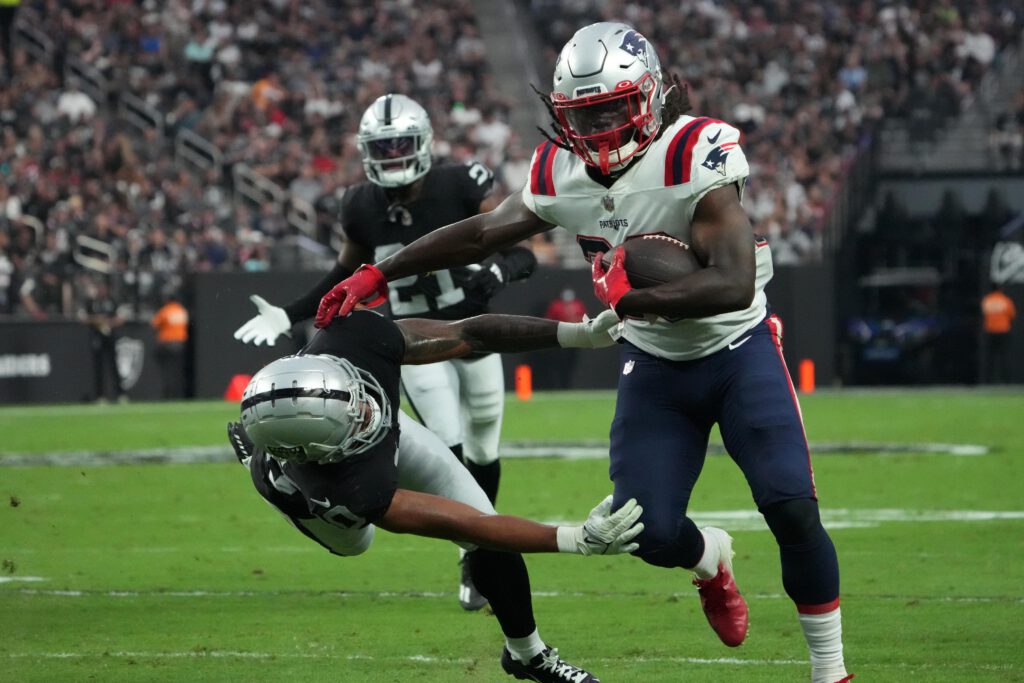 Well… that was certainly a preseason to forget.

The Raiders took down the Patriots 23-6 on Friday night, ending New England’s campaign at 1-2 and leaving them with far more questions than than answers as they wrap up camp.

Here’s an outline of the scoring drives from tonight’s game in Sin City:

5. Shaun Wade not playing in Vegas makes it tough to find room for him.

One of the most competitive position battles this preseason has been within the Patriots cornerback room. Jalen Mills, the 3 Jones’, Terrance Mitchell, Shaun Wade, and Myles Bryant all showed (in spurts) that they can play NFL football.

The caveat here is that Shaun Wade was out on Friday night after nursing an injury all week. I originally had the former Ohio State Buckeye on the roster, but his absence against the Raiders makes it tough to justify. Stay tuned for what I come up with on Sunday.

Ty Montgomery left Friday’s game against the Raiders with an apparent lower leg injury. He was carried off the field, carted into the locker room, and the early outlook is not good.

The journeyman RB/WR really started carving out a role for himself this preseason, but it’s looking like he might not be in the fold after said injury. New England will now have to rely on Damien Harris and Rhamondre Stevenson to be three-down backs – or trust that J.J. Taylor and Pierre Strong can do the trick.

3. Linebacker room clears itself up.

I think I finally know what to make of this Patriots linebacker room.

Bill Belichick raved about Jahlani Tavai last week and claimed that he’s going to play a part in this defense, but I think it was just a smokescreen. The linebacker was not good on Friday night, and the versatility of Mack Wilson on the inside is too valuable to get rid of with the type of defense they want to play this season.

Wilson in, Tavai out.

2. Lil’Jordan Humphrey will be a New England Patriot.

LJ Humphrey was quiet on Friday – which is exactly what he had to do to make this team.

The former Texas Longhorn had two-catches for 7 yards, catching both of his targets and making no mistakes in the outing. A team that is suddenly low on wide receivers, the Patriots are looking for reliable depth pieces – a role that Humphrey can play.

Tre Nixon has been a fan favorite, but he just didn’t pop enough for me over the last two weeks. I’m sure New England will be able to get Nixon on their practice squad again after cuts.

1. The Patriots are doing nothing to help Mac Jones’ growth.

By far the biggest takeaway of the night was the lack of production from the Patriots first team offense.

Mac Jones led (if you want to call it that) four drives on Friday night, resulting in an interception, two TOD’s, and a stalled drive that ended in a Nick Folk field goal.

The zone blocking scheme is not effective, Jones does not look comfortable behind his offensive line, and they are not consistent at all.

It’s hard to blame Jones – has nothing good going on around him. They have a lot of work to do on offense before the regular season starts on September 11th.

The Patriots have to get their roster down to 53-players prior to Tuesday and are just over two weeks away from their week one matchup in Miami. 98.5 The Sports Hub’s Alex Barth and I will have you covered Sunday morning at 10am on the Patriots Beat Podcast with our final roster projections. Tune in on Youtube channel, Patriots Press Pass!