New England falls to 1-3, but that's far from the story of their impressive showing at Lambeau Field. 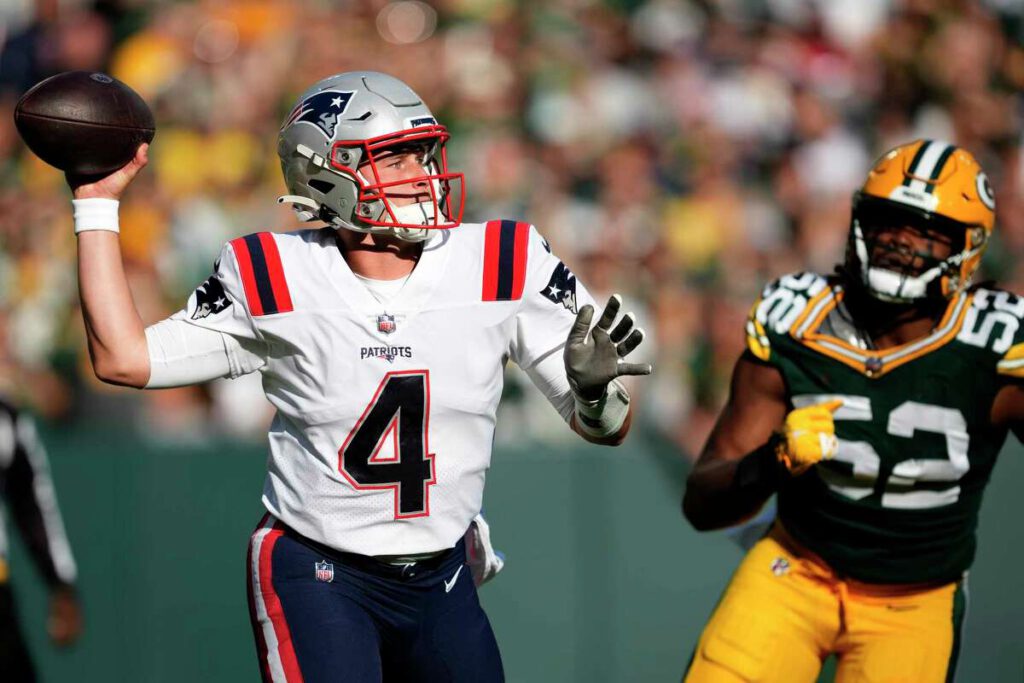 It’s hard to be upset about what the Patriots showed today at Lambeau Field.

Despite not getting the win – New England was able to go to Green Bay, with their third string rookie quarterback, and complete against Aaron Rodgers and the Packers for close to five quarters. The final score of 27 – 24 doesn’t nearly do this game justice. Here’s a look at the scoring drives:

Overall it was a heartbreaking loss for a Patriots team that now falls to 1-3 – but there was plenty to take away from today’s loss in Green Bay. Here are my five:

The Patriots have been known for their special teams unit for years, but in 2022 they’ve been very hit or miss. Here’s two examples from Sunday:

HIT: Marcus Jones was a beast in the return game today. In a game that came down to field position, the rookie averaged 30 yard per return on kickoffs and 29 yards per return on punts – getting New England great field position every time. He should be their #1 return man moving forward.

MISS: Specialist Brenden Schooler had a horse collar tackle that was called a penalty, that ultimately brought the Packers to midfield. For a team that keeps specialists around not make mistakes (Slater, Davis, etc.) , there’s simply been too many this year. They’ll need to clean it up if this unit wants to remain respected.

We all know about Mac Jones’ high ankle sprain that kept him out of week four’s game against the Packers – but adding insult to injury, backup QB Brian Hoyer left the game on the teams second drive with a head injury – and did not return.

That threw rookie Bailey Zappe into the fire – and it was a no-win situation for him from the get. The rookie held his own, going 10-15 for 99 yards and a TD pass to DeVante Parker, but it wasn’t enough to get the win this afternoon.

Bailey Zappe wasn’t the only rookie thrown into the fire on Sunday.

With Patriots CB1 Jalen Mills out with a hamstring injury, rookie cornerback out of Arizona State Jack Jones got the start – and boy was he electric.

Jones had five tackles, a pass deflection, forced and recovered a fumble, and had a 40-yard interception return off of Aaron Rodgers.

Quite the first start, kid.

It was by no means perfect, as there were still times where I found myself scratching my head wondering why Lil’Jordan Humphrey was on the field instead of Kendrick Bourne – but overall Patricia’s play calling kept them in this game today.

They went into a hostile environment in Green Bay, down to their third quarterback for the majority of the game, against one of the best quarterbacks in the NFL – and were able to compete for 60+ minutes.

The wheels fell off a little bit at the end, but all three phases of the game complimented each other really well on Sunday and with a healthy Mac Jones, the Patriots could have won this game today.

New England welcome’s the always fun Detroit Lions to Foxboro next weekend. We’ll have you covered here all week here on CLNSMedia.com leading up to the 1pm kickoff, and I’ll be live at Gillette for in-person coverage on Sunday. Keep it here for all of it!