An abundance of Patriots rookies showed plenty of promise on Thursday night - something that could bode well for New England's football future. 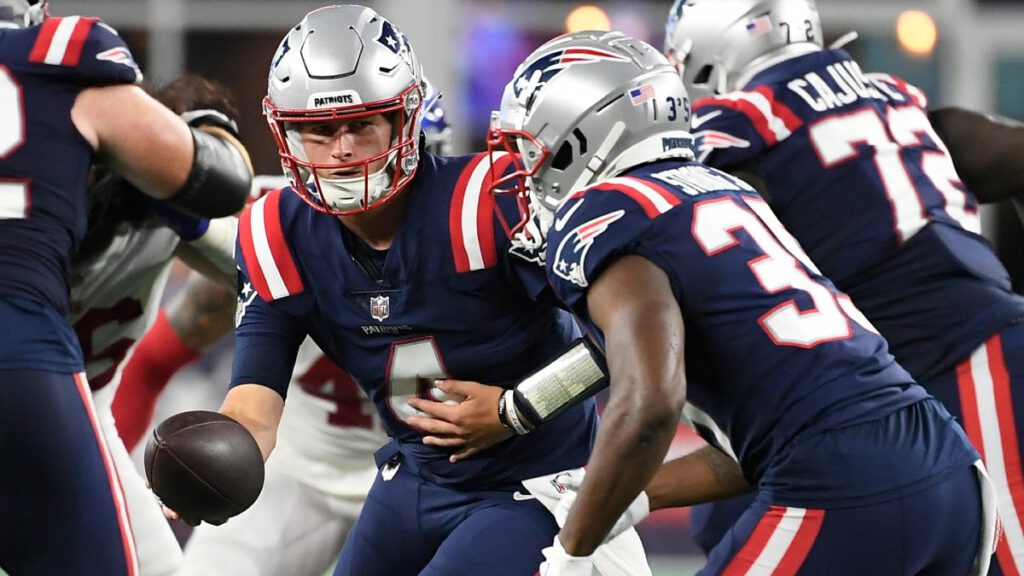 The Giants beat the Patriots 23-21 in their first preseason game of 2022 on Thursday night, but as you can probably guess, that’s far from the whole story.

New England put plenty of quality football on film that they can work on heading into the season. Several rookies impressed, their defensive backs showed promise, and Brian Hoyer might be looking for a job come September.

Here’s an outline of the scoring drives from the night:

Despite dropping to 0-1 in the preseason, the Patriots really impressed me tonight. It looked far better than their camp practices thus far. Here are my five takeaways from Thursday’s game:

5. The Patriots have speed at the linebacker position for the first time in a while

A much different look than last year, New England’s linebackers can actually move! Josh Uche was all over Daniel Jones, finishing the night with two tackles and a sack. If he was playing for a roster spot – he certainly earned it.

Mack Wilson, Raekwon McMillan, and Anfernee Jennings also showed their speed. It’s quite the changeup seeing second level defenders in a Patriots uniforms rally to the ball. It’s about time they adjusted some personnel to the modern NFL.

4. Offensive play-calling duties might still be up for grabs

It felt like a starter/backup type deal, allowing Judge to get a feel for the role and potentially win the job, but I’d expect Patricia to remain the de facto offensive coordinator to start the year.

The position I’ve been worried about the most during camp was the position that impressed me the most on Thursday night.

Jalen Mills, Jonathan Jones, and Marcus Jones didn’t play tonight, but everyone else did – and just about all of them making plus-plays.

Terrance Mitchell locked up Kenny Golladay on what would have been a touchdown, and he forced a fumble out of WR Collin Johnson. Malcolm Butler recovered the loose ball.

Shaun Wade and Jack Jones also made several plays from CB position. The competition is going to be an interesting one to see play out.

Though the Patriots second-round pick only had 2 catches for 9 yards on the night, Tyquan Thornton showed that he’s much more than just a stick figure versus the Giants.

The rookie scored his first NFL touchdown on a two-yard pass from Brian Hoyer, and also showed off some of his release package by beating CB Aaron Robinson on a go-route (which was unfortunately under thrown by Hoyer).

It’s sad to say, but the kid showed more than pretty much anything we saw from N’Keal Harry in New England – which is a win in itself. I’m excited to see #11 improve.

1. Rookies showed that they can make an impact early on

The Patriots rookie’s showed out tonight.

QB Bailey Zappe played three quarters for the Patriots on Thursday night, completing 19 of 32 passes for 205 yards, a touchdown and an INT. His touchdown was a beautiful seam pass to Lil’Jordan Humphrey, and he made several eye-popping throws to both Kristian Wilkerson and Tre Nixon. The kid showed he can play NFL ball.

First round pick Cole Strange got some run tonight as well. After the game, Strange was asked what he’s improved upon over the last two weeks of camp: “I guess in every way possible. Pass protection’s gotten better… we’ve been really working that.” It showed tonight.

Running back Kevin Harris scored his first NFL touchdown, a 2-yard run to cap off their first drive of the second half. Though he averaged a measly 1.5 YPC, he already got the TD monkey off of his back. He’ll improve against Carolina next week.

I already mentioned Jack Jones above, but he made ample plus-plays at corner tonight. I’m stoked to see how was the CB room has come in just a week and a half – and the Jones’ have been a major part of that.

Like I said, despite the loss, tonight was a good showing. There’s a lot to be happy about if you’re a Patriots fan.

Belichick gave the team the weekend off from practice, so they’ll be back at it next week. They’re on their own on Monday before two joint practices with the Carolina Panthers on Tuesday and Wednesday ahead of their game on Friday.