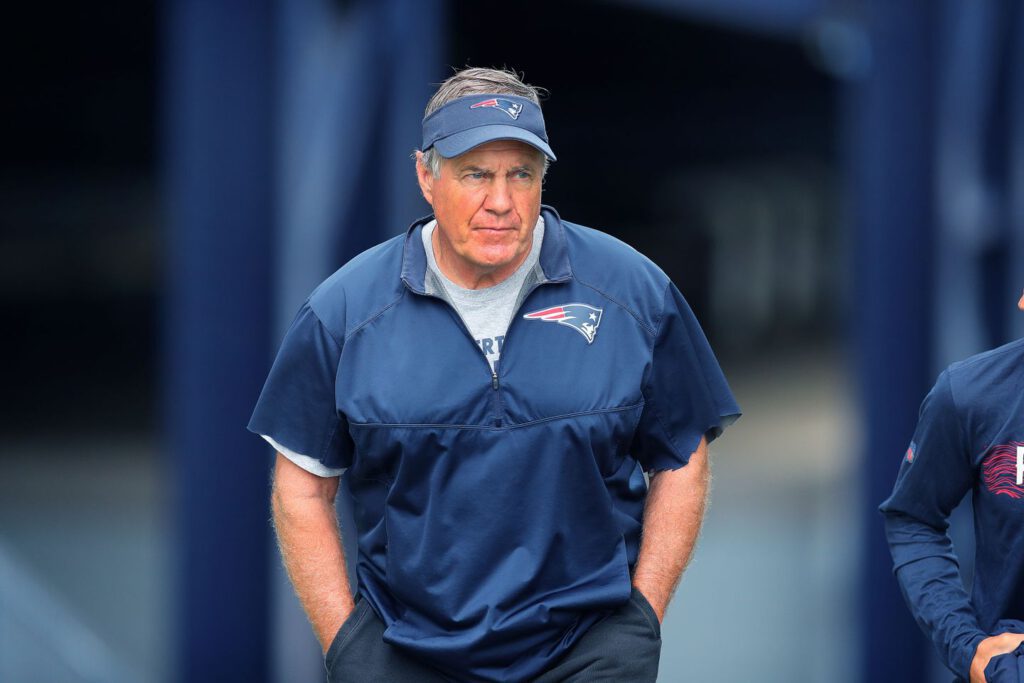 The Patriots began phase three of their offseason program on Monday as organized team activities get underway on the practice fields behind Gillette Stadium.

On Thursday, we in the media will be able to attend the practice session, which is the first phase of the offseason workout schedule that starts to resemble real football.

Although there’s no contact in these practices, the optional workouts do allow teams to pit the offense against the defense in seven-on-seven or 11-on-11 drills.

One overarching theme that should make for an exciting summer is the strong depth the Patriots accumulated on the 90-man roster, something that safety Duron Harmon pointed out about the defense during his media availability last week.

The Pats lead the league in players under contract that will earn at least one million dollars for the 2019 season with 43, according to cap expert Miguel Benzan (aka @PatsCap).

As a result, this is shaping up to be one of the most competitive training camps in recent memory with NFL talent well past the 53-man limit.

With that in mind, here are five storylines I’ll be monitoring during Thursday’s OTA session:

1. What’s Going On At Left Tackle?

The Patriots got some bad news with veteran Jared Veldheer informing the team he plans to retire after signing a one-year deal last week, according to ESPN’s Mike Reiss.

Veldheer likely had the inside track to a top backup role as a swing tackle with the Patriots and could’ve filled in at left tackle for 2018 first-round pick Isaiah Wynn.

On May 10, Pats offensive line coach Dante Scarnecchia told the media that the team is “penciling in” Wynn at left tackle for the upcoming season.

However, the legendary Scarnecchia also mentioned that Wynn, who’s still recovering from an Achilles tear last August, is not on the field yet despite making good progress in his rehab.

Fast-forward two weeks, and it seems unlikely that Wynn will be on the field this week.

Without Wynn, it’ll be interesting to see who lines up at left tackle with the rest of the starters along the offensive line, clueing us into the tackle depth chart.

Even though there’s no contact, starting guard Joe Thuney told me last week that these sessions are a good opportunity to build chemistry and practice hand techniques for the guys up front.

Tom Brady isn’t expected to attend OTAs sticking to his 2018 offseason schedule that turned out pretty well, but his newest target in rookie wideout N’Keal Harry will be on the field.

We shouldn’t expect to learn much about Harry’s role in the offense at this early stage, but there are a few things that we can take away from this week.

First, these offseason sessions are useful for roster locks like Harry to work on and hopefully improve some of the weaknesses of their game in a risk-free environment.

We’ll be able to see if Harry has refined his release package against press coverage as well as some of the other route running details that’ll do wonders for his game.

And second, it’ll be interesting to see if Harry can threaten NFL defensive backs with his speed and create downfield separation when he does take part in live action.

It’s important not to overreact to these sessions, but this is our first look at these rookies on an NFL field.

3. How Pretty Is Jarrett Stidham’s Spiral?

The newest quarterback in New England throws a ball that’s worth seeing in-person possessing one of the tightest spirals in this class and NFL-caliber arm strength.

From this perspective, Stidham is one of the most intriguing players to watch as the Patriots search for an heir to Tom Brady’s throne.

Despite uneven play in college, the Auburn product has all the physical tools to be successful.

The rookie has a chance to unseat incumbent backup Brian Hoyer making the veteran quarterback expendable and adding even more steam to the Stidham hype train.

If Stidham can stay above water, it’s not unheard of for the Patriots to enlist a rookie as their backup to Tom Brady after the team did so with Jimmy Garoppolo and Ryan Mallet in the past.

We’ll see just how pretty that ball is coming out of Stidham’s hand on Thursday.

For a more in-depth look at Stidham’s college tape, I wrote about the Pats rookie last month:

For the Patriots, it will take multiple players to fill the giant void left behind by Rob Gronkowski’s retirement; nobody on the current tight end depth chart should be expected to do it alone.

The Patriots paid veteran Benjamin Watson, who came out of retirement to rejoin the team that drafted him like he’ll see the highest percentage of snaps as the starting tight end.

But the Pats threw multiple darts at the position in free agency hoping that they’ll hit near the center of the target with at least one of Watson, Austin Seferian-Jenkins or Matt LaCosse.

With Gronk retired, the most likely possibility is that they’ll devalue the position altogether in the passing game and allocate those targets to the wide receivers, such as N’Keal Harry, and the running backs.

However, someone has to hold down the position, and Thursday’s session is our first look at a wide-open competition.

Sticking with a similar theme, many of the Patriots’ offseason acquisitions in free agency were of the boom or bust variety with no guarantee of a roster spot.

Along with Seferian-Jenkins, the most significant addition that meets that criteria is linebacker Jamie Collins.

Collins got more of a financial commitment from the team than Seferian-Jenkins, but the reunion begins this week, and we’ll see what the Patriots have in store for Collins and if he’ll buy into that role the second time around.

Along with Collins and Seferian-Jenkins, the Patriots signed several veteran free agents that have potential but will have to earn roster spots such as wide receiver Demaryius Thomas, wide receiver Dontrelle Inman, wide receiver Maurice Harris, and as previously mentioned, tight end Matt LaCosse.

Note: Thomas (injury) and Seferian-Jenkins (excused absence) are not expected to participate in OTAs this week.

We got a punter battle: almost-a-Super-Bowl-MVP Ryan Allen vs. fifth-round pick Jake Bailey.

Get your stopwatches ready. Enough said.