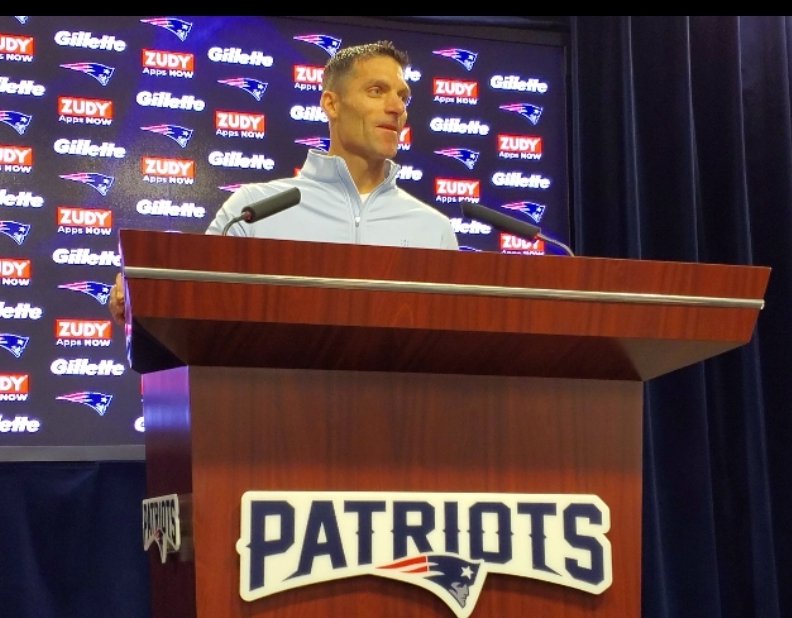 FOXBOROUGH – No, Nick Caserio did not step to the podium Saturday and announce his resignation from the Patriots.

The front that the Patriots director of personnel presented Saturday may be quite different than what he was thinking when he was denied the opportunity to speak with the Texans in the offseason about their general manager vacancy. But we’ll never know it publicly.

What he presented Saturday was a clear and present message about his attitude entering the final year of his contract with the Patriots. Nick Caserio, the loyal soldier.

“My job is really just to serve the people that are in this building and we’ve got a lot of great people. My focus is in trying to do the best that I can every day and be the best version of myself for this team and this organization and that’s what the focus is.”

“To serve the people.” No other phrase better captures Nick Caserio, the loyal soldier.

The Globe’s Ben Volin prodded, but to no avail.

“I love being here, and right now we’re focused on trying to get the team ready for this season,” Caserio said when reminded that the Patriots have twice prevented Caserio from interviewing for a GM job outside of the Patriots. “I’m happy to be here and I love what I do on a day-to-day basis.”

Whether or not he truly wanted the chance to interview with the Bob McNair’s widow Janice and son Cal and old pal and Texans head coach Bill O’Brien is not the point right now. He knows full well that he’ll have that chance in due course.

If he’s going to be inside the walls of Gillette Stadium working for Robert Kraft, Jonathan Kraft and Bill Belichick, he’s got to have focus. And on Saturday, during his 15-minute availability with reporters in the media work room, that’s what he showed – a focus on the job at hand.

“I’m not really focused on the hypotheticals,” Caserio told the Herald’s Karen Guregian when asked if he’d like to be an NFL GM one day. “I’m focused on today, and honestly I’m focused on trying to be the best version of myself each and every day. Honestly, it’s more important for me – I mean, you guys see me after practice – to try and be the best husband, the best father to my kids. I get more joy out of that than anything else.

“Ultimately, that’s going to matter more than anything else. I’m blessed to be here. I enjoy every day. Each day is a new opportunity to try and improve and get better, and that’s what I’m focused on trying to do.”

There’s an assumption that Caserio wants to move on from New England. I reminded him of the fact that the Patriots are the only NFL organization he’s known since he began as an assistant to Belichick’s football operations in 2001, the dawn of the dynasty.

What makes this organization so unique from his perspective?

“Well, I think number one, it starts with people, right? We’ve got a lot of great people that we’ve had in this building for a long time,” Caserio told me. “I think everybody understands the expectations of what’s expected of them on a day-to-day basis and we’re all here to help and serve one another, and the one thing about the NFL which we know – change is constant, right? The only thing that’s consistent in the NFL is change.

“What we try to do is really start from scratch each year and try to establish our level of performance on a day-to-day basis. I think the most important thing – and I’ve been blessed and fortunate to work with a lot of great people in a lot of different areas – whether that’s on the coaching staff, whether it’s on the personnel side, on the scouting side or with the players. It starts with the people, and we’ve been blessed and fortunate to have a lot of great people.”

Of course, there are great people scattered throughout the NFL and if he were to move onto another team, surely there would be highly intelligent and qualified people he would either bring on board or keep on staff from the previous regime.

The point is that Caserio is in a situation where, like Belichick, he knows his staff back and forth and knows what they’re capable of with a football foundation so solid that multiple proverbial hurricanes haven’t dented it in the past 20 years.

Now, there were quirks Saturday that certainly stood out. Like when he opened his press conference and announced that Sony Michel would return to practice on Saturday, or that Michael Bennett is away from the team for personal reasons or that David Andrews would be back on the field. Those are details that Bill Belichick would entrust to the eyes of the reporters to relate to the fans on their own, not through public announcement.

Caserio didn’t indicate anything but giving his all to the Patriots on Saturday, at least for one more year. What else would you expect from a good soldier?