Evans could help free up Joe Mixon, Ja'Marr Chase and Tee Higgins against Ravens defense on the road. 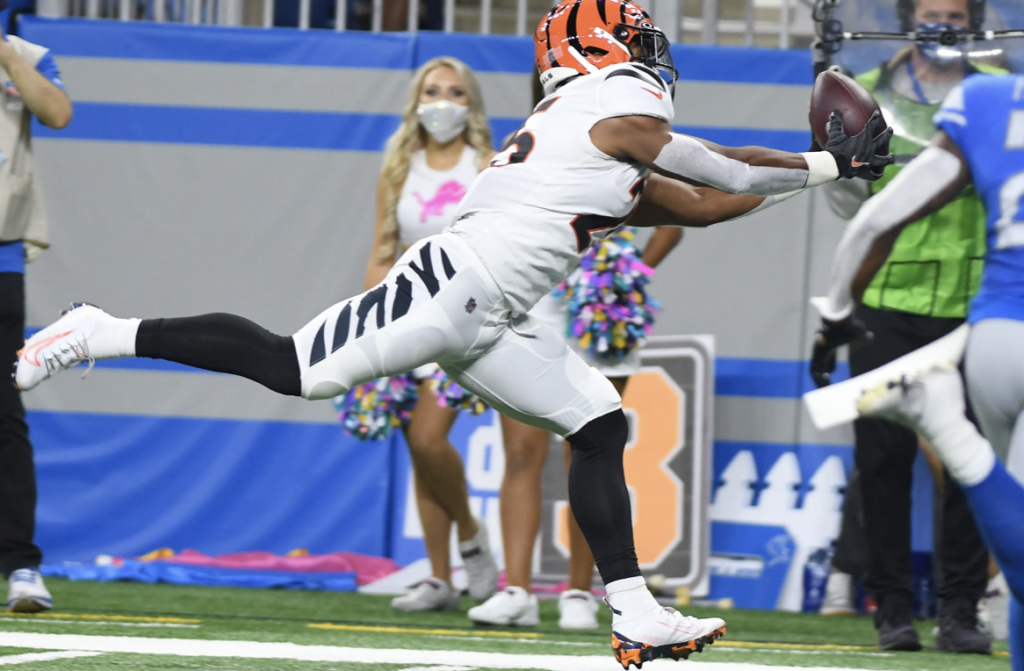 CINCINNATI – The Bengals offense should be ready to take that next step and rookie Chris Evans is likely going to be at the center of that movement.

The rookie out of Michigan showed Sunday in Detroit that he could be an invaluable piece of what the Bengals hope is a more dynamic offense moving forward. That progress absolutely needs to continue this weekend in Baltimore if the Bengals are to maintain their position as early-season contenders in the AFC North.

Last year’s two games with the Ravens actually did the Bengals a huge favor. It highlighted just how far they needed to go to improve an offense that was far too predictable. The Bengals didn’t score a touchdown in eight quarters and were outscored, 65-6. That’s the worst divisional domination Cincinnati has suffered in any season in their 54-year history.

The comparison between Evans and Gio Bernard has been made often in last several days since his strong performance against the Lions. Bernard was one of those difference makers in games against the Ravens. He was back that was difficult to cover with a linebacker and the Bengals knew it.

In 14 career games against the Ravens, he was targeted 63 times with 44 catches. He had 112 carries in those 14 games. What Bernard did was draw attention so that Andy Dalton could find A.J. Green and Mohamed Sanu and Tyler Eifert. He was also incredibly reliable as a pass blocker.

A catch to remember for @Kidnplay_abc123!

The question becomes when are the best downs to use Evans? The obvious situations come on third down. But putting Evans and Mixon on the field at the same time could force Baltimore’s defense to choose between the two and give Burrow more one-on-one matchups on first and second down. This is where the Bengals will need to be creative to answer one of the more creative defensive coordinators in the game.

Everyone can see the impact Ja’Marr Chase has had in upgrading the deep threat potential of the offense, to the point where the point has been suggested that Joe Burrow is relying too heavily on Chase and ignoring the rest of the offense.

Not buying that theory for a second, and neither is Bengals offensive coordinator Brian Callahan. If relying too heavily on your best receiver means five touchdowns by the rookie in his first six games, then give me that every day of the week.

“Good receivers always make quarterbacks better,” Callahan said. “That’s just the way it goes. But Ja’Marr makes him better because they are on the same page with everything. And, Joe does a great job clicking with all the receivers, but you can just see that they’ve got years of service together and it shows. Ja’Marr is always where he expects him to be. Joe knows how to throw it to him.

“Their connection is obvious. And he’s explosive and he wins and so there’s a lot of trust there, and Joe trusts him to do his job all the time. And he lets balls go early, he lets balls go in the spots where he knows only Ja’Marr can get it and he knows what those locations are. Anytime you do have that kind of a rapport with the receiver it’s going to make you a much better player and it makes you a better coach, it makes you a better team and all those things go together, but I think the biggest thing is that they’re just on the same page all the time.”

Production is production. After eight quarters without a touchdown against the same divisional opponent, the Bengals need to find a way against Ravens defensive coordinator Don Martindale.

“We categorize a lot of things by family of the defense and systems of defense we face, and you see a lot of different ones, and ones that are really good and things that give you headaches to prepare for and then there’s Baltimore and they live in their own category,” Bengals offensive coordinator Brian Callahan said. “They do so many things and they do it well and they have a counter to everything they do, so you can’t just dial in on one thing. Things come up by game, by team, so you don’t necessarily see the same thing twice in a game plan package for them. I think Wink is one of the best defensive coordinators in football. I am surprised Wink is not a head coach the way he runs that defense.

“And he’s one of the guys I have as much respect for as anyone in this league as a coordinator, and it’s going to be a lot of long nights here for the next three or four days and trying to get our guys in the best position to have success, but it’s no easy task and they do a fine job of making life hard on you schematically and then they got good players on top of it. You’ve still got to go block those players and win against those corners and do all the things you’ve got to do just normally, and they’ve got all those wrinkles on top of it so we certainly have a huge challenge ahead of us. They are as good of a defense as we are going to face all year, and we get the privilege of playing them twice.”

Which brings us back to the running backs. The Bengals’ best running back is clearly Joe Mixon. He’s averaging a solid 4.3 yards every time he carries the ball. He’s toted the rock 111 times with a modest three touchdowns. The next highest is Samaje Perine with 20 carries.

Evans has just four, all coming last weekend in Detroit. His role needs to increase, and likely will after what he showed against the Lions. He is precisely what the Bengals need right now. He’s the change-of-pace back that can give Mixon a breather, can most certainly catch the ball and, as he showed on Sunday, is totally capable of picking up the pass rush to provide Burrow that extra second to get a pass off downfield.

Evans has shown the Bengals coaching staff that he’s willing to put in the work to learn how to pass protect.

Which brings us to this week in Baltimore. Callahan knows Martindale isn’t going to make things easy on Evans if he’s in there just because he’s a rookie. Actually, just the opposite.

“They make everything look the same. They have a lot of different packages, a lot of different alignments. It feels like there’s people all over the place. So, you have to calm your eyes down. You have to be very detailed in your approach during the week of understanding what the protection plan is, understanding what it is you’re being asked to do, what the looks are that you’ll see as a back, who are the blitzers, where they’re coming (from), what helps tip off the pressures? And then the plan for whatever you’re going to see.

“Because they’re going to show us something we haven’t seen. They’ll have a package for us that is new, that’s not on tape. That’s just the way they operate. So you gotta be great with your discipline and your rules when you go against these guys. That’s probably the biggest thing. You can’t give up an easy mistake on a rule that we’ve repped a hundred times. You can’t just panic because it looks different than what you thought. You just gotta stay calm and stay with your progression and your eye discipline.”

What are the Patriots going to do at Wide Receiver?