For Bruins, Kuraly line turning back into most crucial line 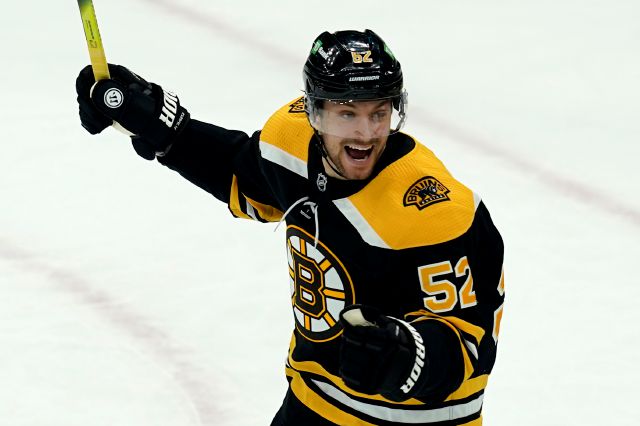 Both came in the first period on Thursday night. Both set the tone in Boston’s 4-1 win over the Penguins.

Roughly six minutes into the contest, Sean Kuraly, Chris Wagner and Anders Bjork had the Penguins line of Sidney Crosby, Jake Guentzel and Bryan Rust hemmed in their own zone.

In an almost 30-second stretch, Kuraly worked the puck along the wall, protecting it from defenders. Bjork supported the play, racing around and covering for Matt Grzelcyk retrieving a rebound down low. Wagner played as the third-guy-high, ultimately scoring a right place, right time one-timer past Penguins goalie Tristan Jarry.

“I thought [Wagner] has been real close to scoring the past few games,” Bruins head coach Bruce Cassidy said after the game. “Had some tough luck around the net, so [the fourth line] is starting to generate a little more and feed off each other.”

That was only play No. 1. There was still one more impactful play to go and it centered around Bjork. Actually, it was pretty much all Bjork.

Before we dive into the play, it’s important to note how Bjork’s season began. The newly signed left winger entered Thursday’s tilt with 0 points in six games. Since the first game against New Jersey, Bjork has made a quick descent down the lineup from skating alongside Patrice Bergeron and Brad Marchand to staying in the Bruins rotation due to other injuries.

Alright, now back to the play.

Bjork got the puck in the neutral zone and entered Pittsburgh’s end, motoring past Chad Ruhwedel and around the net. As he skated, no options appeared to be open, so he kept skating to the top of the zone and fired one towards the net. The shot got blocked and Grzelcyk chased after it into the corner.

Anders Bjork literally did *everything* in this shift to lead to Sean Kuraly’s goal: pic.twitter.com/YInOlkwIex

Here’s where Bjork made the notable play.

The puck went back to him at the point, as he was covering for Grzelcyk. He then made an inside-out move on Brandon Tanev, skated down and fluttered the puck to the front of the net where it bounced off Kuraly’s skate and past Jarry.

Just how they drew it up.

“I was happy for them,” Cassidy said of his fourth line. “They’re well-liked in the room. When those guys score, it always lifts the bench.”

Entering this season, Cassidy’s hope was for Kuraly, Wagner and whomever skated on the left side to return to form — to be that shutdown line that once played well enough to will the Bruins to the Stanley Cup Final in 2019. That fourth line didn’t perform as well in the 2019-20 season, especially when it came to facing the Lightning in the postseason.

Kuraly’s crew has lived up to those expectations thus far, most notably Thursday night.

In 7:40 of 5v5 time against Evgeni Malkin, flanked by Jason Zucker and Kasperi Kapanen, Kuraly, Wagner and Bjork held the line to a Corsi For percentage of 47.62, which was good for lowest out of all four of Pittsburgh’s forward trios. Malkin’s group’s expected Goals For percentage was also lowest at 30.34. They never registered a high-danger chance.

“They’re typically against a good line,” Cassidy said of his fourth line. “If they don’t have it one night or they get behind, then you’ve got to put some offensive guys in those situations…Those guys have to do a lot of the dirty work. D-zone starts, penalty kill — some of that stuff doesn’t show up on the scoresheet. Always playing against good players. I think they’re doing a good job.

“They’re doing their part. Nice to see them get on the scoresheet.”

Kuraly, Wagner and Bjork spent much of Thursday morning with B’s assistant coach Jay Pandolfo going over film. The results of the small session were evident on the Garden ice Thursday night.

“I think that always helps,” Cassidy said of the group meeting. “To see themselves in the small group, talk about what they liked and have the coach there to systemically remind them how to do it.”

What the fourth line went over in the meeting probably wasn’t glamorous. Instead of figuring out better ways to out-skill the opponent, it was most likely centered around their job of shutting down the opposition in the defensive zone, forechecking hard and killing penalties.

One person who certainly appreciates all of those attributes is Brad Marchand, who began his career doing those same things.

“They play a lot of difficult minutes in the d-zone and important draws and penalty kills and stuff like that and sometimes it doesn’t get the same recognition,” he said. “But they’ve been a huge part of our team. It’s why we’ve been successful for a lot of years now. It’s great to see because they’re all great guys and they have the ability to play all the way through the lineup.

“It’s just great to have those guys have success and again, that’s why we’re a good team.”