For Patriots, Finding the Texans’ Pass Rushers Nearly as Difficult as Blocking Them 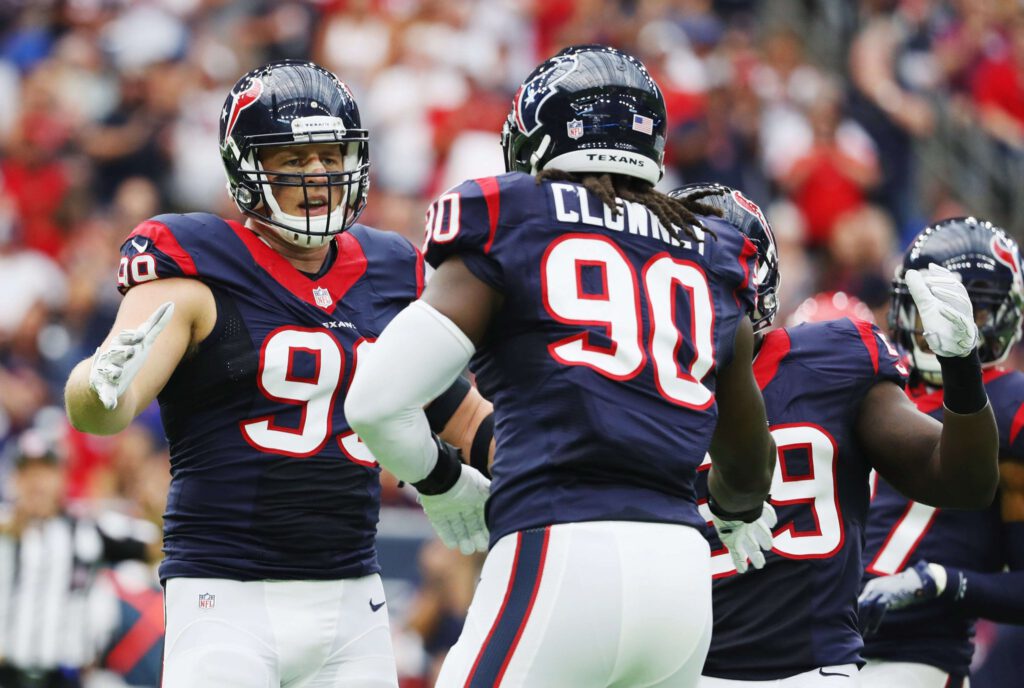 As the Patriots prepare for the Houston Texans on Sunday, slowing down the vaunted Houston pass rush will be priority number one for New England on offense.

Although blocking the three-headed monster of J.J. Watt, Jadeveon Clowney and Whitney Mercilus is a mountainous task; identifying where they are on any given play is just as important as the physical aspects.

That’s because the Texans, and defensive coordinator Romeo Crennel, love to move the three pass rushers around the defensive front like chess pieces.

And as Bill Belichick put it during his conference call on Monday, Crennel is one of the best in the game at doing so:

“Nobody’s better than Romeo in running a defense and creating problems for the offense and utilizing his personnel…To be able to not only handle the players where they traditionally line up but when he creates schemes that moves them or puts them in places to attack our offense, that makes it even a little bit more challenging.”

Belichick would go on to say that recognizing where the Texans’ stars are on any given play will be a massive challenge for the Patriots this week:

“Sometimes finding them or identifying where they are is a little bit of a problem – not that you can’t find a guy, but depending on what you have called and where he’s located, then that might change what your anticipated matchup on the play is and then what it really is could be two different things, and they do a good job of creating problems on that.”

Starting with 2017 Pro Bowler Jadeveon Clowney, the former number one overall pick lined up in 15 different spots for the Texans last season, including twice at nose tackle, according to Pro Football Focus.

His running mate at linebacker, Whitney Mercilus, in an injury-shortened season he still moved around to 11 different spots.

And finally, there’s Watt, who also played at 11 different positions in his last fully healthy season in 2015, and even took a few snaps at tight end.

Now all three have their preferred positions; Clowney and Mercilus at outside linebacker while Watt man’s the left defensive end or LEO position, which is typically a designated pass rusher role.

But finding the trio each snap turns into a game of “Where’s Waldo” for the offense.

Patriots center David Andrews is well aware of the problems the Texans front present for the Pats’ offensive line this week and said it will take a group effort to identify, and block, Houston’s front.

“I don’t think it falls on one person,” Andrews said. “ We can’t sit there and give a dissertation of where people are. I think as an offensive line we do a good job of all being on the same page.”

Both Andrews and tight end Rob Gronkowski echoed the same sentiment noting that the Texans have multiple pass rushers that cause problems, and you can’t just pick out one.

When asked about knowing where the Houston pass rushers are on the field, Gronkowski said, “it’s super important, but I mean, they’ve got a lot of good pass rushers on this team. So you can’t really be too focused on one.”

Last season, Patriots quarterback Tom Brady was pressured on 15 of his 41 drop-backs (36.5 percent) and sacked five times by the Texans in their Week 3 matchup.

On average, the Pats quarterback was pressured on 31.1 percent of his drop-backs last season and sacked only 2.4 times per game.

For the Patriots,  Andrews points to preparation as the key to slowing down Houston’s defense, an unsurprising sentiment coming from one of Bill Belichick’s players.

“I think it’s just communication back and forth. You all just have to be on the same page, and that’s practice, walkthroughs, meetings and all that stuff.”

For the most in depth and comprehensive player and game analysis check out Patriots All-22 with host and Patriots Beat reporter Evan Lazar. Listen and Subscribe HERE