Spain, Bengals line need to show their nasty side so Joe Burrow can keep up with Aaron Rodgers. 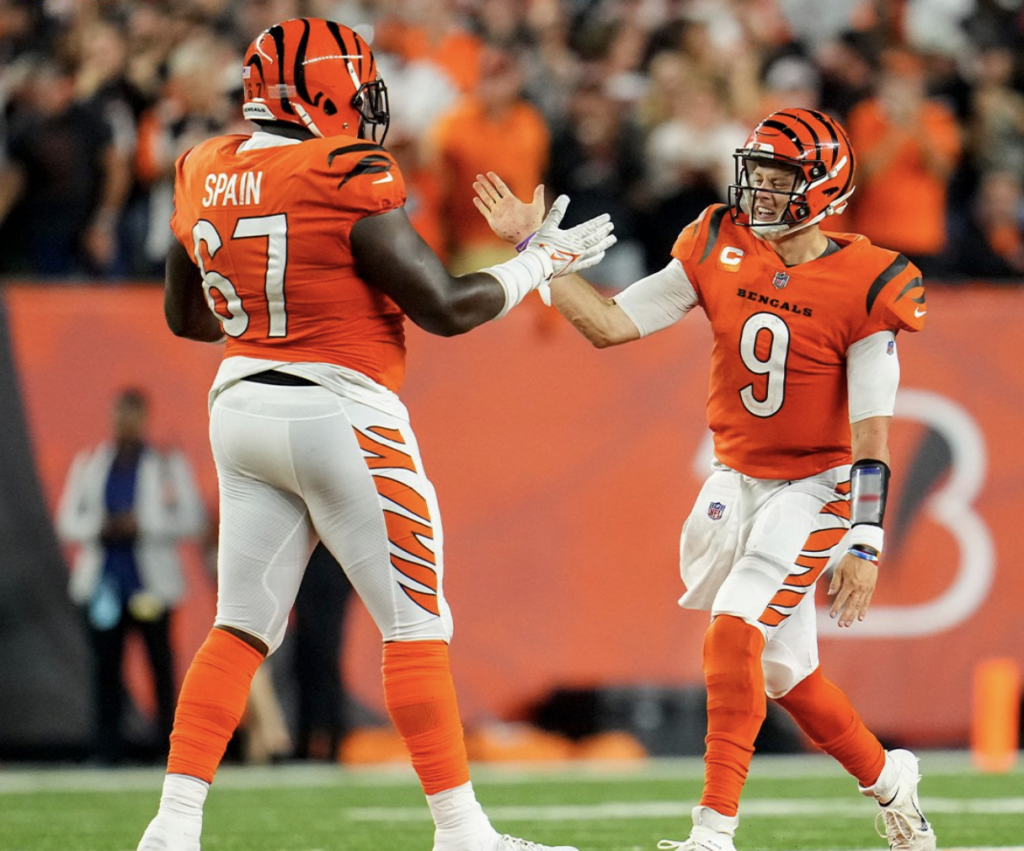 CINCINNATI – Quinton Spain stands 6-foot-4, weighs 330 pounds and is the starting left guard for the Cincinnati Bengals. He came to Cincinnati last season before the Tennessee game – on the Friday before – and was able to jump in and play effectively in Joe Burrow’s second win as an NFL quarterback.

The Bengals knew then they had a beast of a man on their offensive line. In that game, Spain came in as a substitute and was able to show his massive impact as a people mover.

As he has shown this season as Cincinnati’s starting left guard, he’s big, quick, agile and powerful on the offensive line.

Turns out, his stature is much bigger in the Bengals locker room.

“The word you didn’t mention, he’s probably our nastiest guy,” Bengals offensive line coach Frank Pollack told me. “He’s the most physical guy in the room. He’s heavy-handed. He puts those hands on you and he’s going to stone guys with one or two hands. It’s crazy. He’s a veteran, he’s played a lot of football.”

Indeed, the seven-year veteran out of West Virginia made his debut in 2015 with the Tennessee Titans as an undrafted free agent. He quickly earned a spot on an offensive line in need of his massive presence.

The Bills signed him in 2019 to a one-year exploratory deal. Turned out, what the Bills discovered was a pretty good guard. He didn’t allow a single sack and was offered a reward of a three-year, $15 million deal in March 2020.

But a funny thing happened early on in the season last year. He fell out of favor with the Bills and Cody Ford and Brian Winters passed him by on the depth chart. He was released on Oct. 21, 2020. Nine days later, the Bengals gladly picked him up. Two days later, he was playing against his first NFL team.

“He’s extremely bright. He’s got great awareness, does a great job communicating out to Jonah,” Pollack said of his place next to left tackle Jonah Williams. “He’s the veteran in the room that asks the questions he knows the answer to. He’s really wanting me to expand on it for the rest of the room. I love veterans like that. He’s that guy in the room. He’s a lot of fun to coach.”

ALL TIED UP (with a nice #BudLightCelly BTW)

“I coach the O-line, got to stay focused on what I call the master of the mundane, the boring stuff that wins in this league,” Pollack said. “If somebody flinches or makes a mistake because you are executing the boring, mundane stuff you make a difference. You hit a big run or pop a big pass. Executing ball plays.”

Pollack loves Spain’s intensity because he realizes he’ll help make sure everyone is awake on the assembly line of NFL offensive line protection and blocking.

“It’s the assembly line worker not falling asleep at that one-thousandth beer bottle you are supposed to cap that Laverne and Shirley over there, you are getting sleepy, and it goes by you. You can’t miss that. You did 1,000 right but its 1,001 that made a difference. It’s that kind of a mindset. It takes someone who is mentally tough enough to be able to grind through that. That’s something I always harp on and always remind guys and keep that focus and take that approach.”

How perfect that Pollack used a metaphor from an iconic Wisconsin-based 70s sitcom as his team gets ready for the Green Bay Packers.

Quinton Spain will be leading the way this week making sure all assignments are covered properly heading into Sunday, so that Joe Burrow and the Bengals can celebrate appropriately after the game.