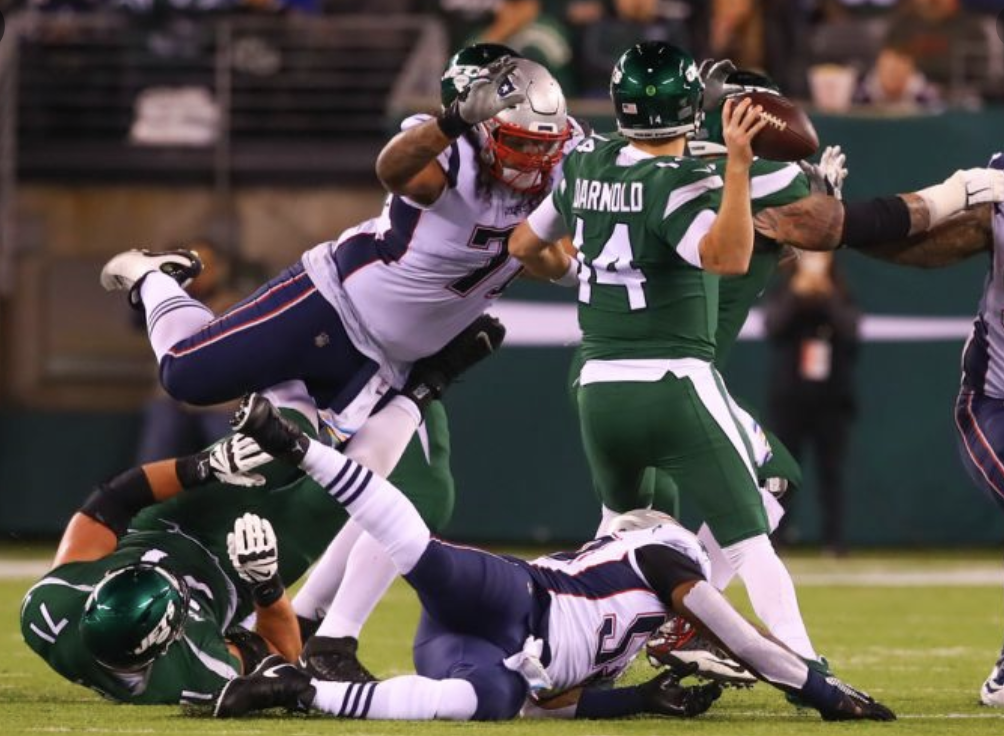 Coming off wins against the Redskins and Giants in which they struggled in the first half, New England raced out to a 17-0 lead in the first quarter and 24-0 at the half en route to a 33-0 rout of the New York Jets to improve to a perfect 7-0. Sony Michel ran for three touchdowns as New England remains a game and a half ahead of the 5-1 Bills in the AFC East. Michel matched a career high, running for three scores in the AFC Divisional win over the Chargers last January.

Despite playing without receiver Josh Gordon and tight ends Matt LaCosse and Ryan Izzo, the Patriots and Tom Brady came out on fire to start the game. He completed 8-of-9 passes for 55 yards on the first drive and was 13-of-17 in the first quarter for 118 yards.

Even with the return of first-round pick Quinnen Williams, linebacker C.J. Mosley and quarterback Sam Darnold, the Pats had no trouble getting out to a fast start in the first quarter. All three players did not see the field in New England’s 30-14 win at Gillette Stadium in Week 3, a game in which Jarrett Stidham threw a pick-6 and Gunner Olszewski muffed a punt near the goal line for New York’s only two scores.

The Patriots defense has yielded just 27 points in seven games so far in 2019. The record for a full 16-game season is 141 points by the 2000 Baltimore Ravens, who won Super Bowl XXXV against the Giants.

The Patriots put on a clinic in the opening 15 minutes, outclassing the Jets in every facet of the game.

The Jets won the toss but deferred giving the Patriots the ball to start the game. That was New York’s first bad decision of the night. The Patriots were machine-like in their march down the field, putting together a season-long 16-play drive that concluded with Sony Michel’s 3-yard run.

After an early drop by Ben Watson in his first target, Watson caught a 10-yard pass over the middle to set the Patriots up at the Jets 11. Three plays later, Michel put the Patriots up, 7-0.

Devin McCourty picked off Darnold on New York’s first drive of the game, a drive that began at the Jets 8. The Patriots didn’t do a good job of capitalizing, losing five yards in three plays and settling for a Mike Nugent 34-yard field goal for a 10-0 lead.

The Patriots forced a three-and-out, thanks to a bad drop by Demaryius Thomas. Tom Brady capped a 7-play, 67-yard drive with a 26-yard perfectly placed high-arching pass to Phillip Dorsett in the right back of the end zone over Trumaine Johnson for a 17-0 lead with :09 left in the first quarter. The Patriots had nine first downs and 141 yards while the Jets ran only six plays, gaining 14 yards.

Jermaine Eluemunor and James Ferentz reported as eligible and Sony Michel ran it in from one yard for his second touchdown of the night and a 24-0 lead. That scoring drive was set up by a strip sack by John Simon and a recovery by Kyle Van Noy.

With the Patriots dressing Ben Watson and Eric Tomlinson as their only tight ends, Elandon Roberts was featured a fullback in their goal line package in the second quarter.

The Jets, with the help of three penalties against the Patriots defense, were set up to score before the half. But Darnold, under pressure, heaved a pass toward the goal line and it was picked off by a leaping Duron Harmon.

A bad snap by Jets center Ryan Kalil sailed over Darnold’s head and the quarterback batted it through the end zone as the Patriots increased their lead to 26-0.

The Jets appeared to be on the verge of breaking up the shutout when Trumaine Johnson intercepted Tom Brady after Leonard Williams got to the Patriots quarterback on a pressure. The Jets took over at the Patriots 33. A pass interference call on J.C. Jackson put the Jets at the Patriots 11. But on second down, Darnold forced a pass into the end zone and it was picked off by Terrence Brooks for New England’s fourth interception of the night.

The game turned into a joke in the fourth quarter when New England attempted to punt in Jets territory. After a false start and delay of game by the Patriots, both declined by the Jets, Bill Belichick was caught smirking on the sideline as the Jets refused to allow the Patriots the advantage.

With Brady, Brady, Brady chants reverberating around MetLife Stadium, Brady stayed in till the next-to-last drive. After a Braxton Berrios muffed punt with under three minutes left, Jarrett Stidham came on to replace Brady.

The 7-0 Patriots will now get ready for Baker Mayfield and the Browns this Sunday at Gillette Stadium on a short week while the Browns come to New England off a bye.