Getting Physical: This Bengals Defense Ready To Lead The Rush In 2021 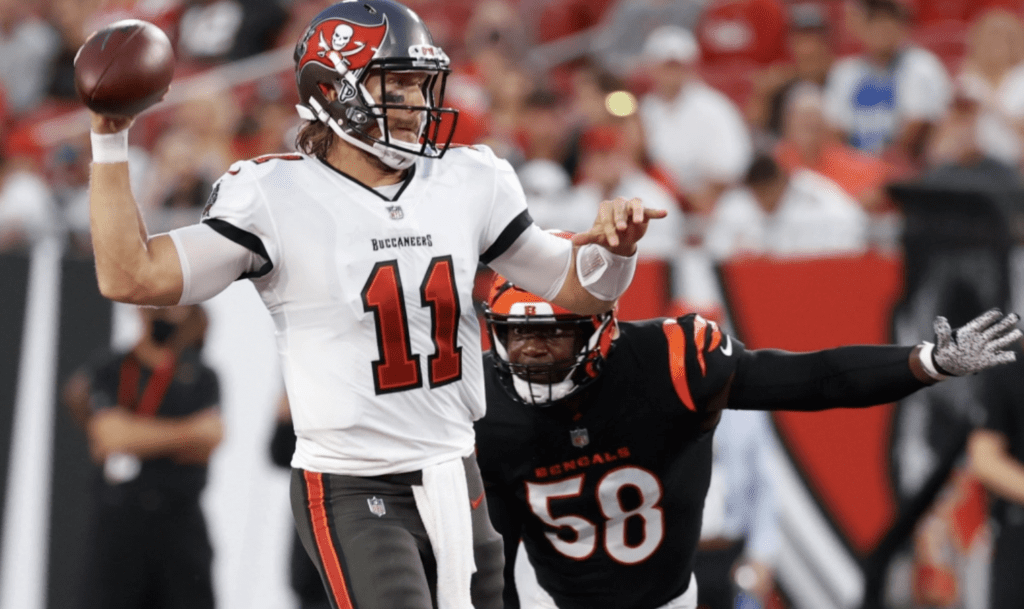 CINCINNATI — Anyone who has watched the Bengals closely over Zac Taylor’s first two seasons realize that the Bengals had many deficiencies but most prominent among the group was the inability of his defense to create turnovers and get off the field on third down.

This comes down to two things, poor tackling and the inability to create pressure that leads to quarterbacks making decisions before they want to pull the trigger.

If you watch one thing in preseason games on television, watch how players tackle. It’s something that can’t really be honed in on, even with pads on during practice.

But it is something that defensive coordinator Lou Anarumo can start to evaluate in game situations and it’s something he felt good about after watching the film of Saturday’s win over Tampa Bay.

“We don’t do a lot of tackling in camp anymore,” Anarumo told me Tuesday. “That’s not the way the league is set up. Generally speaking the tackling is not great early in preseason. By the end of it, it’s usually better and by the end of it you hope you are cooking on all cylinders.

“I thought we tackled well for the first game. We had some later in the game that was not great angles to the ball. We do do circuits like we do in turnovers, our takeaway circuits. They took that, the practice stuff, and did well during the game. I was pleased.”

But perhaps most of all, Anarumo saw an attitude to his defense that hasn’t been there in his first two seasons.

Right out of the gate, there was Vonn Bell coming off engagement on the interior and flying all the way outside of the numbers to take down Leonard Fournette for one yard. Next play, Germaine Pratt shot the A gap for another 1-yard containment of Fournette. In both cases, Anarumo saw his first unit take great angles, pursue and take down the carrier.

“I think we’ve said to them, to the players: Physicality, physicality, and physicality. And it started I think, again, it’s one game, but the 29-yards (total) rushing,” Anarumo said of the run defense. “The first play of the game Vonn tackles Leonard Fournette in the flat, no gain, and I just think that showed up. And that has to be the standard as we go forward.

There’s been so much focus on the offense in camp, and where the offensive line and receiving corps stands with Joe Burrow, that the biggest weapon may well be the defensive unit as a whole. This is a unit that had an NFL-low 17 sacks in 2020.

The 17 takeaways were tied with Jacksonville for fifth-fewest in the NFL.

These two stats have to change and everyone in stripes knows it.

That was before Gio Bernard got underneath the linebackers and caught a pass from Tom Brady for a third down conversion. But that would be the only third down the first unit facing Brady would allow as the team got off the field thanks to the Joseph Ossai sack on the next third down try. The Bucs did convert 5-of-5 on third down on their next drive, their only TD drive of the game. But that was against a second unit getting its first game reps of the preseason.

“We are still feeling all that out,” Anarumo said. “Put guys in different spots. This is the time to do it. You didn’t have this last year. We are kind of feeling this guy might be better here or there. We are going to keep moving guys around all preseason just to see what they are best at.”

Before he got hurt, Ossai played 33 snaps and looked as good as he has in camp, playing with controlled aggression.

“He did well. Joe showed what he’s shown out on the practice field,” Anarumo said. “He was aggressive, he was relentless in his effort and he has a knack for getting to the quarterback so it was good to see.”

In addition to Ossai, rookie fourth-rounder Cam Sample played 49 of 62 defensive snaps and looked comfortable, considering he was getting his first game action against Tom Brady.

“He played solid. For a young guy in his first game a lot of things he needs to improve on,” Anarumo noted. “He showed some edge pressure. He also was inside some. His first snap probably didn’t go the way he wanted it to against their ones. He got better as the game went along.

“He had his hand in his dirt and looked up and there was the greatest quarterback to ever play our game across from him, so he told me that was a little moment for him, is what he said.”

This defensive unit that has had incredible difficulty getting to the quarterback in the last two seasons also showed the ability to play together at all three levels.

“It’s imperative,” Anarumo said. “Again, we had a tight game plan. The idea the whole preseason is go play, not so much game planning the opponent, just give them our base calls and let them go play. But there’s communication from the back end to the linebackers to the front, and they always have to be intertwined.

“We always tell them, ‘If we’re all wrong, we’re all right.” Even if they say something, as long as we all do it, it may not be exactly what we wanted, but as long as they’re all on the same page, so it’s critical to success.”