Getting to Know Quarterback Derek Anderson and the Bills Offense 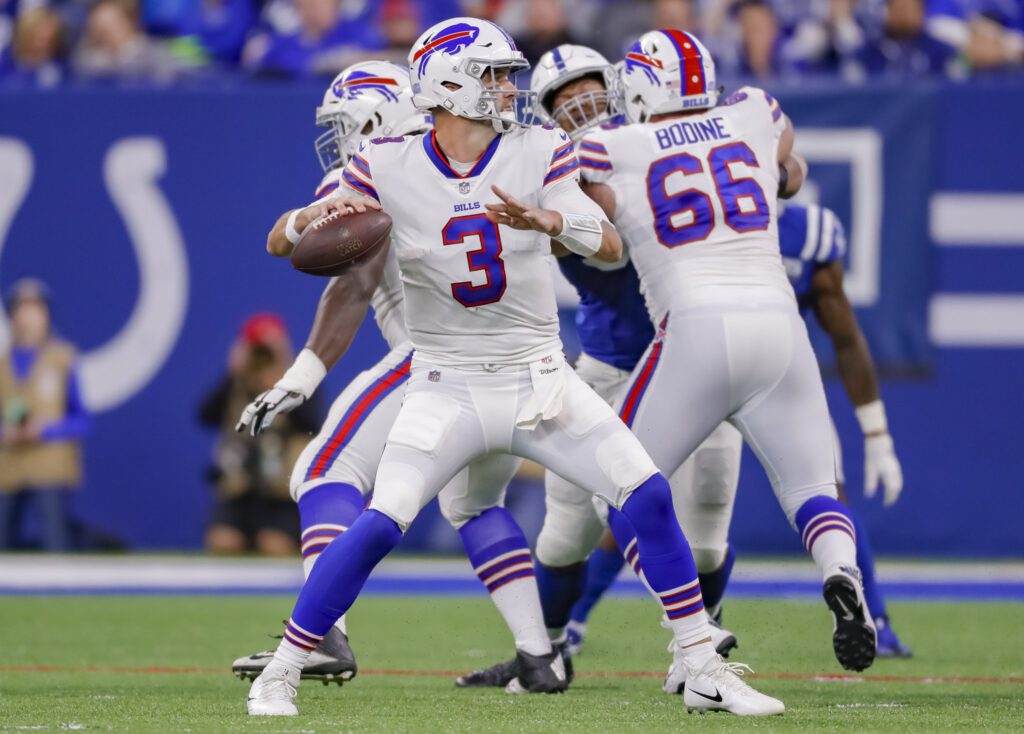 FOXBORO — As the Patriots turn the page to the Buffalo Bills (2-5) this week they’ll face another starting quarterback for their divisional foes.

Since Tom Brady arrived in New England in 2000, the Bills have started 12 different quarterbacks against the Patriots, and 14-year veteran Derek Anderson will be number 13 on Monday night.

Anderson, signed with the Bills on October 9th to backup rookie Josh Allen, and has appeared in one game for Buffalo starting last week’s loss to the Colts.

“He’s been in the league. We saw him at Carolina, saw him at Cleveland. I mean, there’s plenty of film on him,” said head coach Bill Belichick at his Wednesday press conference.

The coach then added, “I’m sure there will be some things that we’re not preparing for that they’ll do with him that may be different than what they did with [Josh] Allen.”

“It’s the NFL, man. They can all throw. They all have experience. He’s played 14 years. We got plenty of film on him,” said Pats safety Patrick Chung.

The Patriots will look back at Anderson’s past stops with Carolina and Cleveland to study the veteran quarterbacks’ tendencies, but the focus will be on the matchup in Week 7 with Indianapolis.

Bills offensive coordinator, and former Patriots assistant Brian Daboll is renowned for his game-plan oriented approach which he learned in New England and at Alabama under Nick Saban.

Last week, the Buffalo offense struggled mightily, scoring only three points and turned the ball over five times, four of which were on Anderson as he threw three interceptions and lost a fumble.

The veteran quarterback was also reluctant to throw the football down the field attempting just two passes of 20 or more yards in the air with one of those attempts ending in an interception.

And 13 of Anderson’s 31 pass attempts were of the check down variety in the short middle of the defense.

Anderson often read the field low to high and got the ball out quickly clocking in with a 2.37-second time to throw against Indianapolis, according to Pro Football Focus.

Although the Buffalo offense has struggled mightily this season, the unit ranks dead-last in total DVOA, the Patriots won’t take any opponent lightly, and we’ll still take the time to familiarize ourselves with some of the Bills’ go-to passing schemes below:

The most common design that Anderson feels the most comfortable running is the hank concept and the Bills ran it with regularity against the Colts on Sunday.

The route concept is straightforward: there’s a curl-flat combination on one side of the formation, and the tight end runs a curl into the middle of the defense.

This design is a great cover-3 beater, a coverage the Patriots frequently run, as it presents a vertical read on the perimeter and a horizontal read with the linebackers in the middle of the field that often separate in zone coverages.

On this play, Bills wide receiver Zay Jones runs the curl at the top of the screen while running back Chris Ivory runs into the flat and tight end Charles Clay runs a curl over the middle. Anderson reads the linebackers as they stretch horizontally and completes the pass to Clay for 11 yards.

Here’s another variation of the hank concept from Daboll and the Bills. This time, the Bills have two receivers aligned to the quarterbacks left, and they combine on the curl-flat combination while the running back releases over the middle. Benjamin gets open against man coverage on the curl and Anderson puts it on him.

Based off of last week’s film, it’s evident that this is Anderson’s favorite route concept.

In today’s NFL, every team has their version of the Chip Kelly mesh concept.

The Bills have a few different iterations of the mesh, but Daboll’s favorite has two wide receivers cross over the middle while tight end Charles Clay runs a wheel route up the sideline.

The Colts did an excellent job of defending the wheel on this play which made Anderson force a back-shoulder throw to Clay that fell incomplete, but you can see how the play design stresses the defense both horizontally and vertically. The receivers over the middle should be closer together to create more of a rub at the mesh point as well.

Daboll also borrowed from Josh McDaniels’ playbook at times on another kind of mesh concept that led to a 17-yard completion to Clay in Week 4.

The Bills run hi-low crossers from right to left while the shallow crosser creates the mesh with Clay going in the other direction. The Packers get crossed up in their coverage as linebacker Clay Matthews thinking they’re passing off the receivers while rookie corner Jaire Alexander continues across with this man. The coverage bust leads to a big gain for Buffalo.

The Bills called mesh concepts in every game this season regardless of who was at quarterback.

The dig route also referred to as an in-cut, requires a vertical stem from the receiver before he cuts across the field at a 90-degree angle typically 12 yards downfield.

Benjamin’s size makes it difficult to defend these kinds of routes as he’s able to use his body to box out the defender to create a throwing lane for the quarterback.

In this example, Benjamin is at the top of the screen working against Colts corner Kenny Moore. Benjamin immediately attacks Moore’s inside shoulder with a terrific vertical stem that gets the corner on his outside hip to create easy separation when he cuts at the top of the route. Moore does a nice job of recovering to contest at the catch point, but you see Benjamin’s size become a factor as he shields the defender from the football to haul in the pass for a 17-yard gain.

Benjamin doesn’t get a ton of separation at the top of his routes, but he doesn’t have to due to his large frame and strong hands at the catch point.

Although some coverage calls can slow down the Bills offense such as split-safety looks and aggressive man coverage; defensive line stunts to generate pressure on the quarterback are the most effective way to limit the Buffalo offense.

The Bills offensive line has struggled mightily this season in pass protection allowing pressure on 42.6 percent of passing plays (26th in NFL).

On this play, the Colts send rookie pass rusher Kemoko Turay on a slant rush from the edge while defensive tackle Margus Hunt wraps behind Turay’s rush on the stunt. Turay slips between the left side of the Bills offensive line as left tackle Dion Dawkins and left guard Vlad Ducasse fail to pass off the stunt. Anderson is hit as he throws but is still able to complete the pass to wide receiver Andre Holmes despite the pressure for a third down conversion.

Although Anderson bails his offensive line out on that play, you can see how stunts, actions that the Patriots deploy often, can be a problem for the Bills offensive line.

It’s difficult to convince yourself that a Bills offense that ranks last in points (11.6) and 31st in yards per game (234.0) could keep up with Tom Brady and the Patriots.

However, the Patriots defense has to prove that it can play at a high level consistently and have a perfect opportunity to grab some momentum by shutting down an extremely limited Bills attack.

The future of the Bills franchise rides on the success or failure of rookie quarterback Josh Allen, but Allen won’t play in this one due to an elbow injury which forced Anderson into the starting role.

Anderson’s first start with Buffalo was a mess, but that doesn’t mean the Patriots can expect the same out of the veteran quarterback this week.

All the Patriots can take away from the Bills’ offensive performance against the Colts a week ago is the style of offense they ran with Anderson under center.

Although the Patriots have 14 years of tape to study up on Anderson, they only have one game of him in a Bills uniform.