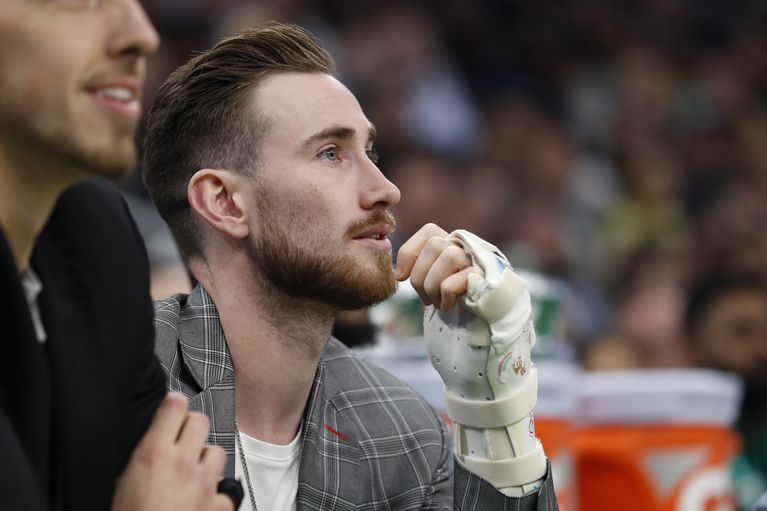 Before last Saturday’s matchup against the Spurs, Gordon Hayward was playing his best stretch of basketball in years.

Headlined by a combined 59 points, 17 rebounds and 14 assists in two games prior to San Antonio, Hayward was on pace to have an explosive month of November before he ran into Spurs big man LaMarcus Aldridge off a screen and immediately knew something wasn’t right.

“You always think about the worst-case scenario,” Hayward said. “Certainly on the play I didn’t know exactly what happened but I heard it and felt it, and knew something immediately was wrong. That’s why I signaled, ‘Let’s go check this out.'”

Hayward, who spoke to the media for the first time since suffering from his broken left hand injury Wednesday night prior to tip-off at TD Garden, was in a splint at the podium. It was decorated by his two daughters — they’ll be seeing their dad more than they typically do during a five-game road trip as Hayward will hang back while his team flies out to California to kick off their first long stretch of road games of the regular season.

Hayward underwent surgery to repair a fracture in his left hand on Monday. He’s expected to miss at least six weeks — which isn’t the worst news in the world for someone like Hayward, who missed an entire season due to an ankle fracture after playing only the first five minutes of it and was forced to undergo a second surgery prior to the start of the 2018-19 campaign before he finally returned to the court at full strength.

When you look at things through his perspective lens, you can’t help but think about how things could have been a lot worse.

“I think this time around, I’ll be able to run around, use my legs, maintain my conditioning, which I’m thrilled about,” Hayward said. “And then be around the team, too. And kind of stay involved, which is good.”

The Celtics will embark on their five-game, west coast road trip Friday night in San Francisco against the Warriors and make stops in cities like Sacramento, Phoenix and Los Angeles.