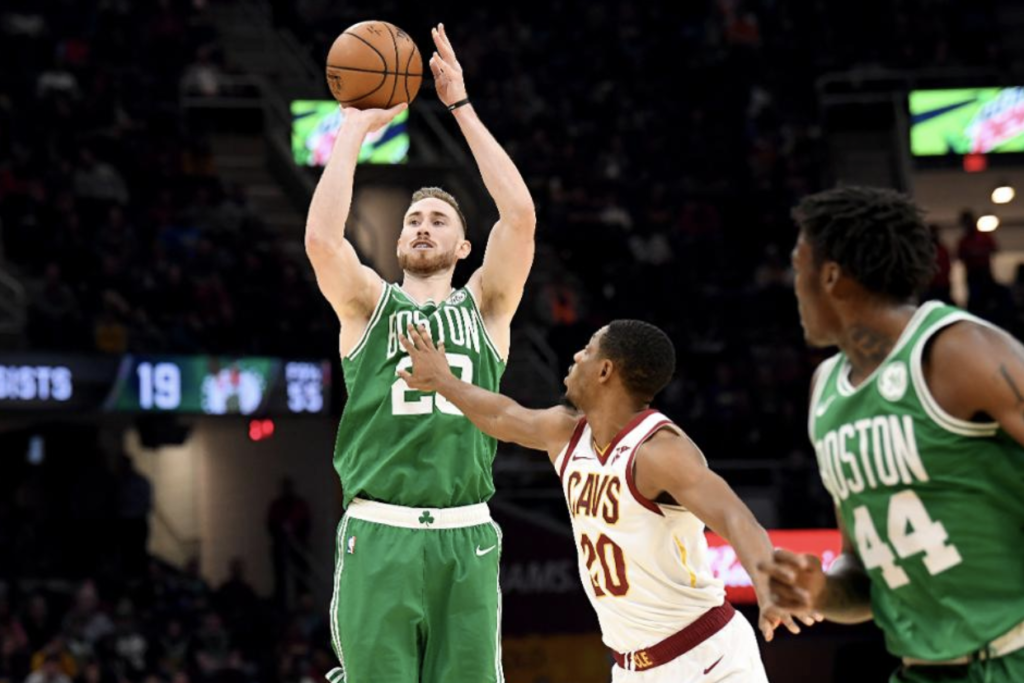 If we’ve learned one thing about COVID-19 and its impact on athletes, it doesn’t discriminate.

Countless athletes have tested positive for the coronavirus since it really came into our consciousness in late February and early March.

But only one game was played, in Indianapolis against the Pacers. That would be the final game Boston played before the sports world went into an indefinite hiatus, and two days before the Celtics were to have played the East-leading Bucks in Milwaukee.

So many things were running through the mind of Gordon Hayward. His health. The health of his teammates and that of his wife, Robyn, expecting their fourth child.

“Yeah, I think everyone was a little bit scared at that point in time just because of the uncertainty, and not knowing exactly what’s going on,” Hayward recalled in a conference call Friday. “And also because we have played the Jazz and (Gobert) was somebody that had tested positive, and just with my wife being pregnant, we were definitely a little nervous about the whole thing and you know, definitely didn’t want to let her or anybody, but specifically her, get to get the virus because of up the baby.

“We didn’t know what exactly happened (in Oklahoma City). So, we were just very, very cautious about everything and maybe I didn’t go anywhere, isolated myself, didn’t do anything besides just being at the house. But I did but you know. Our doctor said probably not as many hugs, not as many snuggles until we can figure out if I’m positive or negative. So that’s kind of what we did until you know, we got back the results.”

Hayward did not test positive but teammate Marcus Smart did shortly after, with Smart sharing that news on social media on March 19. All he could do in the meantime was isolate and try to keep his three children and wife safe. It was more tense than any game he had played.

“Yeah, it certainly was,” Hayward recalled. “I mean, I think just like I said because of our situation with Robyn being pregnant, it was a little nerve-racking but certainly a relief to be negative and nothing it was something we’re okay. We’re all fine. As long as we stay in our bubble here and make sure we take care of everything that we need to take care of to stay safe.

“I think just being able to be with them more and really take advantage of that time,” Hayward said. “We haven’t done necessarily too much different. We just don’t know what up everything when it’s nice out. We’ve been trying to get them outside go on a walk with the dog.”

Many think that pro athletes are super-human when, as COVID-19 has proven, they’re just as susceptible to the emotional and mental challenges facing everyone in times of forced isolation and limited freedoms.

“I think physically it’s one thing when it’s nice out and I’ve running outside and we have Peloton,” Hayward told me. “I’ve been doing the Peloton and I’ve done a lot of body weight stuff and some dumbbells, a little bit of kettlebells as much as I can from the physical side of it, but I think the mental and emotional part is certainly going to be something we’re all gonna have to work through when we get back because you just get into this mode and this mindset when you’re in the middle of the season and then it (stops).

“Just not have that for however long a period this is going to be it’s going to be an adjustment to get back into that. Especially, if it if we get back and it’s, you know, almost right into the playoffs. You’ve gotta be able to really turn it on there and get really locked in and focused again. It’s something I think that the staff and the coaches have talked to us a little bit about and we’ve done some Zoom calls with the team and trying to stay connected. I think that will help us out when we get back.”

“After finding out that I didn’t have it and that nobody around us has it, that’s been a relief,” Hayward said. “I think everybody in the world has two people that are connected to this, that has gotten the virus and some people have been put on life support had to go to the hospital and that’s sad. It’s heartbreaking.

“We have reached out and tried to do as much as we can for the people here in Boston, some of the community. Certainly, for us, we just try to stay safe. I’ll make sure that we’re checking ourselves and not putting anybody else at risk, and I think everyone’s right to do. That would be better over the long term.”

Like the rest of us, Hayward has spent some time in the time machine, going back and watching old games, like the 2010 NCAA title game when his half-court shot nearly beat Duke at the buzzer.

“Time went on and (Robyn) hadn’t watched since and so she wanted to check it out and see if the way I looked and how different I was. Actually, we when we were watching the game the President’s announcement came on with like three minutes left in the game and then they didn’t play it back again. They just had already skipped over to the ceremony. So, she still hasn’t seen the ending or anything like that, but it was certainly it did bring back good memory to watch… I’ll never forget those moments.”
Just like any couple that might be seeing a bit too much of each other over the last month, Gordon and Robyn Hayward have also had their challenges during this time.

“Because I’ve been home the whole time and we haven’t been able to go to the barber anything and my beard was getting a little scraggly,” Hayward said. “And Robyn was getting a little upset at being around me all the time. So, I just decided there was already a lot of tensions on the time being at the house all day with everybody. So just decided to shave it so I could relieve some of that tension for everybody.”

But this time has also reminded the Haywards of the incredible chance to give back to Boston during difficult times.

“I think it’s something that Robyn and I are both passionate about, and there’s been other places we’ve donated as well, but just specifically with that we realize and appreciate so much what the people that are continuing to work and continuing to provide support and help for her people that get sick,” Hayward said. “We just wanted to show some gratitude to them.

And highlight the heroes that they are right now. Robyn and I can attest to getting (that morning drink) to get you going. She drinks coffee. I drink green tea, but kind of having your Dunkin in the morning or whatever it is you get in the morning. A lot of those places aren’t open sometimes and we wanted to kind of get some people some gift cards and some Dunkin so that way they can keep going for us.”

Hayward believes if and when the NBA returns, teams will need at least 2-3 weeks of training to get back in shape. And yes, he’s heard the plan to play in a remote city like Las Vegas in empty arenas.

“I think playing with no fans would be would be pretty wild,” Hayward said. “It just it almost be like a scrimmage at training camp. You have to bring all your own energy. Home court advantage is pretty much thrown out the window at that point in time. It’ll be completely different and it’ll be very interesting to see how it all plays out.”

How long does he think it would take for a king to get back into the proper shape to actually compete again?

“It’s hard to say exactly but it’s already been almost four weeks, or a little over four weeks and guys really haven’t been able to get on a court or in front of a hoop or anything,” Hayward said. “And I think just from a safety standpoint… I’m guessing at least two to three weeks of
being able to run full court and jumping play basketball before you can hopefully see anybody play. You don’t want to put yourself at risk for her getting injured. This is all new to everybody. And so I think that’s something that has to be taken into consideration, just to help the players and not putting people at risk by trying to rush the season back.

“For us play (however) many games in a short period of time, I don’t know what they’re going to do. But like I said, I think that’s something that needs to be taken into consideration.”