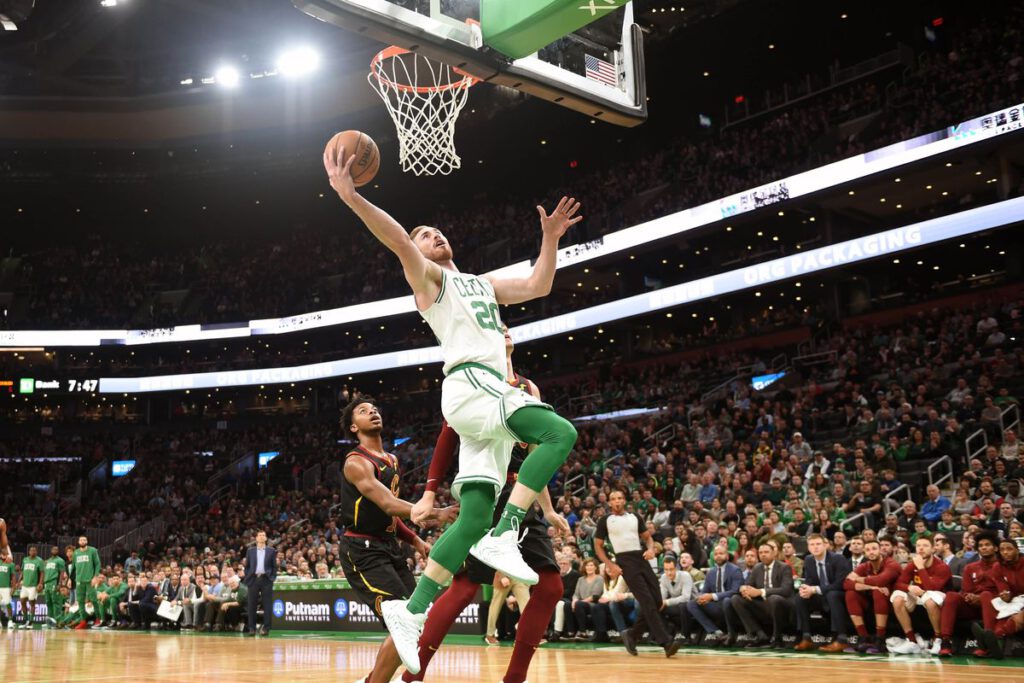 Gordon Hayward returned to the parquet Monday night at TD Garden and didn’t miss a step from the player he was prior to last month’s injury.

Against the lowly Cavaliers, Hayward found the bottom of the net seven times on his way to 14 points (7-of-10). He also added five rebounds and four assists but the team Hayward played well against didn’t necessarily matter in terms of the big picture for this year’s Celtics team.

Boston not only stretched its winning streak to four straight but also did it while shooting well over 50 percent from the field. The Celtics finished the night shooting at a 57.7 percent clip and for the second straight game, all five starters shot 50 percent or better while all scoring in double figures.

Hayward, who averaged 18.8 points in eight games prior to Monday, found his offensive rhythm early in the first quarter. He scored in transition, at the rim and found his sweet spots inside the arc for clean pull-up jumpers.

Kemba Walker’s 22 points (8-of-13) led the way, Jaylen Brown (9-of-15) added 20, while Jayson Tatum finished with a double-double (19 points, 11 rebounds) and Daniel Theis scored 10 (4-of-4). The Celtics stomped out the Cavs, 110-88, it was just the kind of tuneup an upper-echelon team in the Eastern Conference needed before facing off against two of its elite competitors.

Three games behind the Celtics in the conference are the Pacers, while one game behind Boston are the Sixers — both teams will face off against Boston in a home-and-away, back-to-back set starting Wednesday night in Indianapolis. The timing couldn’t have been better for Hayward to return into the fold.

The Celtics have a chance to not only extend their winning streak to six games but can also send a message to the rest of the east.

“The hand feels good,” Hayward said after Monday’s win. “I’ll get some more treatment on it tomorrow and get ready for the next game.”

Monday night was a great way for him to get valuable playing time to get himself reacclimated with his teammates and Wednesday night is a great opportunity for him to return to his hometown — where he put on a clinic while the Celtics clinched the Eastern Conference Semifinals in Game 4 against the Pacers back in April.

“Yeah, I thought he was pretty good,” Brad Stevens replied when he was asked to assess Hayward’s performance Monday night. “I didn’t anticipate much, it hasn’t been very long in the big scheme of things, especially what he went through last time. You know, he go his baskets off cuts, his typical energy plays. With the score being what it was, I didn’t want to take him out. I wanted to get to where I wanted him to play minutes-wise in that third quarter and stretch himself with 12 straight minutes. But I thought he was good.”

The Celtics will also take on the tough task of avenging their season-opening loss in Philly against the Sixers. Old friend Al Horford will make his return to TD Garden for the first time since signing with the Sixers, and the Celtics look like a much more revamped, confident and well-disciplined group compared to the team they were back in mid-October.

For Hayward, Monday was a good test against Cleveland’s big men like Kevin Love and Tristan Thompson.

“Tonight was a good test with dealing with their bigs and blocking them out,” Hayward said. “Certainly, like I said, I have to build some more strength up in it but my emotions are not all the way back but I don’t feel like it affected me.”

Hayward said he will have to wait and see how his hand responds tomorrow morning after clocking in 26:10 against the Cavs. The Celtics will have one day off before traveling to Indiana to take on the Pacers.