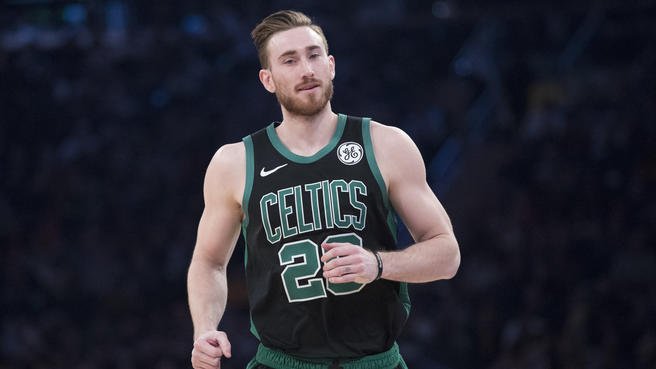 The Celtics will be without Gordon Hayward for an undetermined amount of time after the star forward fractured his hand in a blowout win on Saturday over the San Antonio Spurs.

Boston shot at a 51.1 percent clip, topping the Spurs, 135-115 and improved to 7-1 on the season. However, following the win, the focus shifted from the win to Hayward.

After another impressive first-half start (9 points, 2 rebounds in 14:49), Hayward fractured his left hand when he ran into LaMarcus Aldridge on a screen in the second quarter. Hayward’s teammates learned about the news during halftime and reacted to it following the win.

“I was pissed,” Kemba Walker said. “I didn’t say anything. I was really in shock for the most part. In those kind of situations, it’s kind of hard to say anything, you just don’t even know what to say sometimes. But yeah, it’s a tough man. We’re going to miss him for the time that he’s out.” (Masslive.com)

The devastating news comes in the midst of Hayward’s best month with the Celtics. He’s averaging 20.3 points while shooting 62.2 percent from the floor, 7 rebounds and 4.8 assists in November.

Throughout that four-game span, the Celtics have capitalized on Hayward’s strong outings and have turned them into a seven-game winning streak. Now, the Celtics will have to continue without him for the foreseeable future as they head back home to host a pair of matchups against the Mavericks and Wizards.

“I just tell him to keep his head up at the end of the day,” Stevens said. “That’s the only thing you can do. He’s worked hard, he’s in good shape, and he’ll keep himself in good shape. Now he has to encourage some of our wings off the bench. They need to be ready to be called upon to contribute every night.”

Expect Javonte Green to be one of those guys. The walk-on forward has seen an uptick in minutes recently in light of back-to-back blowout wins, however, he’s taken advantage of the opportunity by turning in 18 points in 26 minutes.

“Ever since I got here, I looked up to G. I love his work ethic,” Green said. “It’s sad it had to be him but we’ll keep this train going, everything is for him.”

Hayward will see a specialist on Monday, according to ESPN‘s Adrian Wojnarowski, who spoke to Hayward’s agent, to determine if the injury will require surgery.

“This one doesn’t feel near as bad as it did two years ago,” Brad Stevens said. “He’ll be back. He’ll be off for a few weeks or a month or whatever it is.”