Grant Williams is adjusting to extra defensive pressure in the corner and admitted he's struggling to make the split-second decisions to shoot or drive. 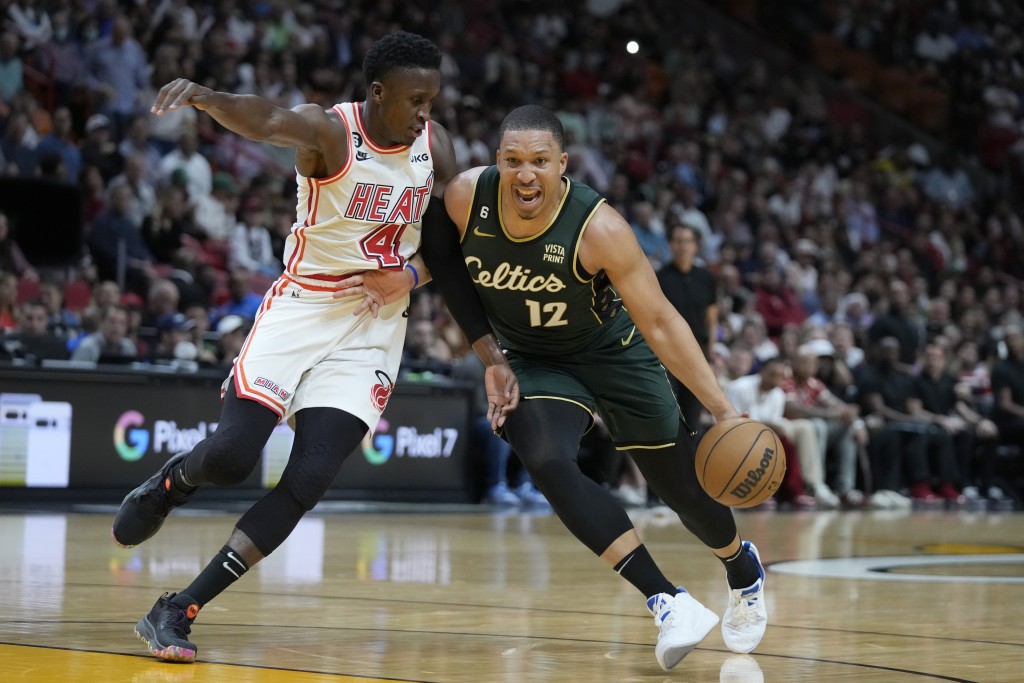 MIAMI — Grant Williams vowed never to get taken off the floor by a defense again after the Warriors forced him to shoot 30% from three in the Finals. He displayed his progress on opening night, up-faking from the corner, driving across the baseline and flipping home a reverse layup that hung on the rim then fell in. The make sparked a 52.9% start from the field for Williams while he hit 45.2% from three through 20 games.

The Celtics’ offense slid since then as defenses adapted and three-point efficiency regressed. The defense Philadelphia played against Williams on opening night persisted as opposing teams now fully respect the corner specialist and rush to the spot to remove him from his office. Williams up-faking against a rushing defender, spinning around him and dribbling into the baseline area became a constant visual to start the season. In Tuesday’s 98-95 loss to the Heat, Williams flushed every three-pointer he attempted and shot 0-for-3 inside.

“It’s respect to the shooter, something I’ve never dealt with in my life,” Williams told CLNS Media in the locker room after.  “I’m excited to continue to get better with it … sometimes the adjustment is shoot the ball, shoot the ball with confidence, and then when guys fly at you, just make the right read, whether it’s pass it, move it, be aggressive and drive it. Today, I feel like I was in that in-between stance a lot, so rather than making sure you made the right read every time, I didn’t necessarily do that.”

Jayson Tatum similarly struggled to make quick decisions late in Miami, admitting he allowed the Heat to load up multiple bodies on him. They doubled him when he tried to attack Gabe Vincent with the Celtics behind by two in the closing seconds and Tatum unloaded a pass into Tyler Herro’s space in the zone trying to find Williams in the corner.

For shooters like Grant, the Celtics’ ball-handlers need to produce nearly all of his looks. Once they catch the ball, they become de-facto facilitators for the offense. Joe Mazzulla prefers they take open threes when available to avoid turnovers and other mistakes. Miami’s mix of zone, blitzes and switching caused hesitation.

Williams attempted 3.9 threes per game in November and December, which slipped to 3.3 in January, a modest decline that also showcases some of the difficulty he and others face unloading shots. He’s averaging 9.0 points per game in January, in line with his season average on 41.8% shooting and 34.9% from three. The Celtics rank 19th in offense since November ended, 17th in shooting efficiency (53.9 eFG%) and 24th in three-point shooting (34.3%).

“I’ve got to shoot the ball when I’m open,” Grant told CLNS. “I feel like I passed up a lot of shots today just because guys are either running me off or closing into my body, and knocking down that shot at the end is something I should’ve been doing the entire game. It’s just staying aggressive in that way, and then offensively, making the right read, taking your time and not rushing through the action. That’s probably something I could’ve done better this game for sure.”

Mazzulla took his share of the blame for Tuesday’s result too, saying he should’ve stepped in with a play call to improve Boston’s spacing, but defended not calling timeout. Miami already forced him to call one by erasing a 10-point deficit early in the fourth quarter. The Celtics, who last scored on a pretty Derrick White and Robert Williams III pick-and-roll, fell into a 0-for-10 drought across 11 possessions where they only attempted one shot inside the restricted zone after Miami’s timeout, and finished the fourth quarter 5-for-21 with 13 points.

After a string of shot-range floaters failed to fall Williams III, White and Tatum, who hung his head following one as Miami scored the other way, and a pair of open misses from three by Payton Pritchard and Sam Hauser, Grant drove past Max Strus and touched the front of the rim with a floater miss trailing by two. He tied the game from three several possessions later in the right corner. In a three-point loss, he needed to provide one more, the make marked his final shot attempt before Pritchard’s last second heave caught nothing except air.

Williams is now shooting 55.6% in the paint outside of the restricted zone and 31.3% from mid-range as he tries to expand his game. He showed flashes, facing up Victor Oladipo from above the three-point line to draw free throws. He scored 25 points at Toronto on Saturday to lead a Celtics win with multiple starters hurt, but on Tuesday, fell short and placed some of the blame on himself.

“They did a good job, credit to them, of forcing us into rushed scenarios in a way,” Williams said. “We’ve just got to be better executing late game. That’s a sign of respect for a team, to play zone against your third unit. That’s one of those where it’s a credit to your team and how talented you guys are.”