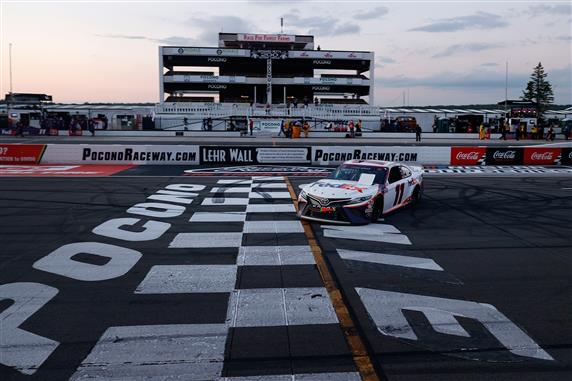 Denny Hamlin won the Pocono 350 from Pocono Raceway on Sunday afternoon in the second race of Pocono’s NASCAR doubleheader weekend.

Hamlin beat Kevin Harvick in a reversal of Saturday’s race at Pocono, where Harvick beat Hamlin for the win.  Hamlin picked up his sixth-career victory at the track, which tied him with Jeff Gordon for the most all-time at Pocono.

Hamlin said the victory shows off the work his team has put in at the shop.

“Six…I can’t even put it into words at how much it means to me,” Hamlin said.  “This is work that happens in the shop.  This is way beyond what happens on race day.”

The race once again came down to pit strategy, and the divergent strategies of Hamlin and Harvick proved to be the difference.  Harvick pit when the fuel window opened, but Hamlin drove until his Toyota was almost out of fuel.

After Hamlin pitted for fuel, he came out over a second ahead of Harvick.  That proved to be the difference, as Hamlin was able to work his way through lapped traffic over the final 20 laps to pick up his fourth victory of the season.

Hamlin said he was worried a caution would come out and ruin his strategy before everything cycled around.

“I knew we had the car, and I just kind of maintained my gap right there,” Hamlin said.  “I just tried to work the traffic the best I could, and obviously [crew chief Chris Gebhart] was paying attention to strategy there and made the right call.”

Harvick said his team attempted a strategy in the event a caution came out, especially with darkness threatening to end the race early.

“We didn’t want to get caught with a caution and then wound up losing a little too much time in lapped traffic,” Harvick said.  “[Hamlin] was out there running clean laps and waited until right to the very end, and he wound up in front of us.”