Hamlin Dominant in First Half of Dover Doubleheader 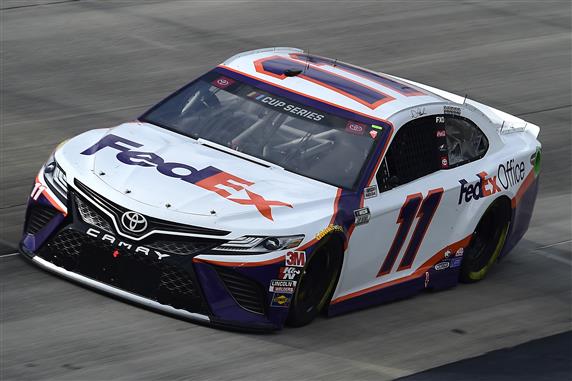 Denny Hamlin dominated the Drydene 311 in the first half of NASCAR’s doubleheader from Dover International Speedway on Saturday afternoon.

Hamlin led a race-high 115 laps throughout the race, but had to fight his way back to the lead in the closing laps.  Hamlin was second as his teammate Martin Truex Jr. struggled in lapped traffic.

Hamlin took the lead with less than 10 laps to go, and he pulled away from Truex over the final eight laps.

After winning his sixth race of the season, Hamlin said he was happy to get back to victory lane after falling short the past few weeks.

“I’ve been running down the leaders these last few weeks but I haven’t been able to get there,” Hamlin said.  “Proud of this whole FedEx team; this Camry was fast today.  Just unbelievable at how good it was.”

The victory was Hamlin’s first at Dover, and he said his team is locked in as the Playoffs are set to begin in two weeks.

“Working as hard as I ever have, and I can’t complain about anything right now,” Hamlin said.  “I’ve just got faith when it comes down to it.  On that last run, when he says ‘go get it,’ I go get it.”

Truex inherited the lead after pit stops cycled around, but he was unable to hold off Hamlin after getting hung up in lapped traffic.

Truex said the combination of lapped traffic and his car’s poor handling made it hard to race Hamlin at the end of the race.

“I think if the 10 [of Aric Almirola] wasn’t pinning it on the bottom in front of me I’d have been fine,” Truex said.  “In the end, we just weren’t good enough.  Nothing I could do, just out-of-control sideways.”