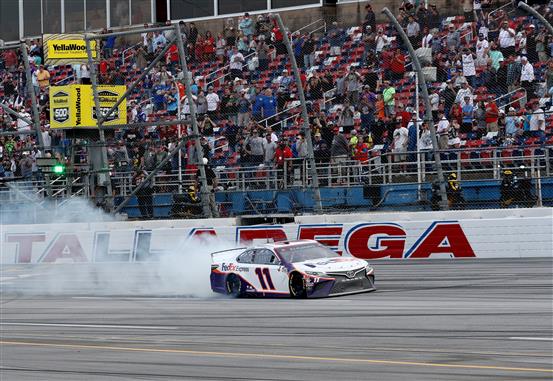 Denny Hamlin won the YellaWood 500 from Talladega Superspeedway on Sunday afternoon, beating Matt DiBenedetto to the line in a photo-finish.

Hamlin ran in the back for most of the race to conserve his car for the finish, and he was able to race his way to the front over three overtime finishes.  Hamlin made the pass for the lead as the field entered the trioval, and he was able to beat DiBenedetto to the line by .023 seconds for his seventh victory of the season.

Hamlin said the surprise victory made up for some tough losses throughout the year.

“We just played the strategy…to ride in the back until we were locked in, but things just worked out,” Hamlin said.  “Really excited about this win, unexpected for sure.”

After NASCAR ruled Hamlin was forced down by Chris Buescher, Hamlin said he did what he could to avoid an accident.

“They were crashing in front of us,” Hamlin said.  “Obviously I got forced down like [DiBenedetto] and others did.”

DiBenedetto made a block on William Byron in the middle of turns 3 and 4 that sent Byron’s 24 below the yellow line, and NASCAR ruled against DiBenedetto; his second-place finish turned into a 21st following the ruling.

DiBenedetto said he was doing all he could to hold off the field to try to pick up his first career victory.

“It was actually tough to see, my windshield was filthy from all the Speedy Dry,” DiBenedetto said.  “I was having trouble seeing the block; I was blocking every lane.”

Hamlin took away DiBenedetto’s chance at a victory last year at Bristol, and DiBenedetto said it was a bout of unwanted déjà vu this year at Talladega.

“The emotions…I feel like it’s the same story,” DiBenedetto said.  “Just heartbreak; my wife and I have had a stressful week again.”

“Denny did a great job.  Denny deserves all the support in the world; he’s an incredible racer.”