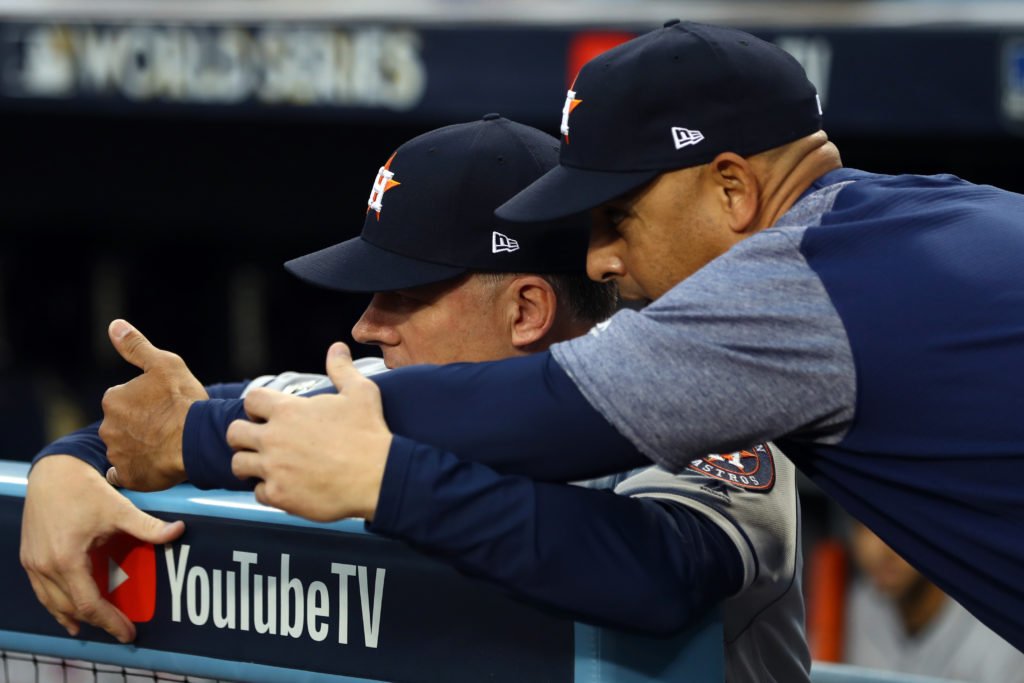 The anticipation was that the Houston Astros’ punishment would be severe for their sign-stealing scheme that took place during the 2017 season. And it’s as harsh as Major League Baseball’s ever gotten under the reign of Commissioner Rob Manfred.

According to The Athletic’s Ken Rosenthal and Evan Drellich–the two who initially broke this scandal–Manfred’s decision has been made. The verdict: Manager AJ Hinch, along with General Manager Jeff Luhnow, will be suspended for the entire 2020 season. The punishment doesn’t end there.

Along with the year-long suspensions–the longest for a manager since the infamous Pete Rose–the MLB will also strip Houston of their first and second-round picks in both the 2020 and 2021 drafts. They’ll also be handed a maximum fine of $5 million.

Directly linked to this investigation and scandal is current Red Sox manager, Alex Cora. The following day after the initial story was released, The Athletic reported that Cora was a key player in the scandal.

In his statement, Commissioner Manfred says that this scheme, which involved a center-field video feed being fed directly into the dugout tunnel, was mainly player-driven, except for Cora, who was then the 2017 World Series Champions’* bench coach.

“Witnesses consistently describe this new scheme as player-driven … with the exception of Cora.” pic.twitter.com/BbUZHulZlh

The Red Sox are currently under investigation by the league as well for allegedly utilizing the team’s video replay room to steal sign-sequences. The sequences would then be relayed to the runner on base who could then communicate the next pitch directly to the hitter at the plate.

From Rob Manfred, Hinch did not agree with what his players and Cora were doing. Although he did not directly tell them, he did attempt to signal his displeasure of the practice by physically damaging the monitors that were set up by Cora.

So, by MLB’s accounting, AJ Hinch literally smashed video monitors that were part of a cheating scheme the league says was “arranged” by Alex Cora, Hinch’s bench coach. pic.twitter.com/SUsDGqFj5F

According to ESPN’s Jeff Passan, punishment for Cora is expected to be harsh.

No players were disciplined by Major League Baseball in the Astros’ investigation. While Mets manager Carlos Beltran was part of it, he was a player at the time and thus was not suspended.

Discipline for Red Sox manager Alex Cora is coming. It is going to be harsh, per sources.

As Passan notes, no players were disciplined, including now New York Mets’ manager Carlos Beltran, who was also reportedly heavily involved in the creation of the scheme. Beltran was a player at the time of the incident.

The Athletic had four sources for the initial story who were with Houston during the 2017 season. One of those sources being pitcher Mike Fiers, who was with the team from 2015-2017.

During the Winter Meetings, Manfred had said, “this is probably the most thorough investigation that the commissioner’s office has ever undertaken.” The investigation included a review of 76,000 emails.

Cora is now involved in two major scandals that have hit the league in recent months. Due to this, and his reported heavy and direct involvement, anticipate that his punishment will be more severe than Hinch’s.

Punishment for Cora will be levied following the completion of the MLB’s investigation into the Red Sox 2018 sign-stealing allegations.

UPDATE: During his live press conference shortly after the breaking news, Astros’ owner Jim Crane says he has fired both Jeff Luhnow and AJ Hinch.