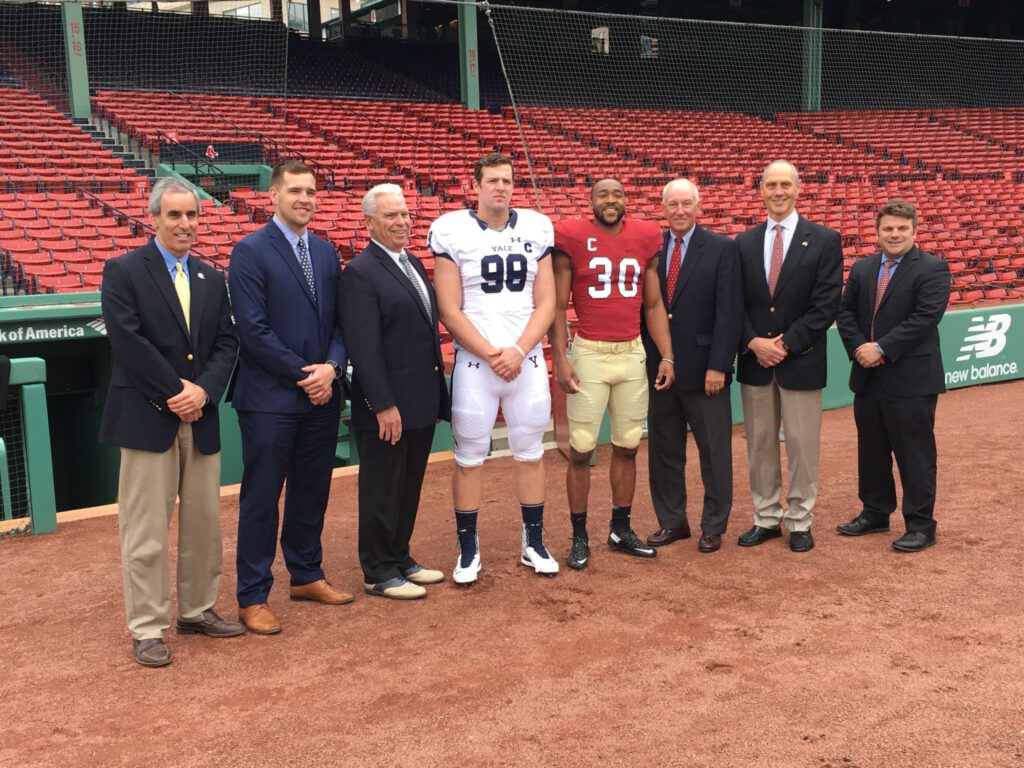 BOSTON — The 135th playing of “The Game” between ancient rivals Harvard and Yale will be unlike any of the 134 before it.

That’s because this November 17 the most famous college grudge match in the Northeast will take place at a sold out Fenway Park.

How big a moment is this in the life of young sports fans who attend either Ivy institution?

Consider Red Sox Chairman Tom Werner was a freshman at Harvard in 1968 when he became so overwhelmed with joy at Harvard tying the game on the final play that he ran onto the field and became part of the mob celebrating The Crimson’s 29-29 “victory” over Yale on the final play of the game.

Werner was, as a matter of fact, on hand Tuesday laughing at himself as they played that film on the big outfield video board during media day festivities. Werner and Red Sox President Sam Kennedy were on hand to hand out ceremonial jerseys to the Harvard and Yale team captains that will represent the schools on Nov. 17.

This year, Fenway Park has the honor of hosting not just the 135th edition of “The Game” but the 50th anniversary contest of arguably the most famous game in the history of the rivalry.

But this November 17, the most storied rivalry in New England college sports take center stage and the public has already responded. Individual ticket sales have sold out in less than a week after going on sale on April 27.

“Right before my freshman fall, I came up for a game and sat right behind Pesky’s Pole,” said Miller, a native of Houston, Texas. “It was one of the coolest experiences I’ve ever had so definitely being able to come back here and finish out my college football career is going to be an awesome experience because I started off, before I even stepped on campus, right there behind the pole.”

On Tuesday, Miller and Mullen had the chance to put on their uniforms and take pictures with the Green Monster in the background.

“It was hard not to daydream,” Miller said. “Being out there in the gear against a Yale player, Kyle, you can definitely feel it. I’m excited to get out here in six months. Last year, we had the opportunity to see Brown and Dartmouth play here and that was a night game. We’re not going to be able to experience a night game but it was very cool, being able to experience the game off TV. Just knowing we were going to be playing there next year was very cool.

“We actually were told that is just sold out a couple of hours ago. We were told standing room was completely sold out. I expect it to be absolutely nuts, people going crazy. I have no doubt our fans will travel well, tons of people from Boston will come out and support us. I’m very excited about the energy that will be (in the park).”