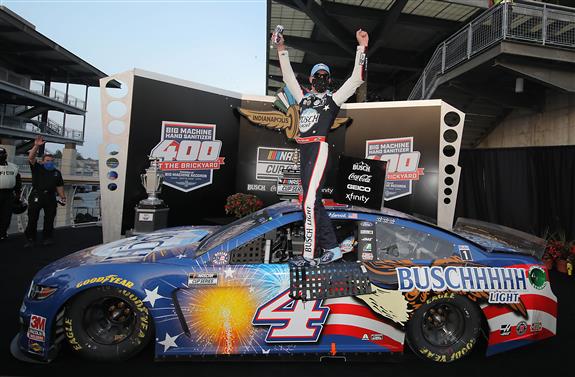 Harvick battled with Denny Hamlin throughout the day as the two fastest cars.  After Hamlin’s tire went down with seven laps to go, Harvick was able to hold off Matt Kenseth during an overtime finish to win his third Brickyard 400.

Harvick said winning at Indianapolis was a childhood dream when he was growing up.

“It’s the Brickyard man, this is what I grew up wanting to do as a kid,” Harvick said.  “To be able to come here, and have won for the third time, is something I could have never dreamed of.”

Throughout the race, Hamlin’s tire wear was worse than Harvick, and his crew chief told him to keep pressure on Hamlin over the final run.

Harvick said he tried all he could to get Hamlin to overdrive his car.

“[Crew chief Rodney Childers] told me on the radio, ‘just make sure you keep the pressure on him,’ and that was all the pressure I could give,” Harvick said.  “We knew he was going to be really close on tires.”

Hamlin said he was disappointed his race ended early after having such a good car.

“It’s tough, I hate it for the FedEx team,” Hamlin said.  “We did what we needed to do; just didn’t work out.  Had a fast car, obviously.”

Kenseth finished second, and said he tried what he could to hang with Harvick on the final restart.

“The 4 [of Harvick], they were just really, really fast,” Kenseth said.  “I could run a little faster, but I could never get enough of a run to make the pass.”