Harvick Dominant in First Half of Michigan Doubleheader 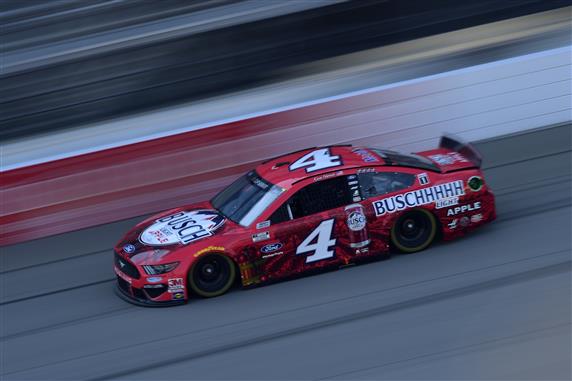 Kevin Harvick won the Firekeepers Casino 400 from Michigan International Speedway on Saturday afternoon in the first half of NASCAR’s doubleheader weekend.

Harvick dominated on Saturday, winning both stages on his way to collecting his fifth checkered flag of the season.

For the first time in a points-paying event NASCAR implemented a choose cone, allowing drivers to choose which lane they would restart in.  Chase Elliott was able to use this to get to the front after a string of late cautions, and he and Harvick battled for the lead over multiple restarts.

Harvick said he nearly showed Elliott the way to victory on one of those late restarts.

“I kind of showed my hand there a little early when I passed [Elliott] on the outside,” Harvick said.  “I knew that’s what I didn’t need to happen to us…I just had to keep him from going by us.”

Harvick won with the same car that went to victory lane at Indianapolis in July, and he will use it again in the second half of the Michigan doubleheader on Sunday.

Harvick said bringing a fast car to one of his best tracks helped him pick up the victory.

“This was an awesome car to drive today,” Harvick said.  “I think that the confidence is high when we come to Michigan; it’s a racetrack that’s been really good for us.”

Brad Keselowski finished second after failing to get by Harvick over the final two-lap shootout.

Keselowski said he and the rest of the field have work to do to compete with Harvick on Sunday.

“[Harvick] was just so fast,” Keselowski said.  “I’ve got a couple small ideas but…we’ve got some work to do.  Kevin’s just super-fast on the straightaways, but doesn’t really give up anything in the corner.”