Harvick Wins at Darlington as NASCAR Returns from Shutdown 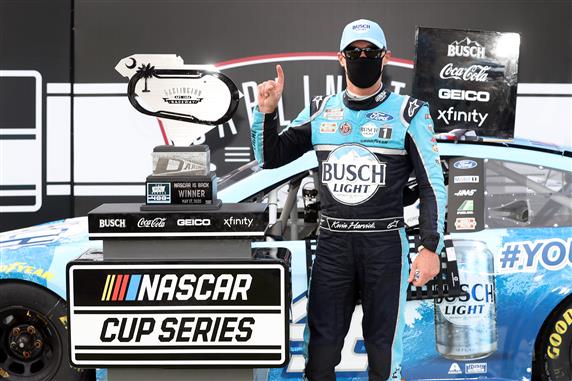 NASCAR returned to the track for the first time after a 71-day shutdown due to the Covid-19 pandemic.  The race was run without fans in attendance, and there were no practice or qualifying sessions leading up to the race.

Harvick had a dominant car throughout the race, and led 159 laps.

Harvick said his team’s ability to unload with a fast car helped them succeed under Sunday’s unusual circumstances.

“I think as you look at Darlington and as you look at the things that happened this weekend, we really thought it was going to play into our hand,” Harvick said.  “Our guys are so good at hitting the car off the truck.”

The victory was Harvick’s 50th in the Cup Series, which tied him with NASCAR Hall of Famers Junior Johnson and Ned Jarrett.

Harvick said it was odd to pick up such a big victory without fans in attendance.

“It’s a pretty big honor to win 50 races in this deal,” Harvick said.  “It is weird, just because there’s nobody up there.  I didn’t think it was going to be that much different, and then we won the race and it’s dead-silent out here.  We miss the fans.”

Alex Bowman finished second, and was one of four strong Hendrick Motorsports drivers that challenged up front all race long.

Bowman said second was a good way to restart the season.

“Sucks to finish second, but it’s really good to restart the season this way with a strong car off the truck,” Bowman said.  “It was a lot of fun to get to race a guy like Kevin at a place like Darlington.  Thought if I could get him there on the restart we’d have had a shot at it, but just came up a little bit short.”

NASCAR will return to Darlington on Wednesday night for the Toyota 500.  As with Sunday’s event, there will not be qualifying or practice for the race.  Instead, the field will line up based on the results of Sunday’s race, with the Top 20 finishers inverted.