Heart and Soul: Appreciating The Fire And Passion Joe Mixon Brings Bengals (And The Fans)

Zac Taylor calls running back "most genuine player" he's ever been around. 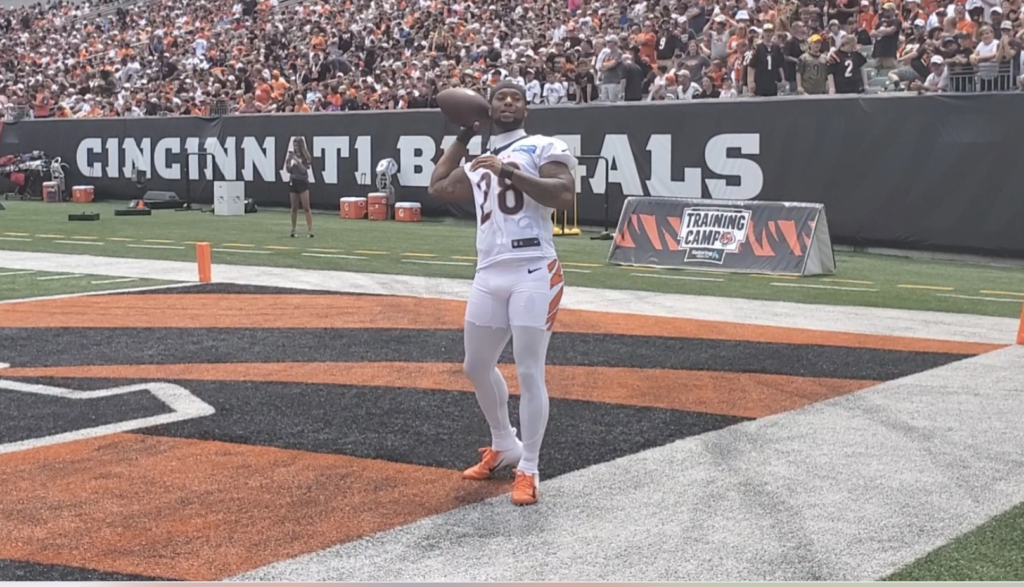 CINCINNATI – There isn’t anyone on the Bengals roster that’s more beloved or respected than Joe Mixon.

Yes, that includes the other Joe.

Joe Burrow is the most important and valuable player on the roster but when you talk about a player that is equal parts fire, determination and passion, there’s no one that matches what No. 28 represents.

One day after Mixon reiterated his deep dejection on not being on the field for the final drive in Super Bowl, Zac Taylor recognized the spirit Mixon has always exhibited in Taylor’s first three seasons.

“I think he’s really done a great job. He always comes back in great shape,” Taylor told me. “The way he moves, and you can already feel his power even without the pads on. He’s such a team guy, you absolutely should feel passion about that situation. He’s handled it outstanding. That’s much appreciated. He knows that. That’s one of the reasons why you want to get back to those moments and keep it going.”

Any of the over 28,000 who attended the Back Together on Saturday at Paul Brown Stadium got a fresh reminder of Mixon’s superior conditioning. He ran a simple flat pattern and caught the ball and raced up the left sideline 60 yards for a score, celebrating the touchdown by dancing as if it were Dec. 30 against Buffalo and not July 30 against his teammates.

He later outraced the defense on a 70-yard touchdown run late in 11-on-11s and looked fresh in the late afternoon summer heat.

Bengals fans who have come to embrace everything Mixon has brought to the Bengals appreciate the same qualities Taylor sees every day in the building. No one is in better shape or more focused bringing a first Vince Lombardi trophy home to Cincinnati.

That’s why it was so appropriate Saturday for Taylor, who first addressed the throng inside PBS, to hand off the mic before practice to the “the best running back in all of football, our own Joe Mixon,” as he introduced him.

Mixon, always one to play pre-game catch with the fans, led a “Who Dey” chant before telling the crowd, “Just know we look to run that thing back, all the way back to the Super Bowl, and we’re gonna win it. Who Dey.”

Zac Taylor thanks "vest fans in NFL' and Joe Mixon promises to "run it back" to Super Bowl and win it. #RuleTheJungle pic.twitter.com/RqztBsasf8

That is Joe Mixon in a nutshell. Quick. Efficient and to the point. All jokes aside about how much the Bengals could’ve used that on the final drive when they failed to get the season’s most important yard, Mixon isn’t sulking when he talks about thinking he could’ve helped the team gain that yard.

“Whoever’s out there, I have no doubt in my mind that they should make the play,” Mixon said Friday. “Coach got caught up in running two-minute and through the playoffs he had me in two-minute. It was just a caught up in the moment thing. I really should’ve took initiative on myself and just be like ‘hey, I’m coming in!’ But it was the heat of the moment.

“Third down, 3rd-and-1, obviously I wanna go run in, but when we’re going no huddle, we gotta hurry up and keep it going. Like I said, it sucks. Obviously, I know I would’ve been able to help and do whatever to get that one yard, but it’s over with, it’s last year and obviously we’re in 2022. We’re trying to go ahead and do whatever we can to repeat, get back in that same situation and when we are in that situation, you can damn sure know I’ll be in.”

He wants to be THE MAN to gain that yard. Big difference, and Taylor appreciates it.

“There’s no question. You could see that handled a million different ways,” Taylor told me. “That’s just Joe. Joe has always been a favorite of everyone that’s been around him, just talking to his college coaches, Cale Gundy (Oklahoma coach) and those guys that recruited him and coached him. He’s one of their all-time favorites. He makes an impression on this entire building.

“You see him going around signing autographs during the practice today. That’s not for show. That’s not just because there’s people. I see that when I go to his camp in Cincinnati. I’m sure people see it at his camp in California. That’s just his interaction with everybody he comes cross. He’s one of the most genuine players I’ve ever been around. He’s definitely appreciated by everyone here in this organization.”

Yes, Taylor and Mixon have had a heart-to-heart already about that or else Mixon wouldn’t have addressed the media the way he did after Friday’s practice.

“All that part we’ve moved on from,” Taylor said. “I do appreciate how he has handled himself. It can be an emotional moment.”

Taylor didn’t have a hard choice to make when electing to give him the microphone Saturday.

Again, refraining here from a metaphor about last February.

Point is, the Bengals have a game-changing running back who, as he reminded us on Saturday, plans on being a presence in the passing game, in addition to his remarkable consistency in the ground game. Of course, this assumes that Mixon has worked diligently on blitz and pass rush pickup.

Those numbers are no joke. It’s the one issue of Mixon’s game that could be pointed to as a weakness and has led to situations where he’s not on the field.

NOTES:
* Zac Taylor says he’s giving Joe Burrow his space and privacy as he recuperates from his appendectomy. There is still no timetable for his return to practice, but it certainly seems safe to assume playing in the preseason opener against Arizona on Aug. 12 is out of the question and off the table.

* The Bengals return to practice Monday and Tuesday before an off day on Wednesday. The pads will come on this week and a ramp-up period of four days to start camp.

* Zac Taylor said edge rusher Joseph Ossai is getting closer to participating in full 11-on-11 team reps during camp, as the pads come on. The edge is coming off knee surgery and playing just one preseason game last August against Tampa Bay. He has been limited to work in individual drills.

* The Bengals are clearly bringing right tackle La’el Collins (back) and Alex Cappa (core muscle) along slowly, with no need to push them at this point in camp. This means more reps for Isaiah Prince and Hakeem Adeniji at right tackle and guard, respectively.

* The punter battle continues between Kevin Huber and Drue Chrisman, with Chrisman getting 1-on-1 coaching Saturday from special teams coordinator Darrin Simmons. Huber was the holder and Cal Adomitis was the long snapper on Evan McPherson’s 65-yarder to end Saturday’s practice. Adomitis is considered an underdog to unseat Clark Harris at this point but there’s still five weeks before the Bengals kickoff against the Steelers at PBS on Sept. 11.