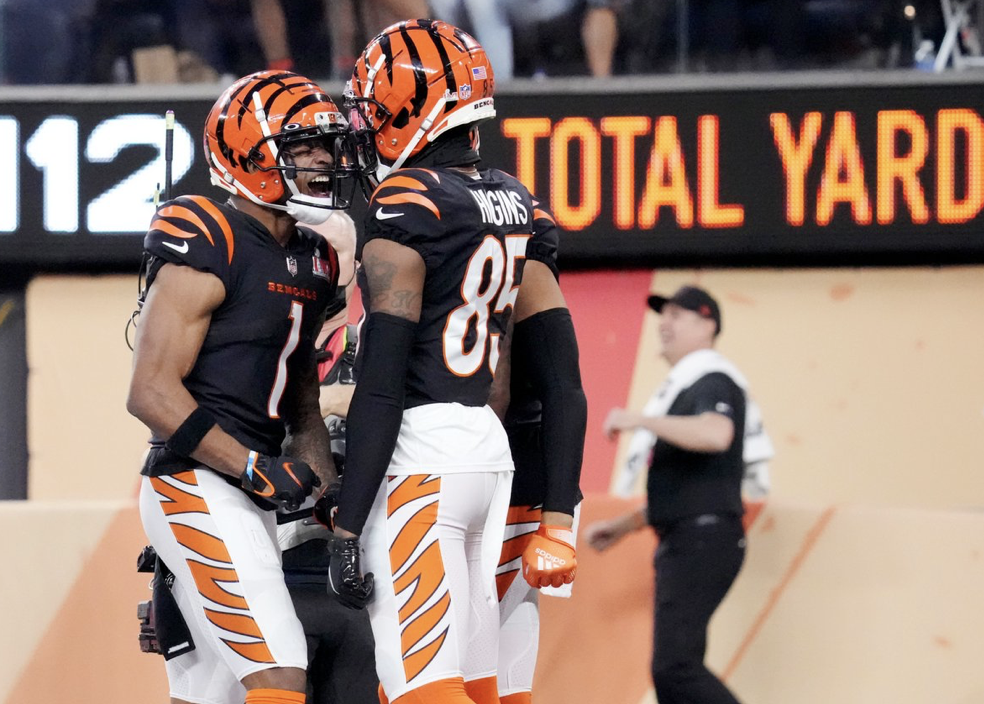 The Rams sacked Joe Burrow seven times in the game. He suffered a injured right knee in the fourth quarter on a sack by Von Miller. Burrow said he’ll have the knee examined when he returns to Cincinnati.

Matthew Stafford called tails and it was heads, as tennis legend Billie Jean King flipped the coin. The Bengals fans in attendance cheered loudly as the Bengals deferred.

Trey Hendrickson got through for a sack of Stafford on LA’s first drive, forcing third-and-17. The Bengals got the ball back at their 42 and made nine and a half yards but Burrow’s pass for Ja’Marr Chase was broken up by Ernest Jones on fourth down and the Rams took over at midfield.

The Rams responded with a pair of key third down conversions, with Stafford finding Cooper Kupp on third-and-4 at the Bengals 44 for 20 yards. Kupp beat Jessie Bates in one-on-one coverage on the sideline. Then on third-and-3 at the Bengals 17, Stafford threw a corner fade over Mike Hilton for Odell Beckham and a 17-yard touchdown.

The Bengals finally answered on their third drive when they finally picked up a first down. Joe Mixon ran for 13 yards and the first first down of the game for Cincinnati. On the next play, Burrow heaved the ball down the right sideline and Chase beat Jalen Ramsey and made a spectacular one-handed grab at the Rams 11 for a 46-yard gain. But the Bengals stalled in the red zone and had to settle for an Evan McPherson field goal of 29 yards for their first points of Super Bowl LVI.

The Rams increased their lead to 13-3 when Stafford found Cooper Kupp from 11 yards for a touchdown. Kupp ran an in toward Jessie Bates and then cut to the corner and behind Eli Apple for the easy Stafford throw.

Down 10, the Bengals desperately needed a response drive and got it in the form of a 12-play, 75-yard march, ending with a trick play that finally yielded red zone success. Joe Mixon took a pitch from Burrow and the tailback lofted a perfect pass to Tee Higgins in the back of the end zone to cut LA’s lead to 13-10.

That was cool. 😁#SuperBowl on NBC pic.twitter.com/QtR4XPQKLx

The touchdown was Cincinnati’s first offensive touchdown since Ken Anderson found Dan Ross for the second of two touchdowns late in the fourth quarter of Super Bowl XVI in Pontiac, Michigan. The Bengals only touchdown in Super Bowl XXIII was Stanford Jennings’ kickoff return that gave Cincinnati a 13-6 lead late in the third quarter in Miami.

On the next drive, the Rams were dealt a significant blow when Beckham’s knee buckled on a dropped pass over the middle. Beckham was tended to on the field before he walked off the field with assistance and made his way to the tent. He had the touchdown catch and finished with two catches and 52 yards.

The Rams drove into Bengals territory but Stafford lofted a pass for Van Jefferson in the end zone and Jessie Bates made a leaping interception. The Bengals couldn’t do anything with the possession and held the Rams once more before the half as the Bengals settled for a three-point deficit before the halftime show.

The Bengals wasted no time getting on the board in the second half. Burrow took the first snap of the second half, stepped up in the pocket and found Tee Higgins in isolation with Ramsey down the left sideline. Higgins freed himself from Ramsey at the Rams 25 and ran untouched into the end zone for Cincinnati’s first lead, 17-13.

Things got even better for the Bengals when Chido Awuzie picked off a Stafford pass over the middle off the hands of Ben Skowronek. But with the ball at the Rams 31, the Bengals could only manage a 38-yard field goal from Evan McPherson. Still it put the Bengals up, 20-13.

The Rams moved the ball down the field and had to settle for a 41-yard field goal from Matt Gay after a reverse pass from Cooper Kupp went over the head of quarterback Matthew Stafford.