Bengals defense has worst outing of the season in upset loss. 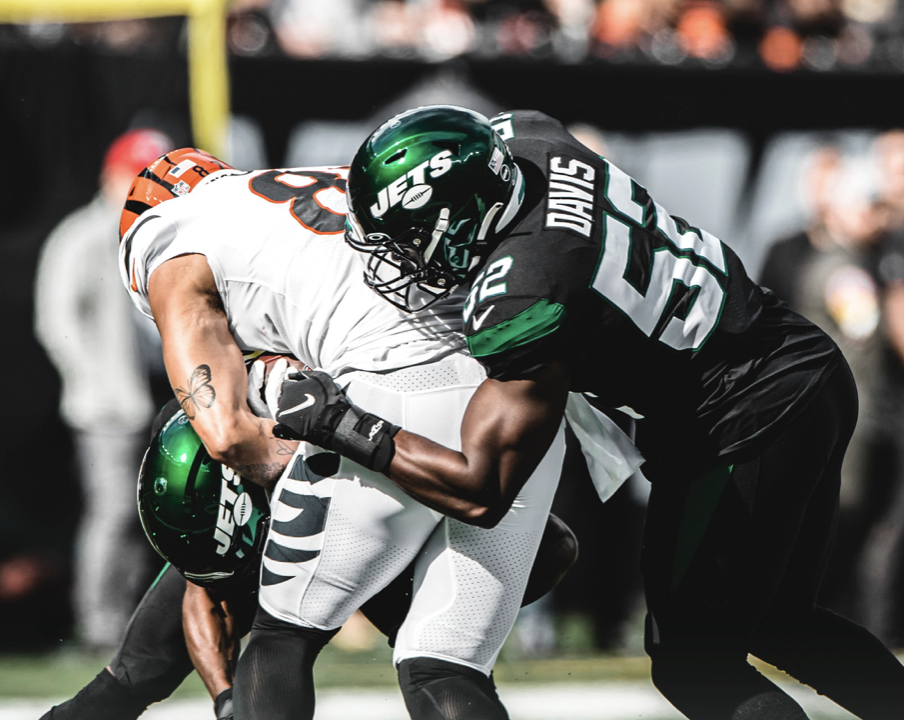 EAST RUTHERFORD, N.J. — The Bengals expected a scare on Halloween from the Jets, and they certainly got one. It was a nightmare in the Meadowlands.

With the crowd chanting his name in the final minutes, Mike White, filling in for the injured Zach Wilson, threw for 405 yards on 37-of-44 passing and led the Jets past the Bengals, 34-31, at MetLife Stadium. White’s touchdown pass to former Bengal tight end Tyler Kroft following a Joe Burrow interception at the line of scrimmage by Shaq Lawson put the Jets ahead 34-31 after the Bengals appeared headed for a win.

MIKE WHITE IS OVER 400 YARDS AND WE HAVE THE LEAD#CINvsNYJ on CBS pic.twitter.com/lY2lz9Bocq

Burrow threw three touchdowns on the day, to Joe Mixon, Ja’Marr Chase and Tyler Boyd, in the losing effort.

The loss drops Cincinnati to 5-3 on the season, dropping them a half-game behind idle Baltimore in the AFC North.

White and the Jets offense had the Bengals defense on their heels immediately. White completed all seven passes on the game’s opening drive. White, filling in for the injured Zach Wilson, completed passes to five different receivers, mostly on short routes with no Bengal defenders within five yards.

The Bengals looked out of position on several plays as the Jets marched down the field in 10 plays, capped off by an eight-yard run off the left side on a toss pitch to Michael Carter, who was barely touched as he raced into the end zone for a 7-0 Jets lead just 6:22 into the game.

The Bengals went three-and-out and the Jets were driving again at midfield when a pass was picked off by Jessie Bates and returned 66 yards to the Jets 1. But incredibly, the Bengals went backwards after being handed a gift. Joe Mixon lost one and two yards on consecutive rushes before Burrow was sacked back at the 15 on fourth-and-goal from the four.

Germaine Pratt, who was victimized often by White and running back Michael Carter in the pass game in the first two drives, came up with the second Bengals interception. This time, the Bengals would convert when Joe Mixon, who made a great one-handed grab at the one-inch line, ran it in on a hesitation run.

After a Jets punt, the Bengals answered with a more conventional touchdown drive, going 70 yards in eight plays, highlighted by two sensational passing plays. Tee Higgins made a one-handed grab at the two-yard line. That was followed by a dart from Burrow to Ja’Marr Chase in the corner of the end zone that put the Bengals ahead, 14-7.

Vonn Bell forced the third Jets turnover of the first half when he stripped Jamison Crowder after a 15-yard catch-and-run. Bell stripped and recovered the ball at the Bengals 47. A double pass from Burrow to Tyler Boyd to Joe Mixon had the Bengals first and goal at the Jets 7. An offsides set the Bengals up 2nd-and-goal at the four but the Bengals had to settle for a 21-yard Evan McPherson field goal and a 17-7 lead.

Some early trick-or-treating. 👻 BOYD to MIXON

The Bengals were the ones victimized by points before the half this time as they allowed Mike White to drive the ball 67 yards in eight plays before a toe-drag TD catch from Braxton Berrios. The catch with 15 seconds left in the half came after Keelan Cole’s spectacular one-handed grab in the end zone was overturned by replay.

Burrow did not have a smooth first quarter, as he was sacked twice and fumbled on a strip sack that was recovered by the Bengals.

The Bengals failed to get their offense going on the first drive of the second half and mysteriously went with a low-percentage fade to Tee Higgins on third-and-6 from midfield. The Jets drove right down the field, thanks to a highly questionable roughing the passer penalty in which replay showed Cam Sample was pushed into Mike White. White hit his head on the turf hard and was tended to for several minutes on the ground.

Emergency quarterback Josh Johnson came on and finished the drive, almost connecting with Keelan Cole for a touchdown. But the wide-open Cole dropped the ball and the Jets settled for a game-tying 24-yard field goal.

Joe Burrow answered almost immediately with a perfect 54-yard connection with Tee Higgins to the Jets 8. Burrow found Joe Mixon in the left flat for Mixon’s second touchdown of the day and a 24-17 lead.