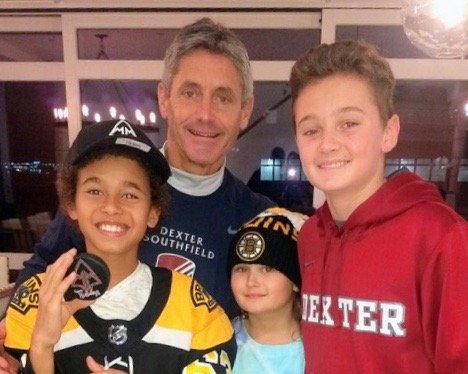 Jon and Gunnar Larson missed the family trip to Florida.

It wasn’t by accident. Gunnar, 13 and a player on the Brookline Warriors Peewee Triple-A team, had games to play. Jon, 56 and his father, had to get him there. As many New England families know, youth hockey comes before any sort of vacation. They were to spend Gunnar’s spring break in hockey rinks.

Those games, however, were part of the mass cancellations due to the COVID-19 pandemic. So the father-son duo had some extra time on their hands.

As they saw more and more players from around the sports world, specifically Zion Williamson and Sergei Bobrovsky, donate their own money to arena workers Friday night, it got them thinking about what they could do to help TD Garden employees who weren’t being paid due to the suspended season.

“Well,” Gunnar, a middle schooler at Dexter Southfield, said. “Somebody should do something.”

They woke up last Saturday morning determined, and for good reason. They live in the North End, which has allowed them to get full usage of their Bruins season tickets since they’re a stone’s throw away from the Garden.

That’s allowed them to also become close with many of the arena employees.

“We’ve ended up knowing a lot of people who work at the events,” Jon, a finance professional, said. “Getting to know them personally and befriending many of them, maybe not deep friendships but strong friendships, mutually respectful relationships. We learned of their plight and also started to learn about some of the financial data and the enormity of the workforce there.

“It’s upwards of a thousand people and we were struck by the size of it and what a tough spot they were in.”

When Gunnar goes to Bruins games, he spends his intermissions at the Xfinity Zone playing NHL 20. He’s gotten to know the people who work that section of the arena and they always let him right in to play.

“There’s not a lot to do between the periods,” Gunnar explained. “I usually just go up there and play some NHL.”

Since they attend over 25 games per season, they’ve also become close with the concession workers.

“We generally get our beer and food from Jimmy, Nelson and Nick at the concession stand at Section 10,” Jon said. “Those guys I always talk to at every game and they’re all part of the experience for us. Gunnar’s kind of addicted to Sal’s Pizza down by Section 5. You get to know these folks pretty well.”

With these employees not working and not getting paid, Jon and Gunnar realized it was their turn to step up and help them. Gunnar picked out the perfect option to raise money: starting a GoFundMe.

“I had my dad help because this was our first time doing a GoFundMe page,” the 13-year-old said.

Since neither had ever made one before, they struggled at first, laboring over the laptop and trying to figure out how to efficiently create a GoFundMe.

“Just saying, it took us a couple hours to get the Enes Kanter video up,” Gunnar said with a laugh.

Nonetheless, the duo eventually got the hang of it and the GoFundMe went live. They chose to make the goal $250,000.

Next came promotion. What helped the GoFundMe immensely had something to do with where the Larson family resides. Many Bruins players live in the North End as well and, according to Jon, have very good relationships with the community.

One of those guys was Brad Marchand.

Right after the launch of the GoFundMe, a small circle of the Larson’s friends shared it. Through those friends, Marchand picked it up and tweeted it immediately, publicizing the fundraiser to the maximum.

Some good friends started this go fund me page for the TD Garden employees. Please take a lookhttps://t.co/JCTW5hst9v

Having their favorite hockey team actively share something they created would be the main focus for many teenagers. But Gunnar’s eyes have been set on something much bigger.

“It’s cool,” Gunnar said of his favorite players sharing and donating. “But we really did this just for the employees. We weren’t trying to get any publicity or go viral. We just wanted to help the employees out and they’re really good people.”

As of right now, the GoFundMe stands at just over $36,000. Jon and Gunnar announced Thursday they’d match dollar for dollar the next $10,000 raised.

Since the fundraiser started, Jon’s received between 100 and 150 emails of support.

Jon and Gunnar’s efforts come at a crucial time, as the Bruins remain the only NHL team that hasn’t yet put out any plans to compensate employees during the stoppage. Jeremy Jacobs, owner of the Bruins and chairman of Delaware North, hasn’t yet issued a statement either.

Why Did the Bruins Fire Bruce Cassidy & Where Do They Go From Here?